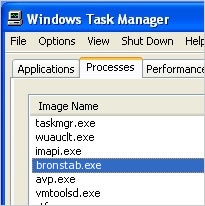 bronstab.exe is a malicious file, which belongs to W32.Rontokbro.D@mm Worm. This cyber threat is mostly spread using e-mail messages that present themselves as important notifications from reputable companies. As soon as user is tricked into downloading a malicious attachment that can also be found in a message, this worm infects the system. Once it starts running, it starts tracking its victim and gathers various data. As a result, W32.Rontokbro.D@mm Worm can steal your personal information, such as passwords and loggins, banking data, etc.

As soon as W32.Rontokbro.D@mm Worm infects the system, it installs bronstab.exe file. Typically, this executable file helps for this worm fulfil its malicious activities: it can be used for launching its components, running a destructive payload, updating it or deleting some of its files. Even if the bronstab.exe file does nothing suspicious, its presence indicates that your computer is infected with a particular threat, so please do NOT let this file stay on your system.

In order to remove bronstab.exe, we recommend using RegCure Pro.

Your opinion regarding bronstab.exe Cancel reply

You can quickly scan the QR code with your mobile device and have bronstab.exe manual removal instructions right in your pocket.