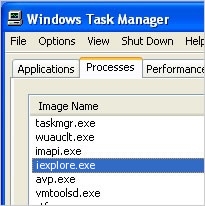 There are hundreds of various discussions on the Internet where iexeplore.exe file is called malicious. That's because malware creators use names of legitimate files in order to deceive PC users and hide their own viruses. For example: iexplore.exe filename has already been used by hackers who spread Trojan.KillAV.B, Power Key Logger, Cosdoor, Lecna, DarkSky Trojan, Boxer Trojan and many other dangerous viruses. In this case, iexplore.exe works as a file, which is responsible for launching parasites, loading their components and running a destructive payload.

If you think that iexeplore.exe is used by malicious program, you should waste no time and scan your PC system with reliable security tool. In this case, we recommend using RegCure Pro

Your opinion regarding iexplore.exe Cancel reply

You can quickly scan the QR code with your mobile device and have iexplore.exe manual removal instructions right in your pocket.