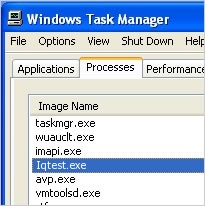 Iqtest.exe is a fraudulent file, which is responsible for launching parasites, loading their main components and running a destructive payload. According to 2spyware security experts, this file is actively used by W32.Zimuse virus. As soon as it enters computer, this threat seeks to steal user's private information, such as loggins and passwords. If you don't want to lose them, you should definitely remove W32.Zimuse from the system.

When installed by a virus, Iqtest.exe takes a significant part in implementing virus functionality. This dangerous file can be used for downloading malicious virus components, launching them, etc. By the way, after several modifications Iqtest.exe can also act as a stand-alone threat and perform its own harmful actions. Please, remove this file as soon as you notice it! For that you should consider using RegCure Pro or other recommended spyware removers.

In some cases a presence of Iqtest.exe does not mean that your system is infected. This file may actually belong to a fully legitimate application, so you should test this file before terminating it.

Your opinion regarding Iqtest.exe Cancel reply

You can quickly scan the QR code with your mobile device and have Iqtest.exe manual removal instructions right in your pocket.