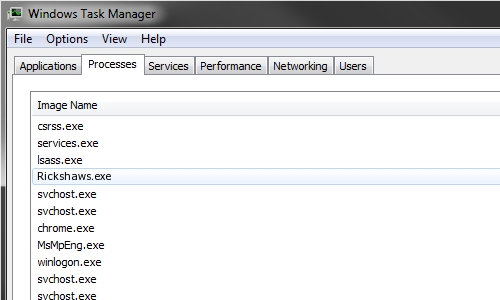 Rickshaws.exe, which is closely related to Sacrosanct.exe, is an executable file that is closely related to various ad-supported programs. This program adjusts system settings and assigns itself to startup programs. As you have guessed, this program silently runs in the background, at the same time connecting to numerous ad networks via user’s network connection and fetching third-party ads. Obviously, such sneaky activity decreases the performance of the infected computer, making it run slow. What is also bad is that this adware-type program does not leave any clear traces on the computer that would inform the user about its existence – it does not create Desktop or Start menu icons. The only location where you can find a sign indicating that it exists at all is Windows Task Manager; to be precise – Processes list. It is easy to understand that this program has something to do with system slowdowns and lags, because it utilizes nearly 80 percent of computer’s power.

The most evident and annoying sign indicating that Rickshaws.exe virus has been installed on the system is bothersome audio ads, which might start playing right after the user launches an Internet browser. It appears that this untrustworthy program can install modified versions of Google Chrome or Mozilla Firefox browser and place their shortcuts instead of original ones on Desktop or in Start menu. Once launched, such altered browser versions start playing a random audio advertisement. Rickshaws.exe adware might also start sending pop-up, pop-under, in-text and banner ads. Do not be deceived and do not start thinking that this application is harmless – ads that it displays are untrustworthy and can open completely shady Internet pages once you click on them. To avoid annoyance that it causes and to save yourself some time, we suggest you to remove Rickshaws.exe from the system and protect it using anti-malware software. To delete Rickshaws, use Reimage Reimage Cleaner or a similar program capable of removing malware/spyware threats.

How can this file get on your PC?

Considering the fact that adware-type programs are not malicious, it would be wrong to say that this one can sneak into victim’s computer system without user’s permission. In fact, the user typically gives the authorization to allow programs like Rickshaws.exe hijack the computer system unnoticed, but he/she generally does not realize that. It happens because such undesirable executive files and other system tools spread via software bundles, which can be downloaded from the Internet for free. A software bundle is a pack of programs, and all of them can be installed at once in case the computer user is not attentive enough. The problem is that a software bundle typically looks like a single program, and all additional programs are hidden in installation settings. If the victim chooses wrong settings to install the desired program, all additional programs will be installed, too. If the user makes a right decision and selects correct installation settings, he/she gets an opportunity to see all additional programs and refuse to install them. Remember – the wrong settings are Default/Standard ones, and the right ones are Custom/Advanced ones, so make sure you opt for the second option at all times!

How to remove Rickshaws.exe from the system?

If you have noticed that your browser acts suspiciously and that never-ending annoying ads appear on the computer screen on a daily basis, it is definitely a sign that you should check your computer system for Rickshaws.exe virus. You can try to remove Rickshaws.exe manually, but we do not recommend you to do that. Remember – ending this process in Windows Task Manager will solve the problem only for a short period of time, and in order to complete Rickshaws.exe removal, you need to find and eliminate all of its components, registry keys, and other files that can be related to it. The easiest way to catch them all is to run a system scan with malware removal software, for instance, Reimage Reimage Cleaner .

Your opinion regarding Rickshaws.exe Cancel reply

You can quickly scan the QR code with your mobile device and have Rickshaws.exe manual removal instructions right in your pocket.