Microsoft is known to release updates in a fixed day in a week, and that is Tuesday. This day even has a name “Patch Tuesday”. Yesterday was the first tuesday of this month, so the regular Microsoft update patch was ready to go. It bundled of more than 23 vulnerabilities that include fixes for all the exploits that could affect Microsoft Office, Windows, the .NET Framework or Silverlight.

The vulnerabilities that may lead the malicious software to run code without user interaction are marked as “Critical”, as these are the worst vulnerabilities for Microsoft. The MS12-034 patch is aimed to fix attack vectors exploited by Duqu, which targets industrial control systems. Another patch, called MS12-029 fixes a remote code execution exploit when user opens an infected RTF file.

Always remember to update, and if you have your auto-update feature off, you should click on the windows update icon on the “Start” menu to get the latest security updates. Additionally, Adobe released an update too, for Adobe Illustrator, Photoshop, Flash Professional and Shockwave Player. All Windows and Mac computers who run Adobe Shockwave Player should update their software to the newest version (11.6.5.635 currently). 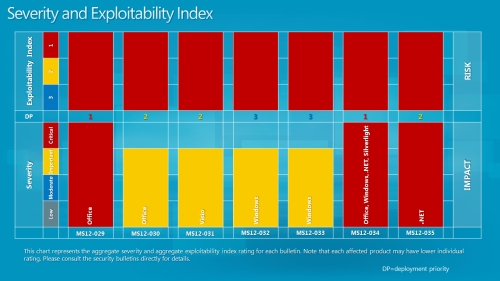