Some time ago I decided to download Ividi. Unfortunately, but it turned out that it is just a totally misleading app causing annoying pop-up ads and other problems for me while I am browsing on the Internet. Can you help me to remove this Ividi malware?

Unfortunately, but there are hundreds of similar questions on the Internet. People keep installing questionable tools without checking them first and lead themselves into various problems. This post will help you to know more about Ividi plugin, which, instead of malware, should be categorized as a browser hijacker and a potentially unwanted program.

So, what is known about Ividi Search?

Ividi Search (or Ividi.org) is a very questionable search engine, which is also known as a browser hijacker. It is one of these sneaky programs that show up on computer out of nowhere. In most of occasions, this hijacker infiltrates the system in a bundle with free applications, such as torrent files, games, tools, updates and unlicensed programs. As soon as it enters its target computer, this program alters the start page, the default search engine, the new tab page and other system settings. As a result, you may notice that you can’t use your favorite search engine anymore because Ividi Search keeps redirecting you to predetermined sites. What can also be expected when having this program on the system?

Note that these activities can be avoided only by removing Ividi plugin from the system. You should do as soon as possible because there is no guarantee that you won’t be tricked into revealing your personal information or visiting a very questionable website. The main reason, what Ividi Search is used for, is making the money. That is why you may receive altered search results and misleading pop-up advertisements during your searches. 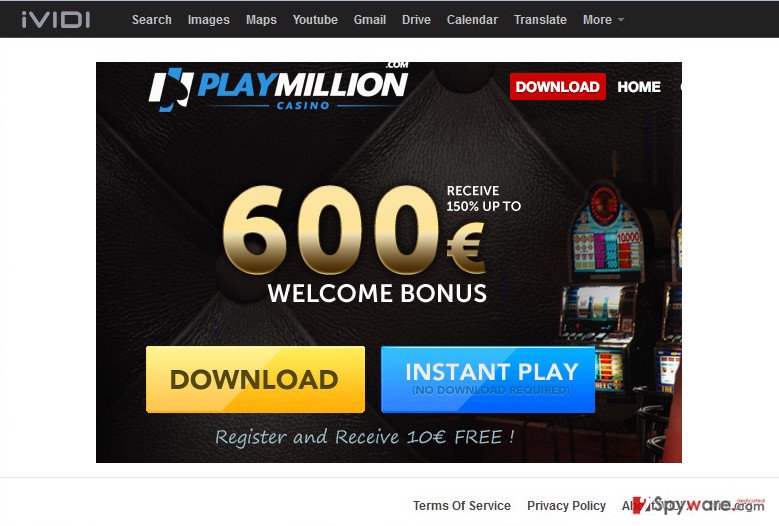 How can Ividi hijack my computer?

As we have already mentioned, Ividi plugin virus is usually promoted using unfair distribution method called bundling. When in use, this method relies on various freeware and shareware that is typically presented as a very useful software. Unfortunately, but trusting such developers and downloading such apps to the system without monitoring them can lead you to a long list of issues. Some of them have already been mentioned in this post. However, you can never know how often the developers of such hijackers update their programs.

If you want to avoid Ividi helper object or any other potentially malicious program, you have to pay more attention to the installation process of the freeware. Typically, you should find the check mark that agrees to download Ividi Search on the system or agrees to change the homepage to search.ividi.org. If you missed the infiltration of this program, now you may notice that your browsers are compromised, and you can’t use them properly. To stop Ividi redirect activity, you should remove it from the system.

Ividi virus removal from the system:

If you are one of these PC users who were tricked into downloading Ividi plugin virus, you should remove it. The easiest way to do that is to download one of these tools that are given below. They will help you to check your system and will find for you all suspicious registry entries, files and similar components. Of course, having one of these programs will also help you to prevent such programs in the future.

Of course, we should also mention that you can use manual removal of Ividi. However, you should be very careful when using each of these removal steps given below to avoid removing useful system components.

Once these steps are finished, Ividi Search should be removed from your Microsoft Edge browser.

Get rid of Ividi Search from Google Chrome

You can quickly scan the QR code with your mobile device and have Ividi Search manual removal instructions right in your pocket.