The developers of KillDisk continue to upgrade their cyber infection 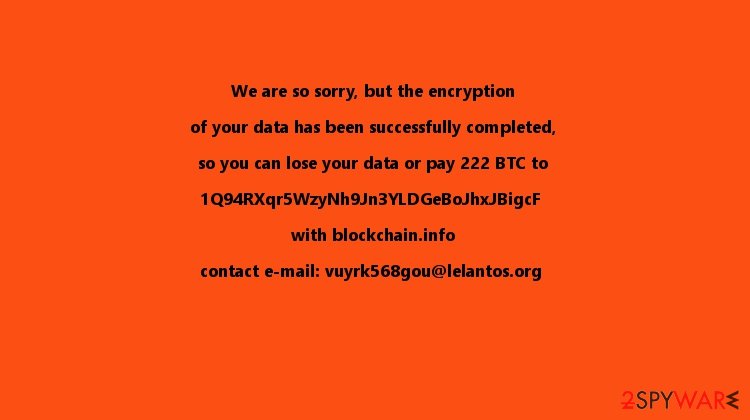 KillDisk was first developed as a disk-wiping malware helping criminals to hide their traces. However, crooks followed the success of infamous ransomware families, like Locky and CrytpoLocker, and upgraded the virus with file-encrypting features. Currently, experts have discovered a new variant of this dangerous threat which only poses as ransomware.

In the previous version of the ransomware, the crooks decided to play big and demand 222 bitcoins in exchange for the files! Users may dread after finding such cyber-mutant on their operating system. Nonetheless, virus researchers work restlessly to combat the cyber threats. If this menace targeted your computer as well, initiate Killdisk removal. ReimageIntego speeds up the procedure.

KillDisk malware is capable of wreaking an operating system and making a device completely unbootable. Due to its destructive features of paralyzing the system, the felons aimed it at industries and big corporations. It has been combined with other trojans, such as BlackEnergy virtual infection, to deliver a destructive attack on an energy supply company.

Such assault ended in the cease of electricity for about 1,4 million of Ukrainian population on December 23rd in 2015. It seems that such effects did not satisfy the racketeers. Therefore, they have modified KillDisk malware into a file-encrypting virus which is not only capable of wiping the data on your local drives and but encode them.

It has also demanded an astonishing ransom of 222 Bitcoin which is equal to $2 457 097 at the moment. This threat employed an RSA-1028 algorithm to encode files. Also, the modified version of KillDisk encrypted local hard-drives and network-mapped folders.

Killdisk Wiper malware was using lelantos.org to cover their tracks, but specialists of CyberX suspect that the hackers known as TeleBots might be behind the attacks [1]. The gang has become quite interested in ransomware assaults as it has significantly increased the number of their attacks in this specific field [2].

Likewise, people are advised to stay extremely cautious and protect their computers from this dangerous malware and its versions. In case you have encountered this cyber threat, immediately reboot your computer into Safe Mode and remove KillDisk. You can find the instructions on how to get rid of it below.

Experts have recently spotted new KillDisk malware attacks. Even though the disk-wiping functions and the ransom note are still there, criminals have switched their targets from Ukraine to Latin America. Their primary goals continue to stay big financial corporations which are demanded to pay 222 BTC ransom.

This fake KillDisk ransomware delivers the ransom note only to trick people believing that they were hit by the file-encrypting virus while it wipes out the disk and leaves no traces. Experts say that the malware is not directly installed on the computer rather than delivered by another cyber threat.

According to the analysis, the new variant of KillDisk is capable of hiding itself as well — it enters the system, copies itself to the memory, deletes the load from the disk and changes its name. Later, it randomly renames the filenames before removing them. The only files that are left are the ones vital for the operating system:

Afterwards, KillDisk fake ransomware tries to wipe out the disk by overwriting the first 0x20 sectors with 0x00 by reading the Master Boot Record (MBR) which is also used to do further damage to the system. Following such actions, it waits 15 minutes before shutting down the computer by terminating these processes:

KillDisk uses ExitWindowsEx function to force the restart of the computer while disrupting csrss.exe and wininit.exe processes will deliver the Blue Screen of Death (BSOD). Likewise, the machine will be forced to reboot with or without user's permission.

After the restart, computer's owner will no longer be able to use his/her device unless the damaged MBR records are repaired. Once the system is examined by the IT technician, he/she will probably find only the ransom note and believe that it was attacked by the ransomware.

Previous modifications made to the disk-wiping malware

KillDisk wiper malware was previously modified into the ransomware. However, criminals decided to upgrade it and make it suitable for Linux operating systems. There are several alterations made which differ from the Windows OS version and are worth mentioning.

In comparison with the version devised for Windows OS, its encryption methods differ from the former version. Specifically, the ransomware employs Triple-DES algorithm which runs 4096-byte cipher blocks to generate a unique decryption key. In addition, it targets a wide range, specifically, 17 subfolders to encode files.

Killdisk malware, designed for Linux, appends “DoN0t0uch7h!$CrYpteDfilE” extension. However, the improvements do not only encompass modifications regarding encryption methods. The cyber infection modifies boot settings. It results in the ransom message being displayed as a start-up window.

It contains the exact information as provided in the malware designed for Windows. Victims are supposed to purchase 222 Bitcoins and then transfer them to the indicated address. In addition, the hackers give an email address for contact purposes– vuyrk568gou@lelantos.org.

However, do not follow the hackers' scenario but, instead, opt for the alternative solutions. Remember, you can find ways how to recover corrupted data at the end of this article. Note that some of them might only recover individual files. Likewise, try all provided techniques for the best result. 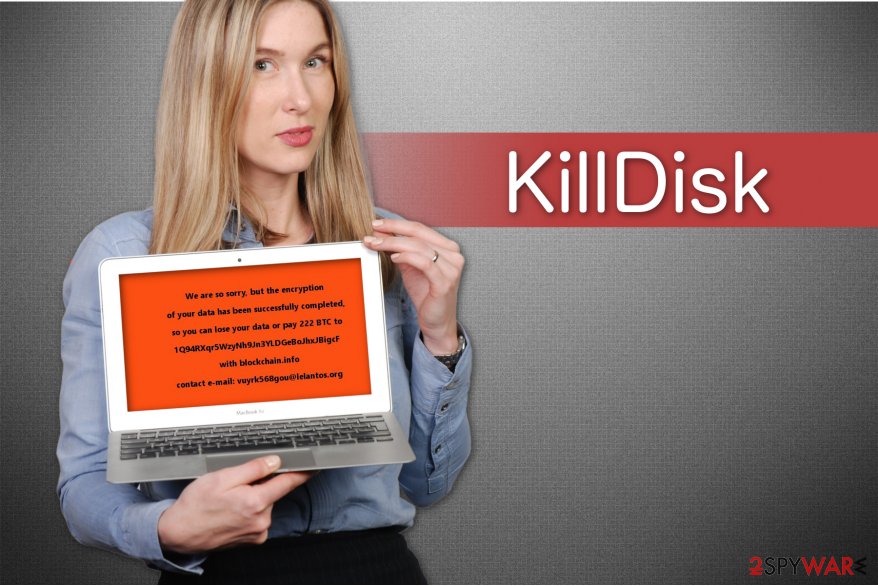 KillDisk is a data-wiper which has been upgraded with ransomware-like features.

Most common ways how malware infiltrates the targeted system

Just as any other dangerous cyber threat, this disk-wiping malware attacks its targets via malicious spam emails. Such malspam campaigns usually take advantage of naive computer users and deliver letters which disguise as well-known companies.

Experts from BedyNet.ru[3] report that some of the emails may look like as the messages sent from the OPM (Office of the Personnel Management). Note that the letters are genuine-looking and can easily trick to open the malicious attachment appended to it. Unfortunately, if you click on it, your computer will be infected with the original KillDisk malware or one of its versions.

Luckily, you may suspect a spam email possessing a virus. Such messages contain typing or spelling mistakes. Also, you should boost up the overall protection of the device by combing an anti-virus and anti-spyware utility. It will help you not only to get rid of KillDisk but also protect your computer from cyber infections in the future.

We would like to ask you not to try to remove KillDisk virus by yourself. This is a highly sophisticated and complex malware which is able to not only hide its traces but also impersonate legitimate computer processes. Therefore, there is a high risk of terminating crucial OS executables instead of the malware.

However, you can get a professional antivirus software to help you with KillDisk removal. You can use ReimageIntego, SpyHunter 5Combo Cleaner, or Malwarebytes. They are tested and recommended by our IT experts. In case you already have a security tool, feel free to use it as well. Others might need to reboot their computers into Safe Mode before the installation of the antivirus.

If you are not aware how to boot your system into Safe Mode, you can follow the guide below. Later, download the security software and let it scan your files thoroughly. Shortly after, it will uninstall KillDisk, and you will be able to recover your files using alternative methods which are also provided below.

In case the ransomware has infiltrated your Windows system, follow the guidelines to reboot your computer into Safe Mode with Networking.

Another way to disable the virus is to boot your system into Safe Mode with Command Prompt.

Guide which is presented above is supposed to help you remove Killdisk from your computer. To recover your encrypted files, we recommend using a detailed guide prepared by 2-spyware.com security experts.

If your files are encrypted by Killdisk, you can use several methods to restore them:

This is a professional tool designed to not only help people if they have accidentally deleted important files but also if they are attacked by the ransomware.

This is a useful feature if you have previously enabled System Restore function. However, note that it recovers only individual files.

ShadowExplorer can help you

This software uses Shadow Volume Copies to help people recover files after ransomware attacks. Therefore, if they are in place you can follow the instructions below:

Unfortunately, experts have not developed KillDisk decryptor just yet

Finally, you should always think about the protection of crypto-ransomwares. In order to protect your computer from Killdisk and other ransomwares, use a reputable anti-spyware, such as ReimageIntego, SpyHunter 5Combo Cleaner or Malwarebytes

You can quickly scan the QR code with your mobile device and have Killdisk ransomware virus manual removal instructions right in your pocket.