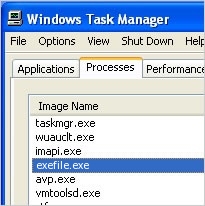 exefile.exe is an executable process, which may appear on your computer after installing EVE Online, EVE, the Second Genesis and other games. In most of the cases, it can be found in “C:\Program Files” subfolder.

Malware creators use the names of legitimate files in order to hide their viruses! If exefile.exe is located in C:\Windows folder, you can be sure that it's dangerous. Such executables are typically used for launching certain parasite components or running a destructive payload.

Previously, scammers had been using the exefile.exe file for launching rogue anti-spyware, which is known as Internet Security 2011. This process was used to work silently in the background and perform harmful actions, such as update virus, download required files or even unnoticeably delete them. However, no one can guarantee that it is not used for spreading other viruses that belong to rogues.

In order to check the trustworthiness of exefile.exe file, we highly recommend using RegCure Pro.

Your opinion regarding exefile.exe Cancel reply

You can quickly scan the QR code with your mobile device and have exefile.exe manual removal instructions right in your pocket.