HTML:Script-inf is a script that is hosted on the malicious sites to propagate malware 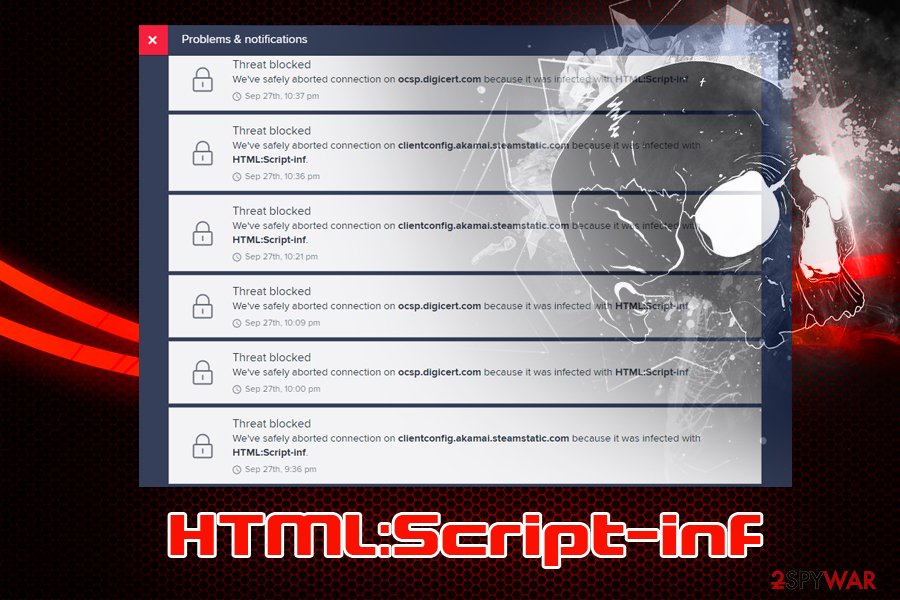 HTML:Script-inf is a generic detection used by multiple AV engines to describe a malicious script that is embedded into websites. Virus authors might hack these sites or create them themselves. Thus, under certain conditions, if users visit such compromised domain, they might unintentionally and without any warning install malware on their device. HTML:Script-inf virus can be related to a variety of activities, including data theft, keylogging, data-locking, etc. – its capabilities depend on what type of malware hackers host. Generally, such detection by anti-virus software does not mean that the visitor is infected; however, those who do not employ security measures might get infected with a nasty cyberthreat. Otherwise, the user should simply leave the website compromised by HTML:Script-inf and never return to it.

HTML:Script-inf is basically a part of a drive-by-download or drive-by-install technique used by cybercriminals to install malware on users machines. For this scheme to work, certain conditions must be met, including:

Once those two conditions are met, a virus is downloaded and populated on the user's computer. The only way to remove HTML:Script-inf malware is by using sophisticated anti-virus scanners. Note that some infections, like adware or browser hijackers, can be terminated without security software. However, drive-by-download technique is used to install much more severe threats on devices.

Some users complained that their antivirus is constantly blocking a variety of websites by using HTML:Script-inf detection. This means that the infection is already present on the device, and malware managed to save malicious files on the host machine. In such a case HTML:Script-inf removal should be performed as soon as possible.

Generally, those who employ reputable security software can avoid any threats related to HTML:Script-inf virus. Therefore, you need to make sure that your machine is protected from malicious scripts, as they can be embedded into legitimate sites by cybercriminals (one of such compromised sites was cruisecritic.com)[2]

If your device has been compromised, you need to detect and eliminate malware. After that, experts[3] recommends using software that can fix virus damage, such as Reimage Reimage Cleaner Intego. 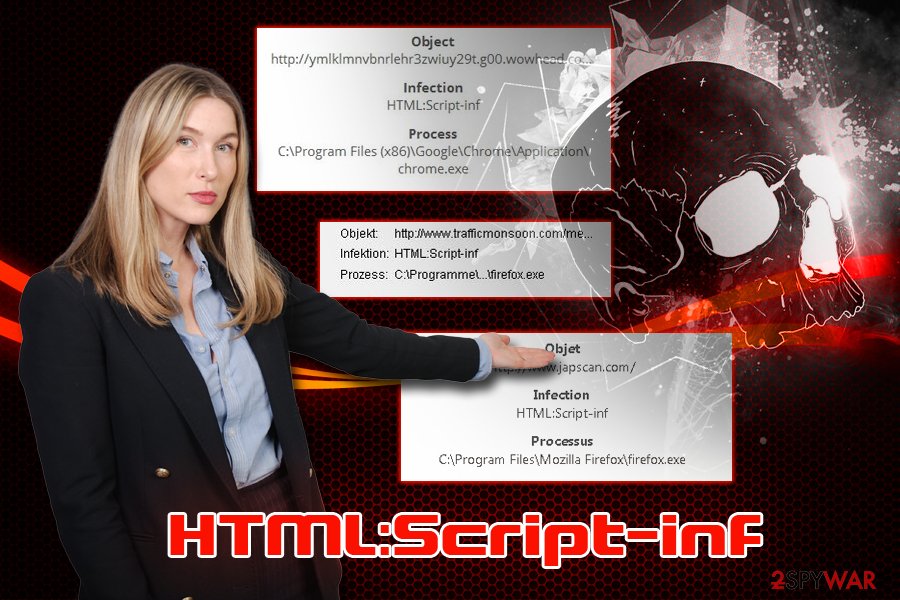 HTML:Script-inf is a script designed to automatically install malware on visitors' devices

Precautionary measures to avoid malware on the internet

Malware usually does not emit any infection symptoms, as hackers want to make sure that the malicious payload can stay on the device as long as possible and execute what it's been programmed to do. For example, a compromised device might record every keystroke performed by the victim, recording such data as emails, banking details, passwords, etc. Without a doubt, such activity is extremely dangerous for the user.

Due to malware's stealthy behavior, the threat might be present on the machine for weeks or even months before it is detected. Thus, it is best to avoid cyber infections altogether, and make sure the precautionary measures are used:

Terminate HTML:Script-inf with the help of reputable security software

To remove HTML:Script-inf virus, you will have to use professional security software. There are plenty on the market available, but be aware that detection rate might vary from tool to tool, depending on what type of malware was injected into your device. Thus, a scan of several AV engines might be needed until the threat is detected and eliminated.

In some cases, the virus might interfere with security software and prevent it from working correctly. In such a case, you should enter Safe Mode with Networking and perform a full scan from there. You will find all the instructions below.

Remove HTML:Script-inf virus in the Safe Mode by following this step-by-step guide:

You can also use System Restore to stop the threat:

Finally, you should always think about the protection of crypto-ransomwares. In order to protect your computer from HTML:Script-inf and other ransomwares, use a reputable anti-spyware, such as Reimage Reimage Cleaner Intego, SpyHunter 5Combo Cleaner or Malwarebytes

Your opinion regarding HTML:Script-inf Cancel reply

You can quickly scan the QR code with your mobile device and have HTML:Script-inf manual removal instructions right in your pocket.