MessengerPlus is an alleged communications app that feeds users ads 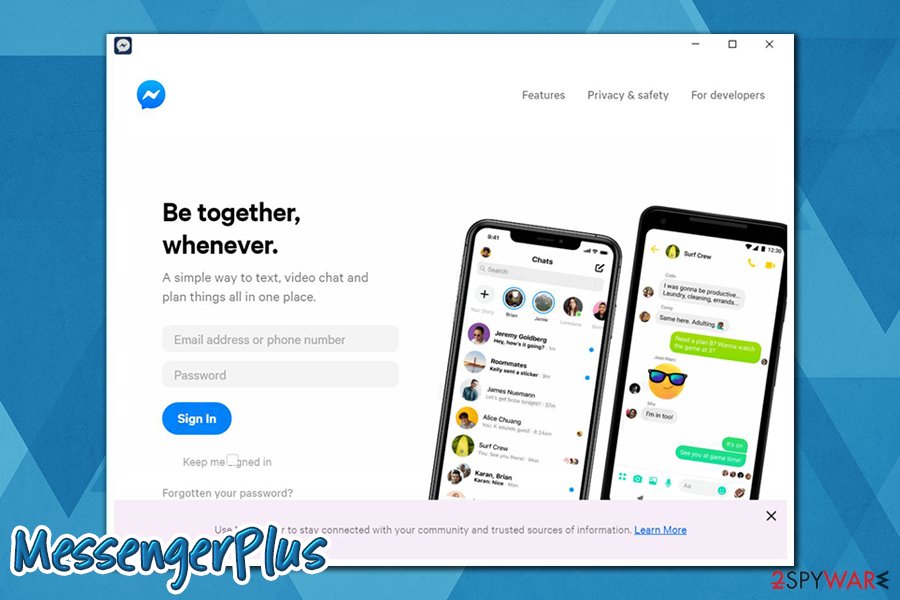 MessengerPlus is a potentially unwanted application that can be downloaded either intentionally or along with other programs from third-party websites. In other cases, users might also be tricked into downloading the app via fake or scam websites that deliberately mislead users into doing so.

Allegedly, MessengerPlus is a desktop version of the popular Messenger application that can be otherwise accessed via the Facebook social network site. While many might find such functionality useful, it is important to note that the app is actually a potentially unwanted program – adware,[1] which injects pop-ups, in-text links, banners, offers, deals, and other ads into Google Chrome, Mozilla Firefox, Safari, MS Edge, or another web browser. Besides, MessengerPlus can also harvest and share information about users' web browsing activities for marketing purposes.

In most cases, adware is developed in order to make revenue from advertisements that can come in various forms, such as interstitial, pop-ups, auto-play videos, and other intrusive forms. These ads do not originate from the websites that users land on but rather are injected as a new layer by a potentially unwanted program installed on the machine – MessengerPlus in this case.

In the meantime, users believe that they have downloaded a simple app that could help them use a useful communications app via the desktop, not realizing that ads are coming from it. In some cases, however, users might notice markings like “Ads by MessengerPlus” or “MessengerPlus Ads” on various pop-ups and windows, although this might not always be the case.

As a result, users will not be aware that they need to remove MessengerPlus in order to stop the intrusive behavior. What makes matters worse is that advertised content can often mislead users into installing additional PUPs on their system, resulting in more ads and redirects. In the interconnected ad-networks, developers of such programs gain financial benefits for each shown/clicked ad, all while users' web browsing experience gets ruined.

However, MessengerPlus ads are not the only issue users should be worried about. For example, redirects (once the ads are clicked, or upon entering a random website) might lead to scam, phishing, or malicious website that could execute scripts in the background, launching automatic downloads of malware.

This scenario can always be prevented with fully patched software that is installed on the computer, as security updates fix vulnerabilities[2] that programs might have. These are used by hackers to infiltrate machines and install such threats like ransomware, Trojans, crypto-malware, spyware, keyloggers, and others. This way, the MessengerPlus virus can cause much more serious damage than initially anticipated.

Another reason for MessengerPlus removal is information tracking. Most adware apps monetize not only on delivered ads but also by harvesting and sharing/selling the information they collect about users that have the app installed on their systems. For that, tracking technologies like cookies, web beacons, and others are used. The most commonly tracked data includes:

This information can later be used by MessengerPlus developers to deliver more attractive ads to users – this technique is called targeted advertising. However, as new regulations are being released, websites and other parties need to inform users about what data is being gathered about them, and how to opt-out of this practice. Unfortunately, not all programs and websites are compliant and still collect information without permission.

All in all, we recommend you uninstall MessengerPlus from your machine and not risk your privacy and security due to the functionality it provides. For a broader check, we also advise performing a full system scan with anti-malware software. If something was found, you should also reset the web browsers as explained below and then repair the system damage that was done with Reimage Reimage Cleaner Intego or similar apps. 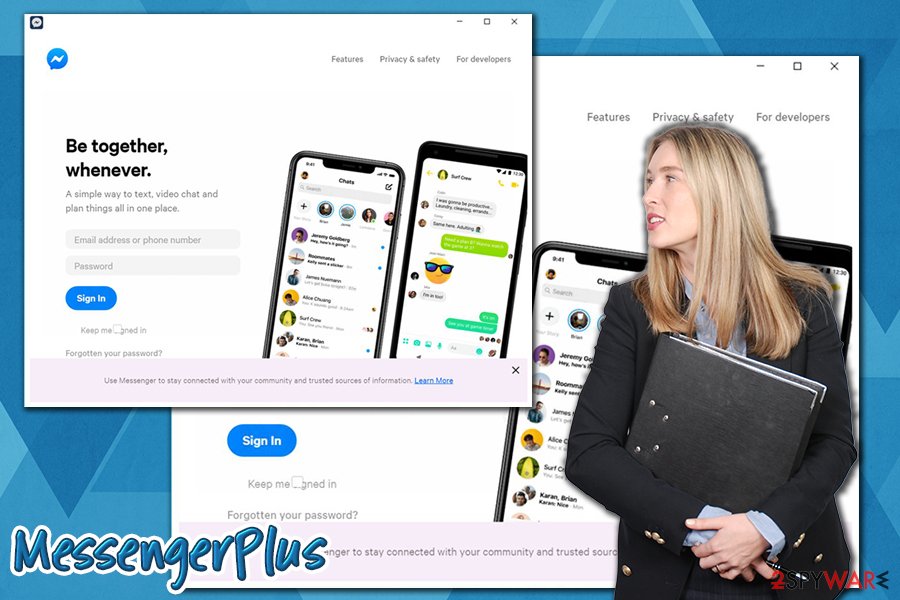 Browser safe without adware on your computer

The best way to protect yourself from unneeded risks is to avoid potentially unwanted applications in the first place. However, since most of these have a relatively shady background, they are often distributed in deceptive ways, making users install PUPs unintentionally. The installation is almost always performed by the user – this is one of the main differences between adware and malware. Despite this, adware is one of the most widely distributed unwanted software in the world, and security researchers recently spotted a huge rise in adware developed for macOS, which even surpassed Windows machines.

Most commonly, adware gains access to users' systems when they install it themselves, without realizing it. The very popular technique is used for that – software bundling. Many users are still seeking to download new apps from third-party websites (even though there are millions of programs available on the official sources), and such site owners and freeware developers often combine several apps into a single package. In such an installation wizard, the optional app is often deliberately hidden from sight, so users do not know it included in the first place.

In other cases, users might download PUPs and other unwanted software through sources like torrent sites, or by clicking on a fake download button on an unreliable site. To avoid these issues, it is important to be aware and never rush the installation process. Here are some tips from industry experts from dieviren.de:[3]

Get rid of MessengerPlus for good

If you discovered an unwanted application on your system seemingly out of nothing, you should not hesitate to remove MessengerPlus. If left installed, the app would feed you intrusive advertisements and, in some cases, even accidental clicks might lead you to dangerous places on the internet. As a result, you might disclose your personal information to cybercriminals or install other unsafe apps, or even malware.

For MessengerPlus removal, you can use the manual guide provided below – simply access the installed application list and uninstall it. However, in some cases, the entry might be simply missing, or the process might return errors. In such a case, we instead recommend using reputable anti-malware software that can detect and eliminate adware from your computer automatically.

If you keep seeing ads after you get rid of the MessengerPlus virus, you should also reset all the installed browsers get rid of cookies and other pre-set settings that might be directing you to sponsored content.

To uninstall MessengerPlus from a Windows machine, follow these steps:

Once these steps are finished, MessengerPlus should be removed from your Microsoft Edge browser.

Get rid of MessengerPlus from Google Chrome

In case you are still seeing ads and differing from browser redirects after PUP removal, reset Google Chrome as explained below:

Your opinion regarding MessengerPlus Cancel reply

You can quickly scan the QR code with your mobile device and have MessengerPlus manual removal instructions right in your pocket.