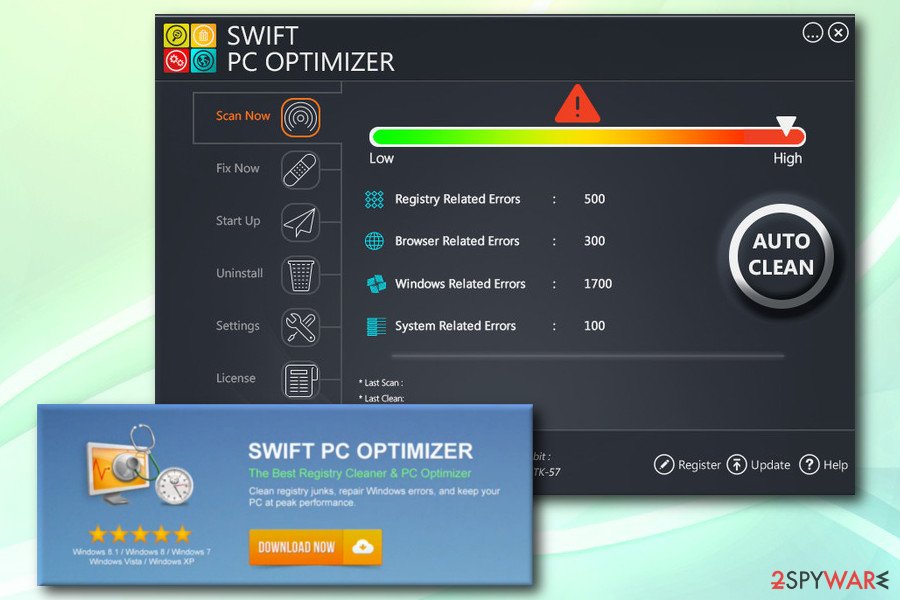 Swift PC Optimizer is an alleged PC optimizing tool that helps users to automatically detect internet junk files,[1] registry errors, cookies, and other files. However, security experts[2] consider this application to be a potentially unwanted program. It is not a direct threat to users’ computers; however, it can lead to some serious issues after prolonged use.

Just like many other fake system optimizers (PC Optimizer Pro, Wise System Mechanic, PC Fixer Pro 2018 and many others), Swift PC Optimizer typically finds multiple errors and “issues” as soon as it performs a full scan. If users want to fix these problems, they are prompted to buy a full version of the program.

We do not recommend purchasing a licensed version because it is rather unclear whether Swift PC Optimizer can fix any PC issues as it promises. If you noticed this rogue program performing scans and asking you to pay for its full version, double check the whole PC system with alternative scanner. That way you can make sure that all issues reported by this tool are invented or harmless.

The primary concern we have with system optimizers is that there is no proof that cleaning your outdated registry entries can help you fix your PC or make it faster. If anything, IT professionals noticed that some of these tools might actually damage system or program files. Consequently, some applications might start malfunctioning or not start at all, so there is no doubt that you should remove Swift PC Optimizer virus via Control panel and scan your system with Reimage Reimage Cleaner Intego immediately after noticing it on the system.

Additionally, registry entries only take up only a few kilobytes of space. Considering current capacity of modern HDD’s, their removal will not make a difference at all. Also, cleaning junk files can be done manually, and it only takes a few minutes.

Once after being installed on the system, Swift PC Optimizer flashes multiple error warnings, making some people believe that their PC is in great trouble. Thus, after being prompted to buy a full version, some inexperienced users might proceed with the offer. However, do not waste your time and money! Issues this rogue tool finds are not harmful to your PC, and you will only buy a useless piece of software you do not need.

Another good reason to proceed with Swift PC Optimizer removal is that your credit card details and other personal information[3] you enter might end up in crooks hands. From there, it can be used for illegal activities, such as money stealing or identity theft. 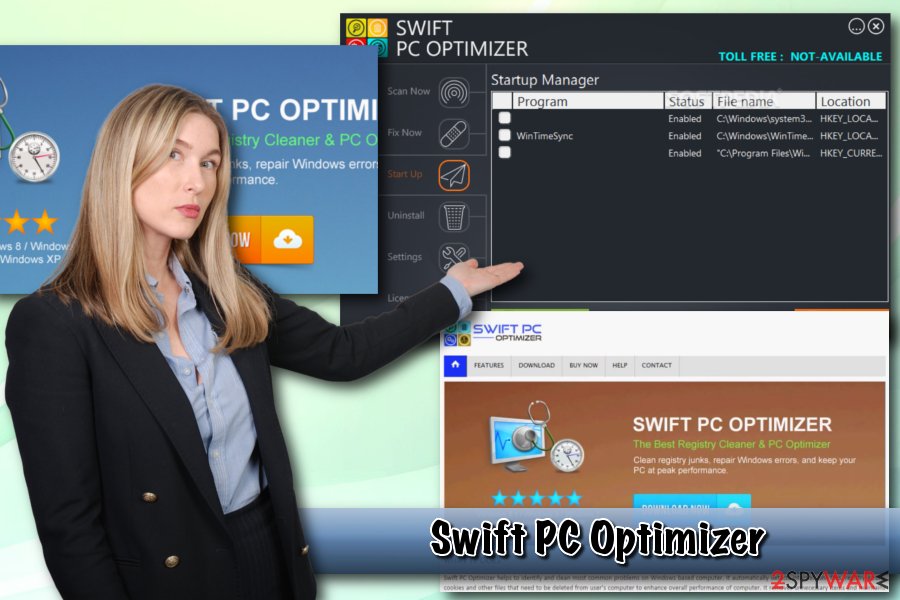 Swift PC Optimizer is a rogue optimizing tool that can allegedly help you with unwanted file removal. However, multiple users question its functionality and credibility in scan results.

Avoid unwanted applications by being attentive

Although the program can be download on the official website, it typically gets into users’ PCs with other free software. Therefore, it is vital to pay attention while installing new programs.

It does not matter whether you got tricked by fake developers’ promises, or the dubious app entered your PC with another program. It is essential to remove Swift PC Optimizer ASAP, as it can lead to multiple PC problems. You can eliminate the virus either manually or automatically.

We always urge users to pick automatic Swift PC Optimizer removal. This method is the best because it allows you effortlessly get rid of all questionable applications in one go and guarantees further protection from PUP or malware attacks.

Alternatively, you can also try to delete this app yourself. We prepared an illustrated guide below – make sure to check it out. However, we only advise advanced computer users proceeding with this process.

To uninstall Swift PC Optimizer from your Windows OS, follow these steps:

Do not forget to reset your Internet Explorer after discovering this PUP on your computer because it might hijack it as well. For that, use the following guide:

Get rid of Swift PC Optimizer from Microsoft Edge

Once these steps are finished, Swift PC Optimizer should be removed from your Microsoft Edge browser.

You can quickly scan the QR code with your mobile device and have Swift PC Optimizer manual removal instructions right in your pocket.