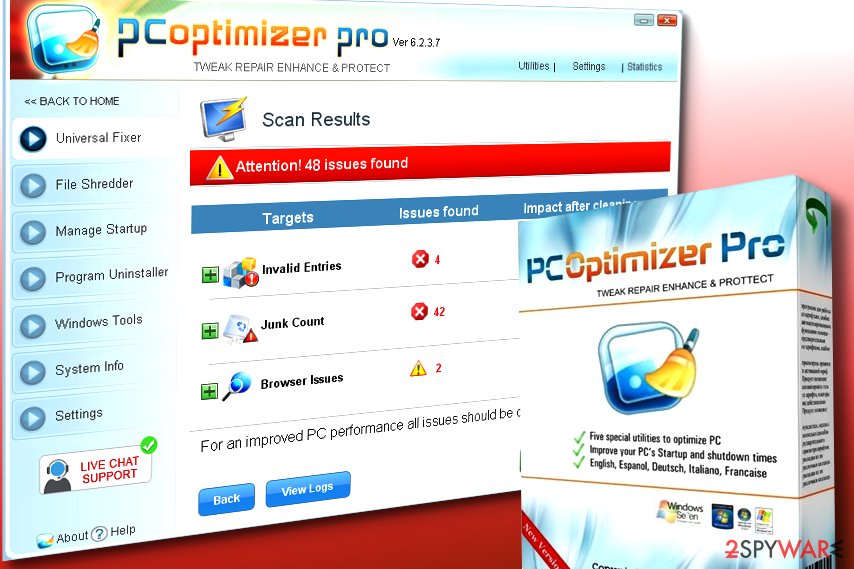 PC Optimizer Pro is a rogue system optimizer that is often classified as malware[1]. This virus claims to be a legitimate program, which is capable of increasing the security of the system and protecting the computer. Nevertheless, you should not take these words for granted because they are very misleading and may even lead you to the loss of your money.

PC Optimizer Pro is related to another program called Fake Antivirus. These products are FAKE and you should never buy them. Yes, that's what they seek. How do they do that? In most of the cases, they rely on misleading tactics that seek to scare PC users and then to make them purchase their full or licensed versions[2].

That's why this program starts scanning the system as soon as it gets installed on the system. Usually, it spreads via software bundling, so it is likely that you won't remember the moment it got installed. After hijacking the system, the PC Optimizer Pro virus states that some of the legal and essential Windows files are infected. In order to get the ability to remove them, you are supposed to purchase its licensed version.

However, that's what we don't recommend because it's a straight way to the money loss. All these alerts, warnings, and found infections are fake. Please do not purchase this program. Here are the examples of PC Optimizer Pro warnings:

If you are still not convinced to remove the described scareware program, we want to suggest reading PC Optimizer Pro reviews online. You will find dozens of forums discussing questionable functionalities of the software. Besides, you can even find some YouTube videos with recorded conversations with the rogue program's “support” team.

We believe that user reviews and these videos will convince you to uninstall PC Optimizer Pro – we are not the only ones who claim that the software is rogue and highly untrustworthy. According to dieviren.de[3], many German-speaking computer users got their computers compromised by this rogue system tool. 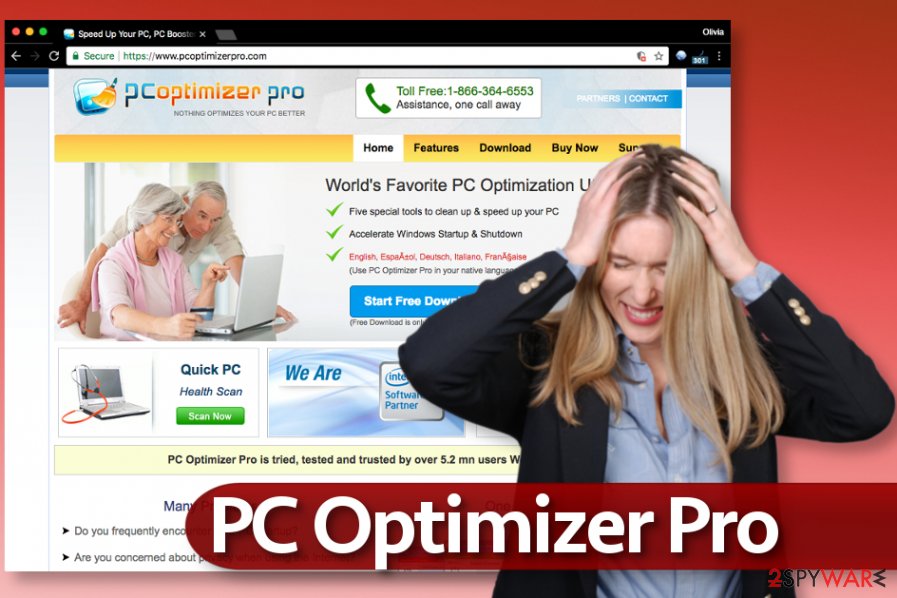 PC Optimizer Pro pretends to be a useful system optimization and maintenance tool while in reality it is a rogue software that urges victims to buy its licensed version.

This described rogue program is mostly distributed through infected websites and through the use of other dangerous computer programs. Below, you can find some tips that will help you to avoid installing it on your system.

Once this PC optimizer Pro enters the computer, it may try to block other applications on your computer and tell that they are infected. In addition, this program may try to change browser settings, connect itself to the internet, stay resident in the background and block access to legitimate anti-virus and anti-spyware programs.

Unfortunately, the PC Optimizer Pro removal process is quite a difficult task, so if you do not have enough knowledge of the computer system, it is better to remove this virus automatically.

Your questions about the suspicious optimizer answered

Question. I have just found a suspicious system optimizer on my computer and I know that I have never installed it. Could this be that PC Optimizer Pro is a virus that infiltrated my computer behind my back?

PC Optimizer Pro is a seriously deceptive application, which seeks to swindle people's money. It is known that it has been spread similarly to other fake optimizers, which means that there is no surprise that it showed up on your computer without downloading it.

Typically, such programs are spread using fake pop-up ads, software bundles, trojans, and other deceptive methods. If you have just discovered that optimizer on your computer, don't waste your time and scan your computer with updated anti-spyware because it can easily cause additional problems on your computer. We recommend using automatic removal of this shady optimization tool.

Question. As soon as I turn on my computer, the PC Optimizer Pro scanner starts checking my computer. Typically, it finds several hundreds of PC errors and other issues. However, I can't fix them without purchasing this program. Should I do that?

Question. Help me, I am infected with a virus! I googled “What is PC Optimizer Pro” and now I know that it's a dangerous program but I don't know how to delete it. Could you give me a detailed guide for the full removal of PCOptimizerPro?

Yes, you are infected with a seriously suspicious program, which should never be purchased. If you want to remove PC Optimizer Pro and each of its file, you should download a trustworthy anti-spyware like ReimageIntego. Make sure you update it before running a full system scan and you will remove each of malicious files that are related to the virus.

Question. I was browsing on the Internet when a huge warning message showed up. It offered me to check my computer for errors and I clicked on it. Now I am suffering from PC Optimizer Pro alerts offering me to purchase its license. The main problem is that I can't remove this malware because it fails to appear in the Programs list.

Unfortunately, but you have been tricked by hackers who are using such deceptive techniques for spreading their viruses. In this case, you should run a full system scan with updated anti-spyware and remove malicious files from it. If you want to be sure that PC Optimizer Pro is not hiding in your system's background, you should perform a system scan using a reputable security product.

Question. Could you help me to figure out whether PC Optimizer Pro is malicious or not? I was going to purchase its license for improving my computer's performance.

Please, do NOT pay for PC Optimizer Pro's license because it's a fake system optimization tool! No matter what is promised by its developers, they are promoting a useless program, which can even be used for stealing personal people's information. If you want to protect yourself, you should eliminate PCOptimizerPro from your computer. You can do that with the help of ReimageIntego.

Remove PC Optimizer Pro and have no doubts about it

If you think you are infected with the described system optimization “virus” but you do not know how to remove PC Optimizer Pro properly, we suggest you follow the instructions provided below. For a faster and easier removal, run a full system scan with ReimageIntego, SpyHunter 5Combo Cleaner or Malwarebytes.

These programs will help you to get rid of all malicious files that can be found on your computer. If you decided to go for a manual PC Optimizer Pro removal option, remember that this won't guarantee that all suspicious files and dangerous programs will leave your computer. However, you must follow the steps provided below to obliterate the shady software for good.

Normally, it is enough to uninstall the PCOptimizerPro in this way:

However, if this method doesn't help to eliminate fake pop-ups and annoying browser redirects, we strongly recommend you to follow the instructions provided in the rest of this guide. Uninstall every shady-looking program using these tips provided by our experts:

Change your homepage if it was altered:

Reset MS Edge if the above steps did not work:

If this solution failed to help you, you need to use an advanced Edge reset method. Note that you need to backup your data before proceeding.

In case Pc Optimizer Pro did not get removed after following the instructions above, reset Mozilla Firefox:

Get rid of Pc Optimizer Pro from Google Chrome

Get rid of every Chrome extension that slipped into your browser without your knowledge.

If the previous methods did not help you, reset Google Chrome to eliminate all the Pc Optimizer Pro-components:

Reset Safari if the above-mentioned steps did not help you:

After uninstalling this potentially unwanted program (PUP) and fixing each of your web browsers, we recommend you to scan your PC system with a reputable anti-spyware. This will help you to get rid of Pc Optimizer Pro registry traces and will also identify related parasites or possible malware infections on your computer. For that you can use our top-rated malware remover: ReimageIntego, SpyHunter 5Combo Cleaner or Malwarebytes.

You can quickly scan the QR code with your mobile device and have Pc Optimizer Pro manual removal instructions right in your pocket.