Bestlandcn.com is a website that shows fake notification about somebody allegedly spying on your iPhone

Bestlandcn.com is a pop-up scam message that users might encounter while browsing the internet on their iPhones or iPads, although the site can also be opened through any other operating system. The fake alert states that “Someone may be watching what you browse,” and that you need to download and install Hi VPN in order to change your IP address and encrypt your web traffic. Additionally, Bestlandcn.com scam also shows a fake IP address, implying that it is visible to everybody.

However, Bestlandcn.com is a regular scam that uses deceptive methods to scare users and make them download third-party software. While the application is not necessarily malicious (the link brings you to Apple App Store), its promotion methods are extremely dubious, hence we do not recommend using it. Besides, crooks might change the link and redirect users to malware-laden sites instead. Therefore, never download anything that is placed on the Bestlandcn.com website.

Even though you might encounter the Bestlandcn.com pop-up accidentally while browsing the internet on Safari, Google Chrome, Mozilla Firefox or another browser, the site might also be opened by potentially unwanted programs[1] installed on your iPhone. These adware apps usually get installed along with other software from third-party sites that are not approved by Apple. Therefore, you should be careful when dealing with non-official websites that host freeware and always opt for official download sources if possible.

Thus, if your iPhone, iPad, MacBook, or another device is affected by adware, Bestlandcn.com removal will require you to find the unwanted app and terminate it from your device. If you want a quick solution, scan your phone or computer with security software like Reimage Reimage Cleaner Intego – it should find all the PUAs and malware and eliminate them along with all the components.

Once you land on Bestlandcn.com site, you will see the following message:

Someone May Be Watching What You Browse
Your IP 104.236.233.182 could be exposed.
Someone may know your Apple iPhone

However, this is not the only version of Bestlandcn.com scam that users can encounter. In other cases, victims may see the notorious “Your system is infected with 3 viruses” alert, or similar. These messages often claim that the iPhone is infected with various viruses and, if no action is taken, banking information or other sensitive data will be stolen. Additionally, it can also be stated that the computer is damaged, or similar ridiculous claims. 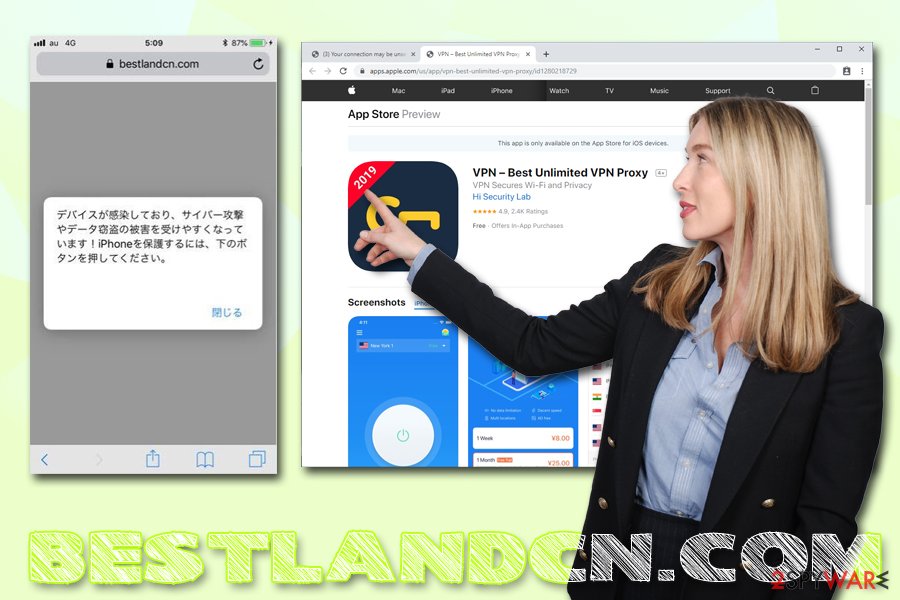 Bestlandcn.com is malicious site that mostly targets iPhone and iPad users from Japan, although people from other countries can encounter the scam in their native languages

As a general rule, Bestlandcn.com will often include a timer – it is a well-known social engineering tactic to create a sense of urgency. The timer simply prompts users to act quicker, and, while doing so, users often forget to calm down and check if the message was legitimate in the first place. Of course, people who encountered online scams before should not have trouble recognizing that Bestlandcn.com is a hoax.

It is not yet known who the developers of the site are, but it seems like the Bestlandcn.com virus mainly targets Japan[2] and a few other Asian countries. Nevertheless, the fake message checks for the IP address of the visitor and shows the message in the native language accordingly. Therefore, you might encounter the scam in any language due to targeted advertising techniques.[3]

You should remove Bestlandcn.com scam from your browser without clicking on anything and simply closing down the tab. After, check your device for any traces of adware and then reset all the installed browsers if you find anything suspicious that was installed without your permission.

Prefer App Store or other official sources when downloading and installing new apps on your macOS, iPhone or iPad

With so much to choose from, there is hardly a reason to go to third-party sites to download apps. Nevertheless, because many users are used to opting for third-party sites since years prior from when the official stores opened, old habits die hard. In other cases, users simply lack the knowledge and are not aware of the dangers that lurk outside the official sources. 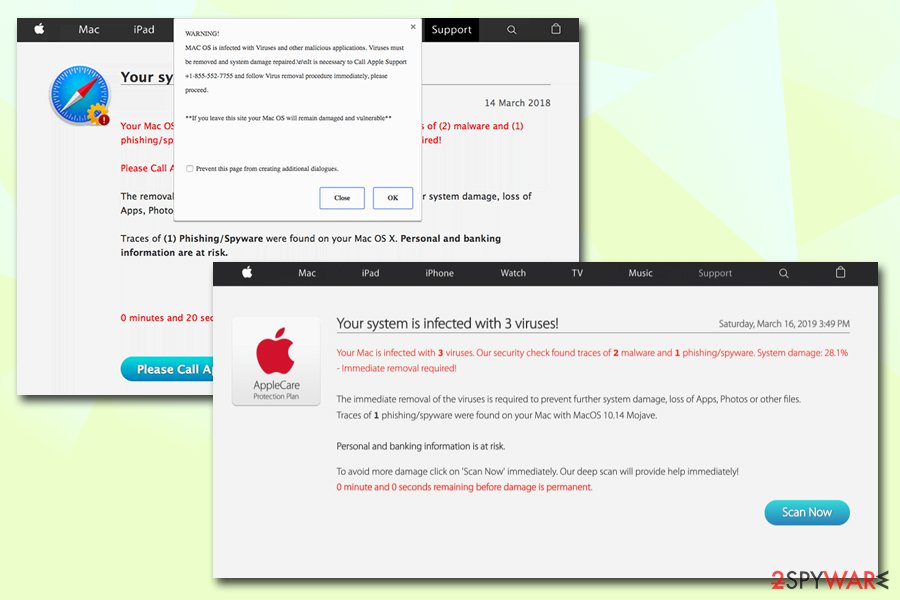 Another version of Bestlandcn.com scam presents users with the "Your system is infected with 3 viruses" fake alert

Of course, asking to never download apps from third-party sites is unreasonable, although you should be aware of several things. First of all, all freeware hosting sites are bundling software – this is when several apps are included in a single installation package. While users should be able to decline those apps (otherwise it would be illegal), most of software bundling techniques allow developers to slip in unwanted programs by using deception.

Thus, you should never rush the installation process and always carefully read all the presented information, check if the vital documents (Privacy Policy, for example) are present, remove all the ticks from pre-ticked boxes, decline all the deals or offers and always opt for Advanced or Custom installation settings.

Do not associate with Bestlandcn.com site and check your device fro adware

As we previously mentioned, Bestlandcn.com pop-up appearance on your Safari or another browser does not mean that you are infected with anything – you might have simply stumbled upon the site by accident. As long as you do not press any buttons or download anything, you should be just fine. Nevertheless, if you are experiencing frequent browser redirects, Bestlandcn.com removal will require some additional actions from you.

First of all, you should go to the installed app list and check if you recognize every installed application. If not, then hurry up and uninstall it. Even so, if your browser continues the redirects and shows you plenty of ads, you should employ anti-virus software and run a full system scan. To fully remove Bestlandcn.com infection, you should also reset each of the installed browsers, as explained below.

To remove Bestlandcn.com from your browsers, you need to eliminate adware app that is lurking on your device:

Once these steps are finished, Bestlandcn.com should be removed from your Microsoft Edge browser.

Get rid of Bestlandcn.com from Safari

Safari is one of the most attacked browsers, as it is the default browser used by Mac users. Reset it as explained below:

Your opinion regarding Bestlandcn.com Cancel reply

You can quickly scan the QR code with your mobile device and have Bestlandcn.com manual removal instructions right in your pocket.