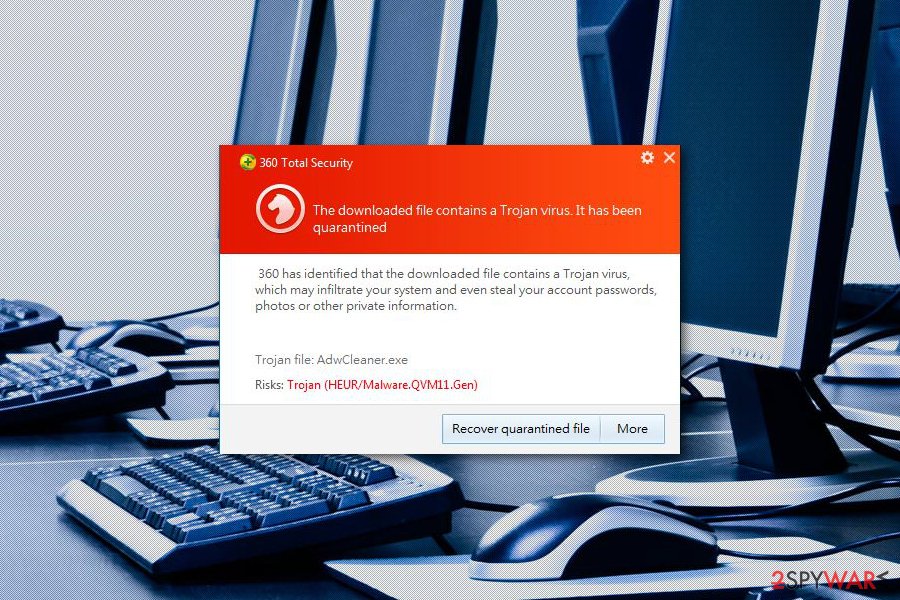 360 Total Security is a suspicious antivirus program created by the Chinese company called Qihu 360 Software Co Ltd. This program does not only offers poor protection from cyber threats but might get into the system unnoticed and aggressively urge to obtain the license key too.

So-called 360 Total Security virus is identified as a potentially unwanted program (PUP),[1] and has been actively distributed for a couple of years. Among the most affected users are located in the United States, India,[2] and Egypt. At the moment of writing, it's compatible with Windows and Mac operating systems. 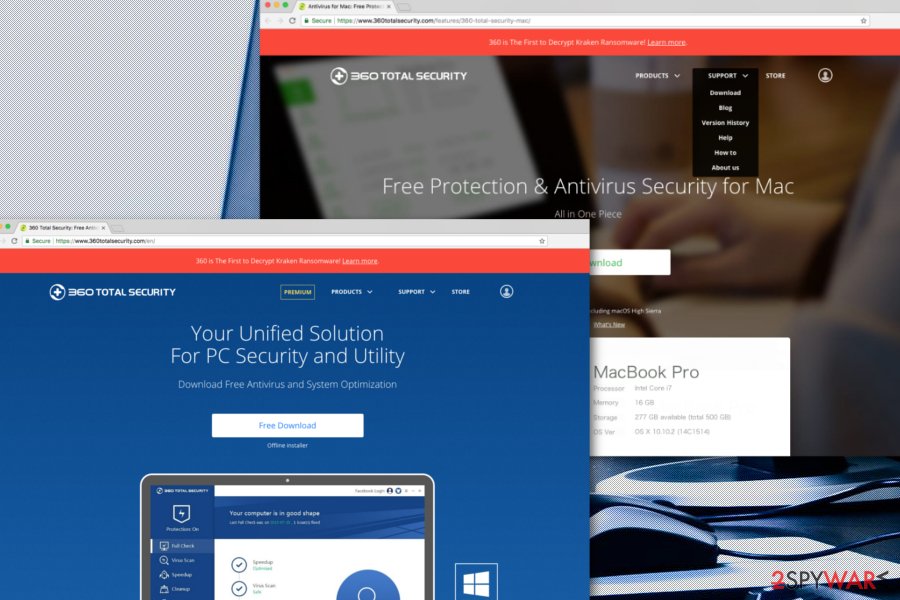 From the first glimpse, 360 Total Security may seem as a genuine anti-spyware.[3] It claims to be able to detect viruses, Trojans, and other emerging threats. According to the test results, the program does not detect major cyber threats and might provide fake system scan results.

Hence, 360 Total Security might inform about non-existent cyber threats on your computer. This sneaky technique is used to convince you to buy a license key of this questionable program. However, even the paid version of the program does not help to clean computer.

360 Total Security program has an official download website. However, it often sneaks into the system bundled with various free programs. What is worse, it does not arrive on the system alone. It might also bring Bitdefender and Avira engines or other PUPs. 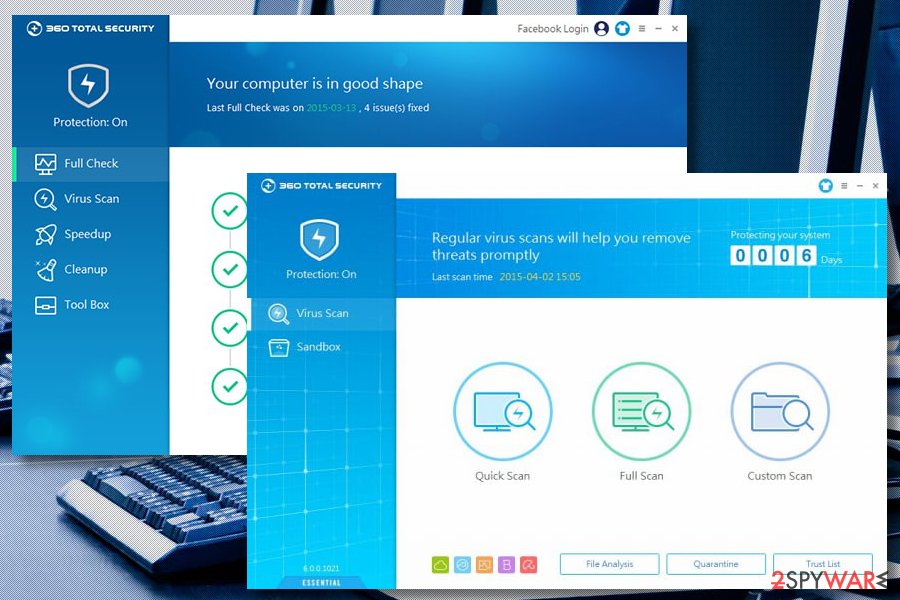 If 360 Total Security manages to infiltrate a computer, it adds a scheduled task to Windows Task Scheduler and launches at certain scheduled times. Besides, it connects to the Internet and adds a Windows Firewall[4] so that a genuine anti-spyware would not block it.

In addition to that, it installs a shortcut on the Internet and continuously runs the executable qhsafemain.exe in Task Manager. It seems that it is responsible for continuously displaying misleading 360 Total Security alerts.

Of course, you can stop these annoying activities. First of all, you have to uninstall 360 Total Security from Windows. However, we have told that it might bring other unwanted apps to the system, so you should find and get rid of all these entries. 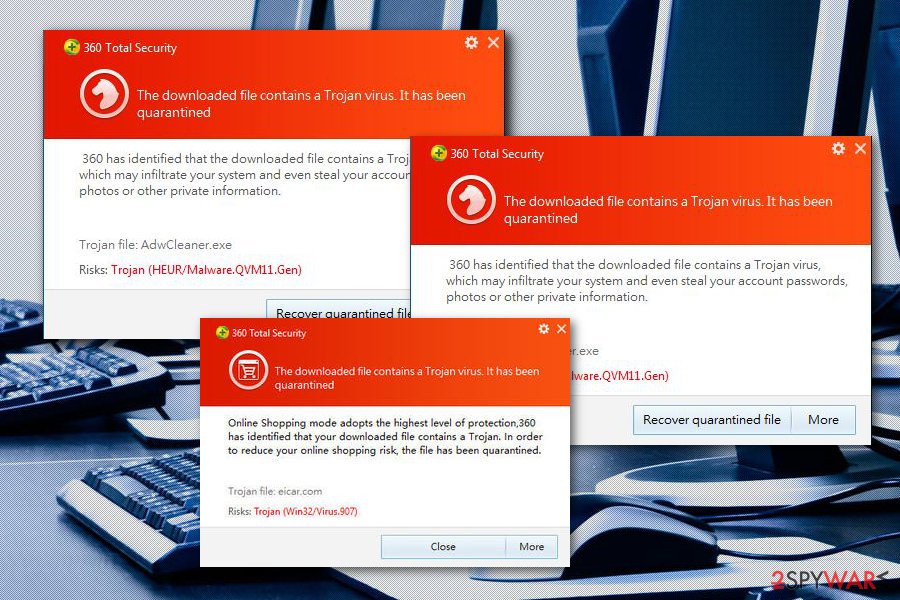 If you want to remove 360 Total Security together with its related components manually, you can follow our prepared guide at the end of this article. Keep in mind that attentiveness is needed. Otherwise, you might overlook some of the PUP-related components.

However, if you have problems with 360 Total Security removal or want to speed up the procedure, you should opt for automatic elimination method. You have to obtain a professional anti-malware software, such as Reimage Reimage Cleaner Intego, and run a full system scan. 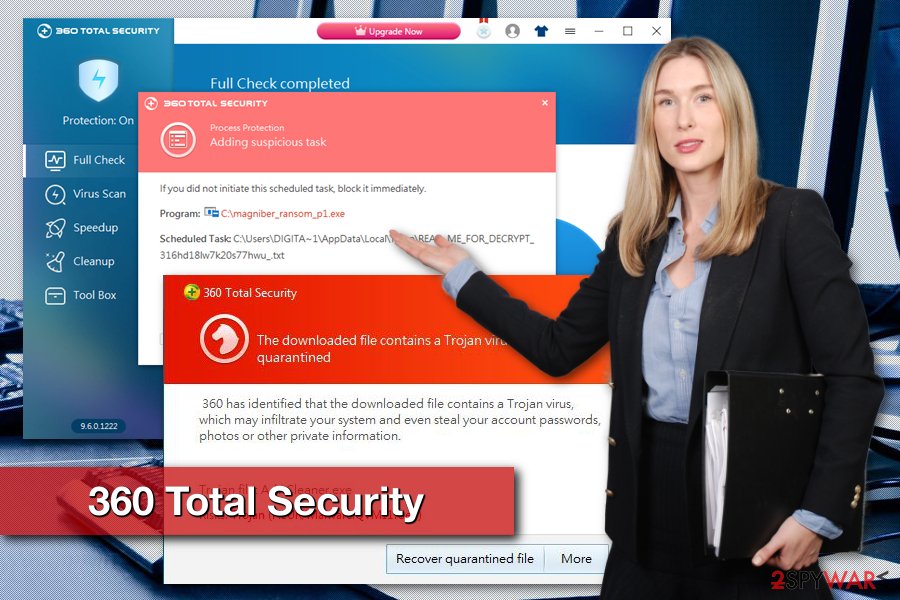 360 Total Security alerts might annoy you after secret installation of a questionable security software.

Advertising and distribution methods of the rough antivirus

Despite the fact that this suspicious security tool has an official download website; this tool might sneak into the system using other techniques. Authors of the program might use the following methods to promote and install a program on as many computers as possible:

Users are most likely to experience 360 Total Security hijack when they download free programs carelessly. If you rely on Standard/Recommended installation settings, you should ditch this habit right now! It’s the main way how PUPs enter the machine.

These settings do not openly disclose what additional apps might be included in the same package as a free program. Hence, all of the entries get into the system silently without asking user’s permission. Fortunately, you can switch to Advanced/Custom setup and avoid this unpleasant situation.

Additionally, it is recommended to stay away from security alerts popping up on the screen while browsing the web or trying free online scanners to check if your device is not infected. Such ads are typically malicious.

We have briefly mentioned two possible ways to remove 360 Total Security from Windows OS. If you are willing to get rid of the program and its related components manually, follow these steps:

Additionally, you should check your web browsers from unknown extensions or search engines. This tool is known for installing Bitdefender and Avira engines. We highly suggest terminating these tools because they might have features of the browser hijackers. You can find more information on how to fix your browsers below. Additionally, you can opt for automatic 360 Total Security removal.

Follow these steps to uninstall 360 Total Security and other questionable programs:

Get rid of 360 Total Security virus from Microsoft Edge

Once these steps are finished, 360 Total Security should be removed from your Microsoft Edge browser.

Reset Google Chrome to get rid of suspicious search engines that may have been installed together with a primary program:

You can quickly scan the QR code with your mobile device and have 360 Total Security virus manual removal instructions right in your pocket.