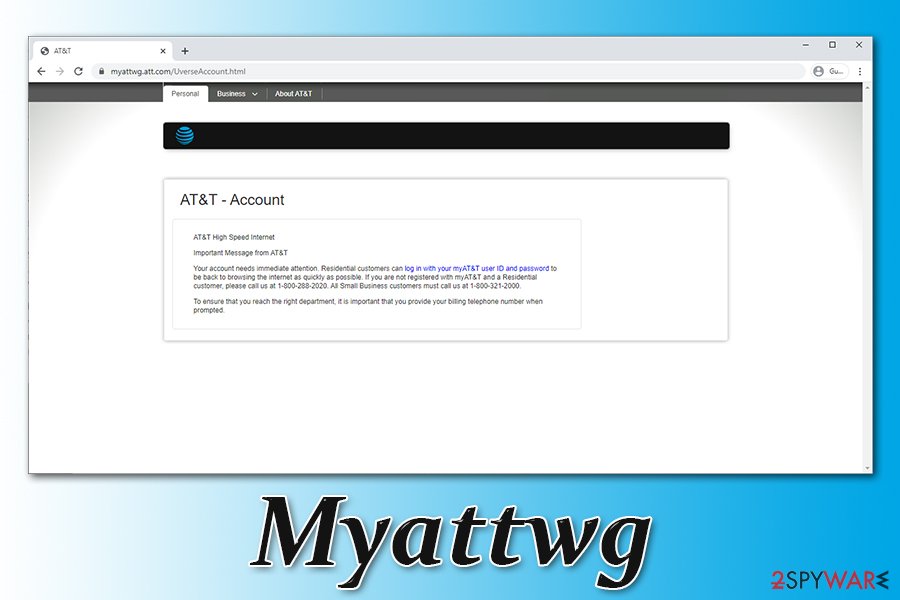 Myattwg is a redirect issue that many users reported for several years now. Apparently, as soon as users try to access even the most popular websites, such as Gmail, eBay, YouTube, they are simply being redirected to a https://myattwg.att.com/UverseAccount.html website instead. This behavior does not change on all web browsers, including Google Chrome, Mozilla Firefox, MS Edge, Safari, or others. As a result of Myattwg redirects, users are unable to use the internet as they would normally would, which causes a lot of frustration to many.

Naturally, some came to the conclusion that Myattwg is related to a virus, as browser infections often lead users to unknown websites filled with pop-up ads and other commercial content. However, myattwg.att.com website is legitimate, and it belongs to AT&T – an American telecommunications giant used by millions to ensure internet connections at home and work. Thus, users are baffled why this activity occurs, and what are they supposed to do to remove Myattwg from their browsers once and for all.

Myattwg redirect reports are scattered across multiple tech forums and support boards. While some claim that they can access a limited number of websites, such as the Apple support page,[1] others are unable to use the internet regularly at all, as they constantly land on myattwg.att.com/UverseAccount.html instead. Also, the issue is prevalent on both Mac and Windows systems.

There were several speculations that the Myattwg site is a scam, as it provides several contact numbers, and also uses text that is typical to online fraud schemes:

To ensure that you reach the right department, it is important that you provide your billing telephone number when prompted.

The fact that users get concerned and do not call the provided number is very important, as cybercriminals are often impersonating legitimate messages and embedding malicious links in similar messages inside a spam email or a specially crafted scam site.

Due to Myattwg redirects, users tried to fix the issue in various ways, such as setting their DNS settings to Google's, resetting web browsers, scanning computers with anti-malware software, resetting router/modem but to no avail.

However, Myattwg is not a scam and is an attempt from AT&T to limit the bandwidth to users who did not pay the bill on time. Indeed, the attempt to inform users about the overdue payment is very poorly executed – it does not explain so in the message that is delivered via the browsers, confusing customers even more. 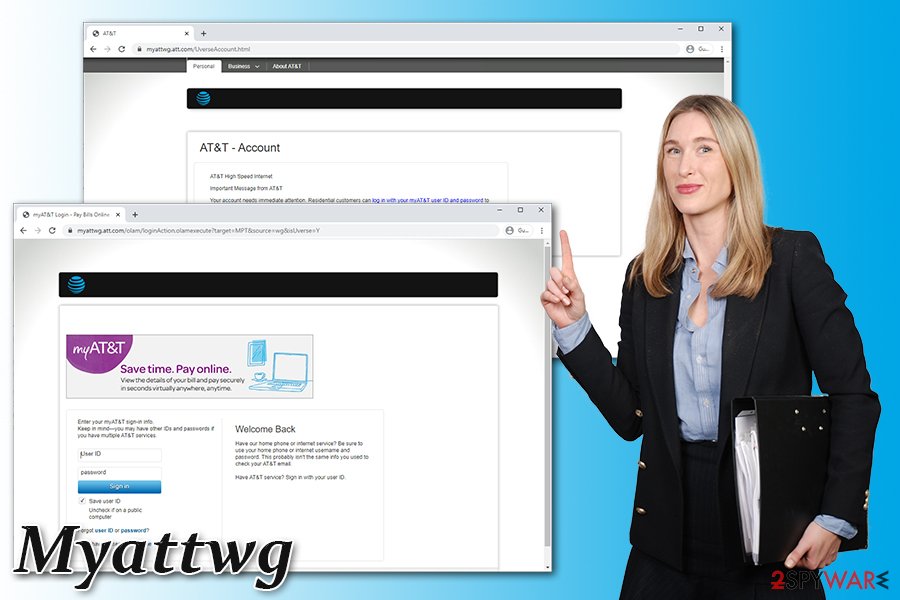 Thus, if you experience redirects to the site, you should ensure that your internet is paid for. If the latter is true and you still are unable to access the internet normally while being redirected to myattwg.att.com, you should contact AT&T directly and explain the situation. Also, you could try solutions for Myattwg removal we provide below.

Nonetheless, if you experience redirects to other suspicious/malicious websites, and you also noticed an increased amount of ads along with the Myattwg issue, you should still be concerned about the web browser or computer infections.

Thus, while Myattwg is not a virus and the site itself is not malicious, you should still perform some mandatory checks just in case. As a first resort, you should scan your machine with anti-malware software such as SpyHunter 5Combo Cleaner or Malwarebytes, and, in case something is found by the security software, you can also use Reimage Reimage Cleaner Intego to fix virus damage to your computer.

Ways to avoid unwanted software on your computer

Potentially unwanted programs can often cause browser redirects to suspicious, ad-filled, scam, and similar websites. Generally, these apps are not considered a major security risk, but nonetheless should be looked into and promptly terminated, as some adware turned out to be more dangerous than anticipated (for example, the seemingly innocent pre-installed app Superfish on Lenovo computers turned out to be intercepting HTTPS connections and rendering users vulnerable to cyberattacks).

Therefore, even a potentially unwanted program that seems more like a nuisance can seriously compromise one's security and also be a privacy risk due to information tracking practices. Here are some tips from experts[2] that could help you avoid suspicious apps like adware:

As previously mentioned, Myattwg redirect is only applicable to AT&T users, and the reason for it is an unpaid bill. If you have already paid the bill but are still experiencing restrictions and cannot access any (or some) websites, you should reset your modem/router by pressing the reset button (it might be located at the back). However, this might not yet conclude Myattwg removal.

To remove Myattwg redirects once and for all, you should also clear your browser caches and cookies. To do that, follow these steps: 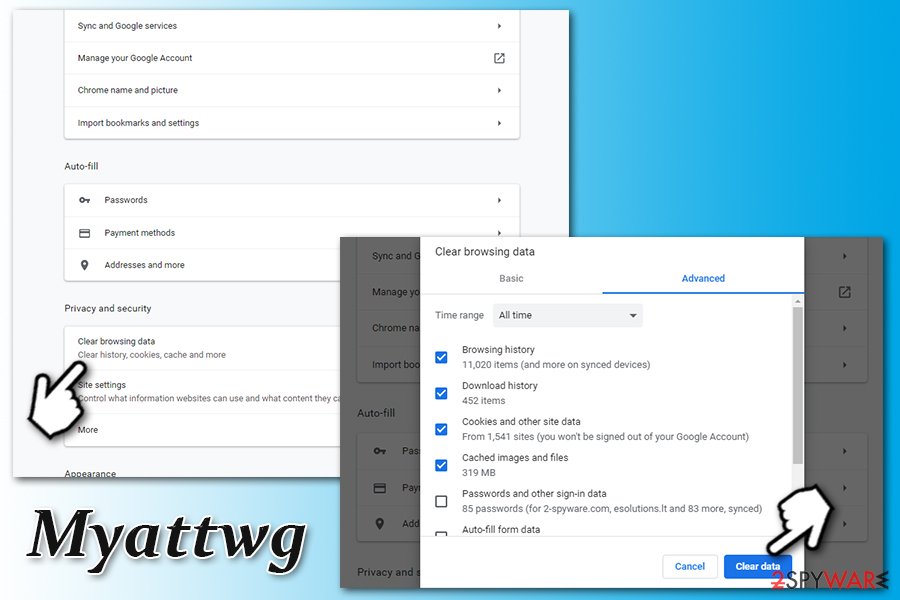 If you have already paid the bill and are still experiencing Myattwg redirects, you should remove the browser cache and cookies

If these steps did not help you resolve Myattwg redirect issues, you should contact AT&T directly.

Your opinion regarding Myattwg Cancel reply

You can quickly scan the QR code with your mobile device and have Myattwg manual removal instructions right in your pocket.