Nmon.exe virus is the file associated with Windows software that can be used as a part of a worm or trojan payload 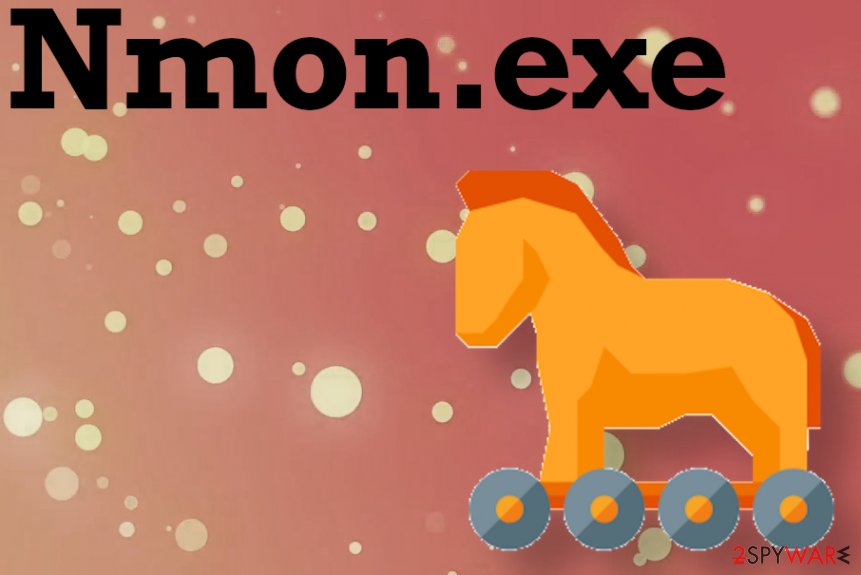 Nmon.exe – the executable file that is identified as an undesirable program due to shady processes running on the system. This file is a part of the application that can be harmful or even malicious. The threat may run on the machine and sneakily alter settings, disable or add features, files, programs. All these functions create persistence and significantly lessens options for the removal and system repair. This file can be a serious trojan related to other malware and distribute the payload of a serious threat, but it also can be considered safe and related to a program that gets corrupted or somewhat affected without your knowledge.

Nmon.exe is linked with OnMark 2000 Survey. When this file is really associated with the program it should be found in C:\Program Files\Viasoft\OnMark 2000 Survey\NMON.EXE. This location should be the best indication that file is related to the program and not malicious or potentially dangerous. If it is found in any other place or cannot be located easily, you should consider this program at least undesirable and look out for any malware traces, virus damage, and so on.

Nmon.exe is the file that normally is designed to run commands, launch processes, trigger programs. It is not a Windows OS particle, so the file can be terminated if causing trouble. When you notice anything suspicious in regards to these files, suspicious programs, or processes, you should first find the path of the file or program and determine if the piece of malicious or safe and useful.

Nmon.exe virus can be the part of malware payload because some researchers identified this executable as a piece of data that Rbot.hz worm adds on the system once the machine is affected. This W32/Rbot-HZ threat can act as a remote access tool[2] or open backdoors for trojans, allow unauthorized remote access to the PC.

Since the file is in a common format, Nmon.exe virus can easily end up triggering background services, malware programs and still remain silent. Malicious intruders that fall in these malware, worm, or trojan categories are known for being silent and affecting poorly secured networks. So weak passwords can result in a backdoor trojan, info-stealing malware infiltrations.

If your device is infected and your machine is controlled by a remote attacker, your computer is not working properly anymore. You need to remove Nmon.exe, or a virus that triggers all the changes and damage on the computer. If you do not achieve that by uninstalling the associated program, you can run the system repair tool like ReimageIntego, or an optimizer. Such programs can help you find, indicate, and if anything that gets affected by the infection.

Determine if the file is a malicious Nmon.exe virus or not

To determine if the Nmon.exe virus is malicious or not, you need a proper system scan using anti-malware tools. If the full check on the computer states about pice of malware, you should run the elimination and take care of the threat. That should happen automatically when you use proper antivirus detection engine-based applications.

Nmon.exe removal can get difficult if the program is installing more files or programs on your machine. The persistence can go significantly high, and once the malware triggers all the shady processes, your device starts running slow. Speed issues also trigger freezes and system crashes that can lead to more severe issues than the background process.

Nmon.exe virus can appear in the Task Manager as a process running in the background. You should have some questions about the persistence and purpose of the intruder when the file appears out of nowhere and is not related to anything explainable. You should determine the path via Task Manager to see the location of the file. If you find a suspicious directory associated, you should investigate further.

You can remove Nmon.exe virus if the anti-malware program that you run on the system shows the file on a list of malware detected. This is the best indication that you need to get rid of the threat and clean the machine further. Also, remember the importance of professional programs and file repair requirements.

Choose reliable anti-malware tools, clean the machine, and try to find virus damage or affected, corrupted files, so you can repair them and get back to the normal working devices. Such stealthy malware like Nmon.exe virus can affect various parts of the computer without your knowledge, as experts[3] always note. So try to clean the system as soon as possible. 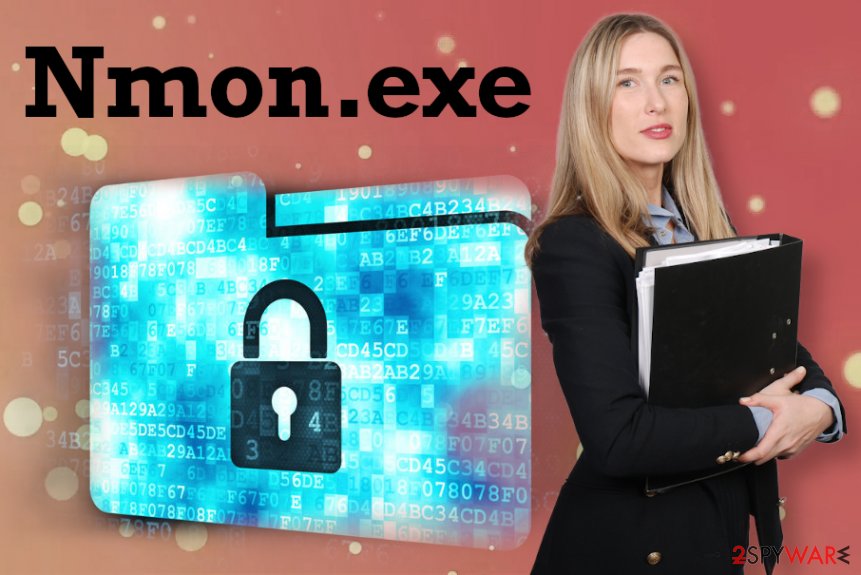 Nmon.exe - a piece of system file that should be properly checked with antivirus.

Trojans, ransomware, worms, and other malware that stealthily injects its scripts on the system can spread easily when users don't pay attention to the content that gets clicked on or is downloaded. It is unnoticed when the malicious file is downloaded without your consent or knowledge.

You can trigger the drop of the threat when you download pirated software, use torrent services, or surf on deceptive pages, misleading domains. Sometimes hacked or malicious sites can have many layers and launch malware installations after a few clicks on the content.

Spam email campaigns also have many issues since users tend to overlook details and red flags. Notifications with financial information and claims about orders, receipts, invoices often can include files with malicious purposes, and once the document is opened or downloaded executable, DLL or different format triggers the drop of a virus payload.

Get rid of any traces and associated programs by removing Nmon.exe virus

You can remove Nmon.exe from the machine if it causes issues, triggers unwanted processes, and affects the performance of the device for you. You need to determine the purpose, source, and the level of danger before though. You can't un the security tool or a anti-malware program, so the malware is detected.

Once you find the Nmon.exe virus on the list of potentially malicious programs, you can run the same security or antivirus tool and delete all the traces. SpyHunter 5Combo Cleaner or Malwarebytes should work perfectly for you because these programs are based on AV detection engines.

Also, do not forget about corrupted file and program issues. After the Nmon.exe removal procedure, run ReimageIntego and check for corrupted, damaged, or differently affected files, system functions to repair. Once that is fully done, you can use the PC normally again.

You may benefit from the reboot in Safe Mode with Networking when Nmon.exe virus runs its malicious processes

System Restore can act as a virus removal solution because it recovers the machine in a previous state when Nmon.exe was not present

Finally, you should always think about the protection of crypto-ransomwares. In order to protect your computer from Nmon.exe and other ransomwares, use a reputable anti-spyware, such as ReimageIntego, SpyHunter 5Combo Cleaner or Malwarebytes

Your opinion regarding Nmon.exe Cancel reply

You can quickly scan the QR code with your mobile device and have Nmon.exe manual removal instructions right in your pocket.