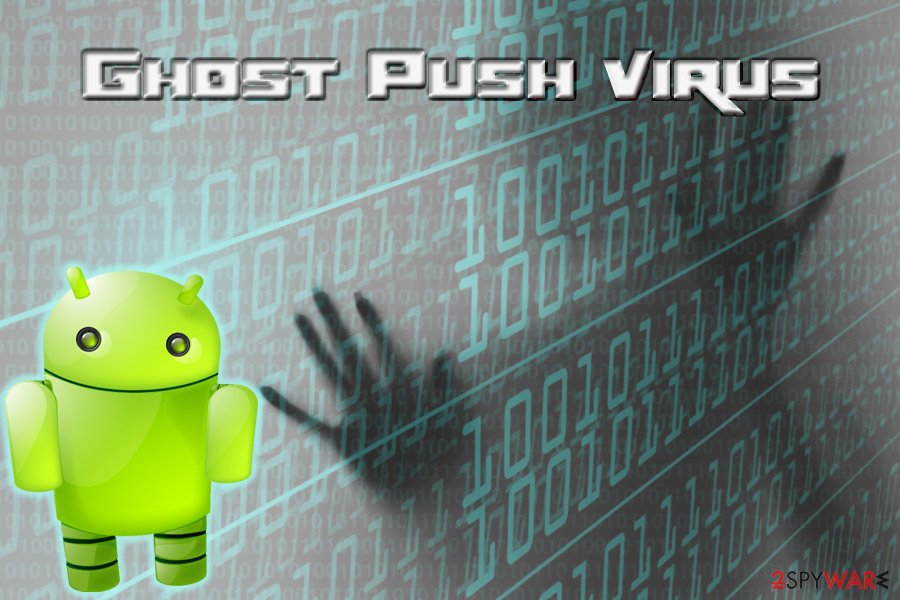 Ghost Push virus is malware designed to infiltrate Android OS tablets and phones exclusively. It was first spotted in September 2015 and has been improved several times since to bypass new security measures implemented by malware researchers. As soon as the malicious payload is executed, Ghost Push gains root access of the device, downloads and installs malicious apps that profit hackers via advertisement and drains phone's battery. Additionally, bad actors can use the malware as a perfect spying tool – all the personal data entered when the malware is present can be stolen. Unfortunately, even the factory reset cannot remove Ghost Push virus, so the best solution would be not to get infected in the first place.

At its peak, Ghost Push virus infected over 600,000 devices daily, with 50% of infections stemming from India, as well as Indonesia and Philippines, taking the second and third places.[1] While malware mainly targets Asian countries, Europeans and Americans should also be careful.

Nevertheless, the most important thing is to download and install the latest security updates. Those who are using Android Nougat (V. 7), should not lose their sleep at night fearing the dreadful Ghost Push virus. Unfortunately, only 30% of users are using Nougat[2] and Oreo, leaving most of the devices vulnerable.

The goal of Ghost Push virus is to download and install other malicious apps from third-party sources. Hackers appear to be responsible for more than 658 malevolent applications creation, which corresponds with each other. Some people claimed that malware could connect to WiFi automatically or prevent connections entirely. All in all, Ghost Push virus is there to cause havoc, and its there to stay.

The worst part is that Ghost Push virus removal is particularly difficult, as the malware loses root access after it infects the device. Meaning, that even factory rest will not solve the problem. The only way would be to reflash the firmware loaded into the machine.

Experts[3] strongly advise using the comprehensive anti-malware software. To clean the junk that the malware can install and fix the damage done by viruses we suggest using Reimage Reimage Cleaner Intego or SpyHunter 5Combo Cleaner. 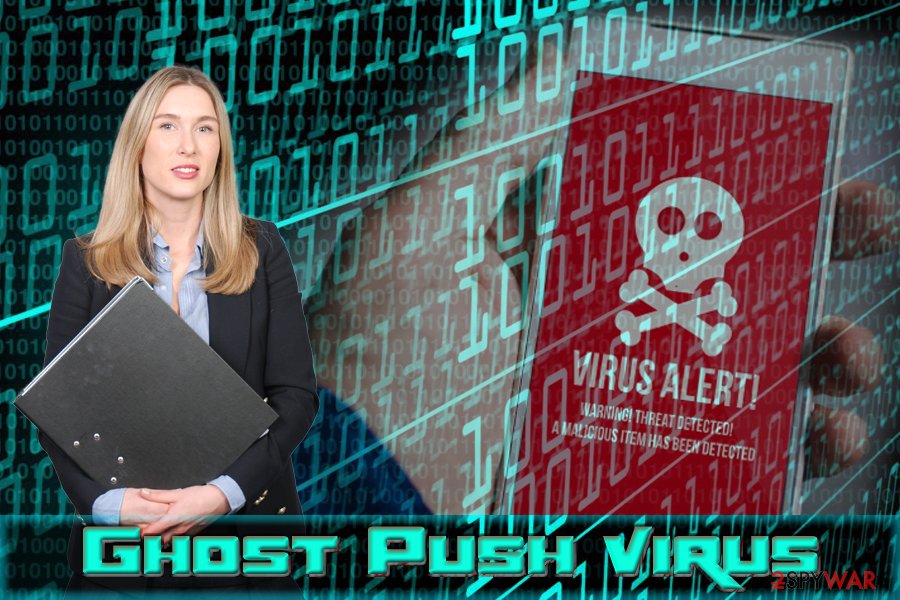 Users should not only care about their PC security, but also remote devices like phones and tablets. Gone are the days when the only thing users could do on their phones is calling, texting and playing Snake. Modern tablet and phone devices are sophisticated and should be treated like any PC. Therefore, software updates and security software should not be ignored, as these measures can help to protect devices from Android malware.

The number one source for virus installation of Android is the insecure third-party websites. Legitimate stores, like Google Play, have over 3.3 million apps to choose from, so there is no need to look somewhere else unless it is other reputable websites like Amazon. Therefore, users are strongly advised to stay away from third-party stores.

Additionally, clicking on pop-up ads on questionable websites is not a good idea either. Redirects can lead victims to scam sites, where they might download malware unknowingly, urged by social engineering skills of cybercriminals.

Ways to get rid of Ghost Push virus

As we already mentioned, the malware gains root access to your phone, and Ghost Push virus removal becomes almost impossible. Nevertheless, you can try your luck by entering Safe mode and trying to regain admin rights, as well as scanning your device with reputable anti-virus software.

We can not guarantee you will be able to remove Ghost Push virus from your device, but please try doing it using different security software. If nothing works, reflashing the firmware is the only choice.

You can quickly scan the QR code with your mobile device and have Ghost Push virus manual removal instructions right in your pocket.