Fixit Trojan – a dangerous malware that can steal your personal data 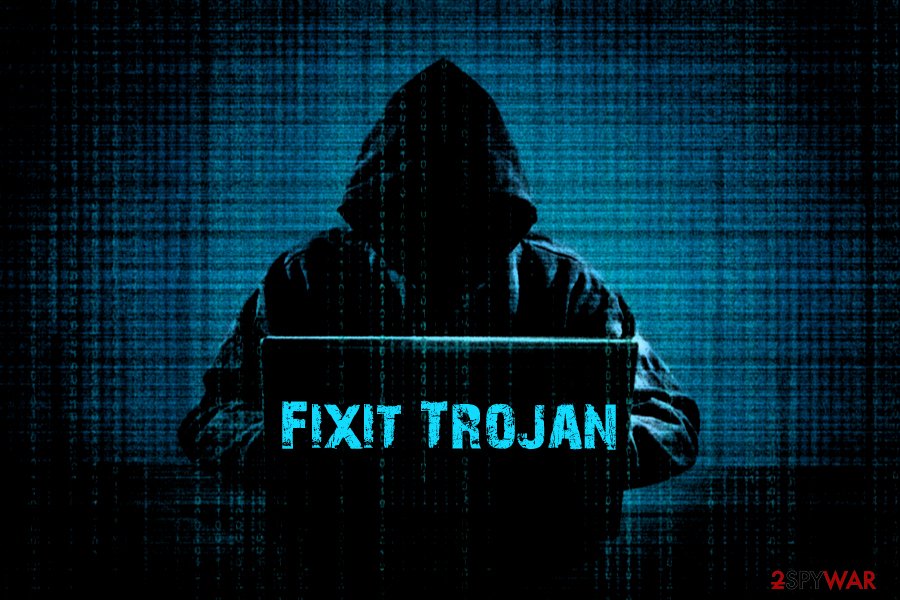 Fixit is a dangerous Trojan horse[1] that can appear on your computer out of nowhere. Typically, these sneaky cyber threats enter computers via phishing emails, cleverly engineered by cybercriminals. Systems that are not protected by security software are especially vulnerable and have a higher chance of infection. The malware is capable of modifying system parameters, reading and transferring personal information to hackers and may even engage in downloading and installing other viruses, such as ransomware.[2]

Trojans are well known to replicate, replace or duplicate existing executable files. Therefore, a legitimate process FixIt.exe, ran by legitimate software TODO by Accer, may be a part of the malicious file. Therefore, if you have the software installed, security experts[3] recommend to scan your machine with Reimage Reimage Cleaner Intego or Malwarebytes and remove Fixit virus if it is detected. You should be especially concerned if several processes are running in the Task Manager. If the

The primary purpose of hackers is to obtain access to your device. For that, they employ spam bots which distribute malicious payload via the malicious email attachments or hyperlinks. Once installed, Fixit trojan modifies specific system settings, such as Windows registry. This allows the virus to ensure it is booted with every system launch.

As soon as modifications are complete, Fixit malware begins its malicious activity. Unfortunately, Trojans rarely show any signs or symptoms, resulting in a prolonged operation of the virus on the device. This can lead to severe consequences, such as sensitive data disclose to bad actors, as well as hardware wear and tear or even malfunction.

In some cases, Fixit Trojan might display the following signs:

Additionally, malware could inject other threats, such as banking trojans, crypto-miners, keyloggers, and other dangerous viruses. Thus, we suggest you not delay Fixit Trojan removal. Don't forget that manual elimination will not be successful, and you need to use the security tool. 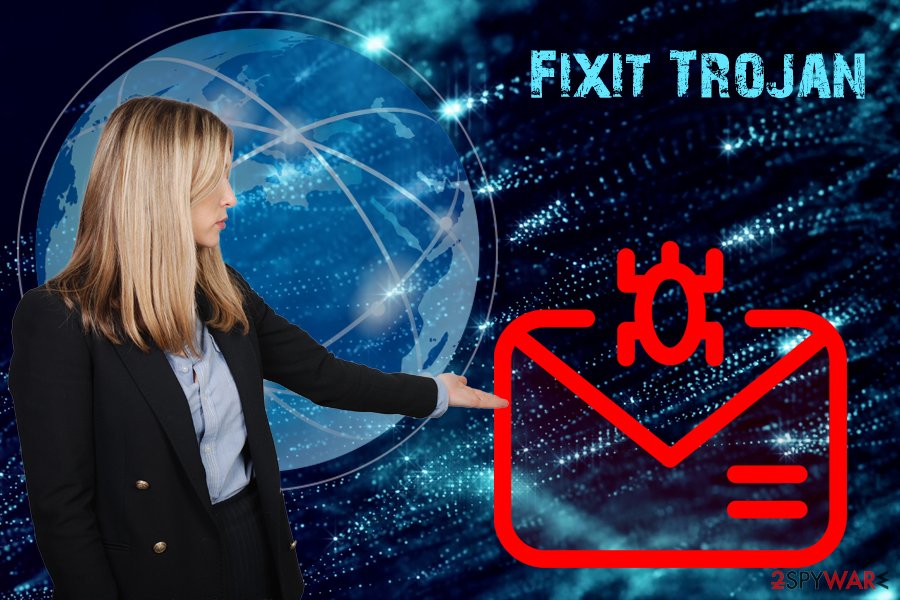 Avoid malware by being careful online

Malware is a sneaky piece of software, capable of making significant changes on your machine to serve a particular purpose to cybercriminals. Of course, the best practice would be never to get infected with viruses. However, in practice, it does happen to many people, especially those who least expect it. Although there are no 100% safe-proof methods, you can drastically decrease chances of infection by knowing how malware spreads.

The most prevalent trojan horses' distribution tactic is by using spam emails. These malicious messages contain attachments which carry the payload. In other cases, hackers might include links to malicious websites that automatically download and install malware. Therefore, you need to be wary when it comes to emails that come from questionable sources.

Make sure you never open emails that are suspicious, and always check the “From” address, as it is the easiest way to catch a phishing email. Additionally, email providers often flag suspicious messages as spam. Make sure you don't ignore those warnings.

Use security software to get rid of Fixit Trojan

Fixit removal should not be attempted without using Reimage Reimage Cleaner Intego, Malwarebytes, or another reliable anti-malware program. Trojans are well known for their ability to avoid detection by disabling security software. Thus, you should enter Safe Mode with Networking (as explained below) and perform full system scan from there.

Beware that you should not struggle to remove Fixit virus manually. The code of such malicious program is hugely complicated, and manual elimination should only be left for professional IT experts.

To eliminate Fixit Trojan from Windows, enter Safe Mode with Networking the following way (not that this step is not needed it security software works properly in normal mode):

Finally, you should always think about the protection of crypto-ransomwares. In order to protect your computer from Fixit Trojan and other ransomwares, use a reputable anti-spyware, such as Reimage Reimage Cleaner Intego, SpyHunter 5Combo Cleaner or Malwarebytes

You can quickly scan the QR code with your mobile device and have Fixit Trojan manual removal instructions right in your pocket.