Uspo.xyz is a potentially unwanted application that might lead to phishing, malware-laden or other dangerous sites 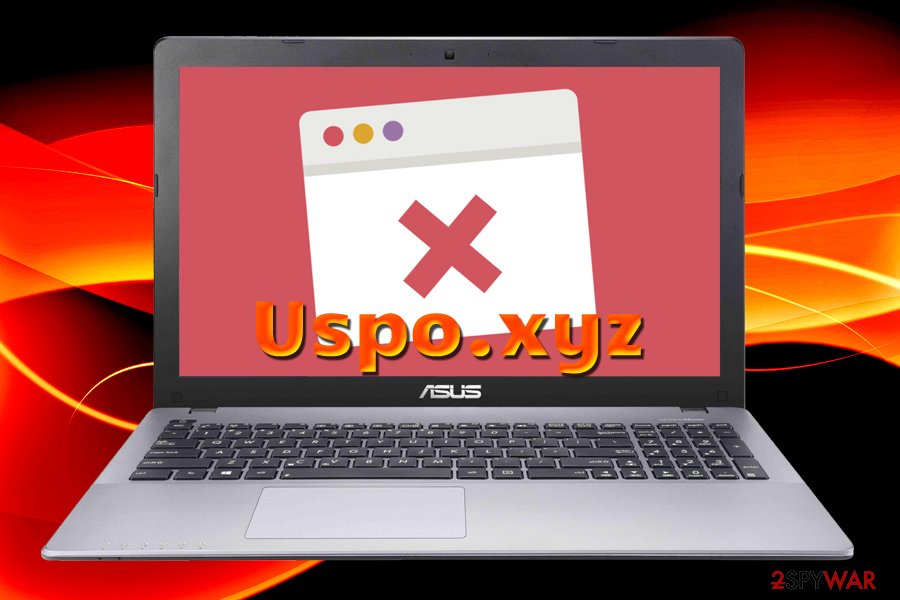 Uspo.xyz is an adware[1] application that can take over Google Chrome, Internet Explorer, Safari, Mozilla Firefox or another browser and start displaying intrusive advertisement, interfering with users' internet browsing activities. Potentially unwanted programs usually are installed together with freeware from third-party sites, so users rarely notice the entry point. Uspo.xyz might not only be a nuisance, but it can also pose a risk to online safety and computer security, as personal information compromise, as well as malware infection, can be a result of the PUP.

Generally, Uspo.xyz is not considered to be malware per se, as it does not impact the system operation directly. However, security researchers have been battling with what turned out to be extremely lucrative, yet potentially unsafe, campaign. Nevertheless, some forms of adware might be remarkably intrusive and be closely related to malware, for example – OSX/Shlayer.

While most potentially unwanted program infections will most likely not result in severe consequences, but some of them indeed might, primarily if not handled with care. The main danger lies in redirects that Uspo.xyz virus can bring users to, as well as clicks on suspicious banners, pop-ups, coupons, banners, and similar ads.

The behavior of the unwanted app can be incredibly intrusive and stop users from performing daily tasks on the web – yet another reason to remove Uspo.xyz. The easiest way to do so is by employing security software, although manual elimination is possible as well – check down below.

Finally, we would like to warn users about the collection of information. Modern browsers like Google Chrome use numerous security measures[2] to prevent scams, malware infections, and similar dangers. However, having adware program like Uspo.xyz installed on the device might compromise that security and lead to dangerous sites.

Note that, in case your system is not fully optimized (updated with latest security patches), redirects may lead you to sites filled with malicious JavaScript[1] that will download and install malware automatically without you doing anything. Once Uspo.xyz removal is complete, you should scan your computer with Reimage Reimage Cleaner Intego – it will ensure that the device is working without any problems. 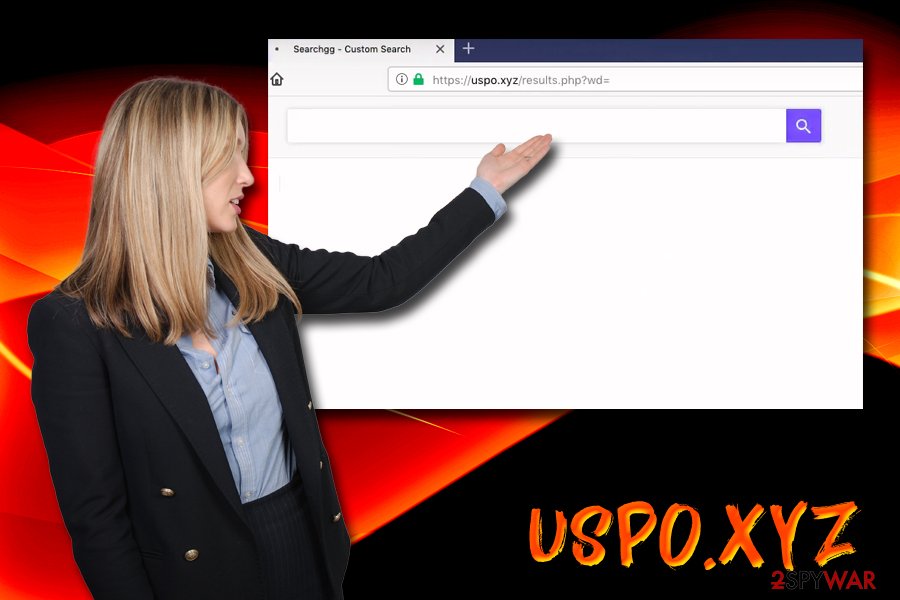 Uspo.xyz is a potentially unwanted program that is usually bundled with freeware and enters users' machines without them noticing

As we already mentioned, adware infection does not indicate immediate system compromise (in most cases at least). However, the real danger comes with redirects and links that potentially unwanted program provides, and its authors would never claim responsibility for it because, well – they don't have to. Quite often, adware is produced in a way that prevents revelation of developers – programs are not signed and have dubious names.

However, some application can be well-known and actually used by many. For example, uninstallers, media players, driver updates, registry cleaners and similar software can invoke the questionable behavior and it will be hard to tell where it's coming from – at least for a regular user. Therefore, security experts from virusler.info.tr[3] advise practice the following:

Get rid of Uspo.xyz intrusive behavior

To remove Uspo.xyz redirects and other unwanted activity, you should choose one of two methods: automatic or manual.

If you want to proceed with manual Uspo.xyz removal, you should download and install security software that analyzes, detects, and eliminates potentially unwanted programs (note that not all applications are specializing in doing so, but rather focus on malware instead).

Alternatively, you can also delete Uspo.xyz virus with the help of our manual instructions below. You will have to uninstall the adware application and then reset each of the installed browsers. Be aware that failure to follow the guide properly will result in the reinfection.

To stop Uspo.xyz redirects, notifications, pop-ups, and other intrusive actions on Windows, perform these steps:

If you want to remove Uspo.xyz infection from Mac, follow this guide:

Once these steps are finished, Uspo.xyz should be removed from your Microsoft Edge browser.

Get rid of Uspo.xyz from Mozilla Firefox (FF)

Make sure you reset Google Chrome to make sure all the browser changes done by the PUP are reversed:

Your opinion regarding Uspo.xyz Cancel reply

You can quickly scan the QR code with your mobile device and have Uspo.xyz manual removal instructions right in your pocket.