Backdoor.SDBot is the trojan that allows attackers to control the targeted computer by opening the backdoor 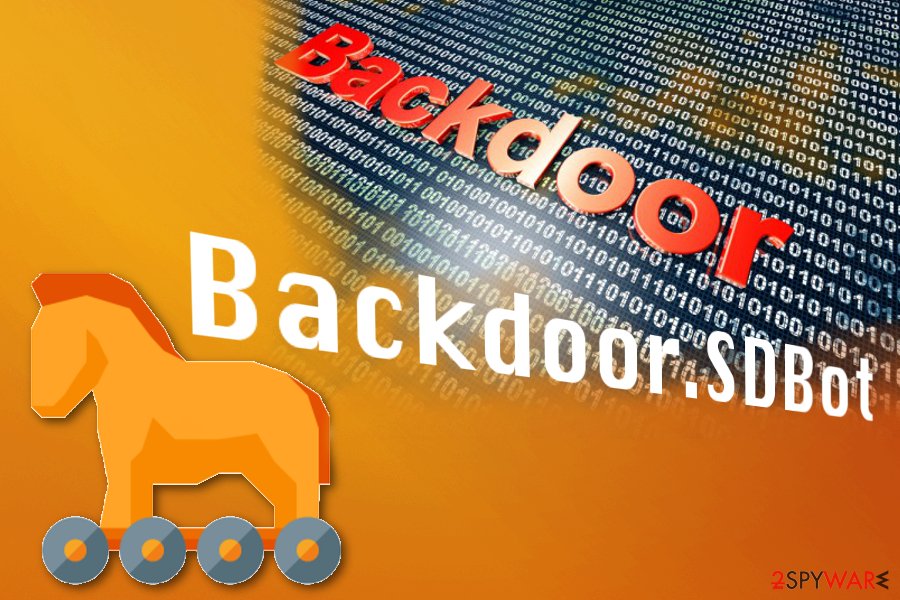 Backdoor.SDBot is the malware that belongs to a backdoor trojan family because of the particular virus functions. This virus connects to an internet server and receives commands from the developer, so malware actions on the system may vary from downloading and running files, monitoring activity, collecting information to manipulating processes and services directly on the machine or capturing Webcam shoots.[1]

This is a trojan that mostly targets Windows operating systems and attempts to gain access to the computer with administrative rights to make necessary changes. Backdoor.SDBot malware can delete the initial source program, so the detection and removal become even more difficult besides the silent infiltration. The damage can already be done in the system when you notice the questionable activity regarding the existence of the malware, so the thorough system cleaning is needed.

Backdoor.SDBot virus belongs to one of the most dangerous strains of malware – trojans. This threat disguised as a process in Task Manager and this way runs uninterrupted for a long time. Also, such malware can pose as a legitimate application and damage the computer without any permission or users' knowledge.

The most unique and dangerous feature of such infection is that Backdoor.SDBot trojan runs in the background long before you get to discover that a rogue program affects your machine. There are not many noticeable symptoms this threat cause on the infected PC, but a few indicators that virus runs on the machine can include:

Backdoor.SDBot exploits system vulnerabilities of the Windows devices and networks and spreads around by remotely accessing the targeted PC. Then, the malware uses commands to copy and run itself on the device. Once infiltrated, malware can terminate security functions, software, system features to keep being undetected. 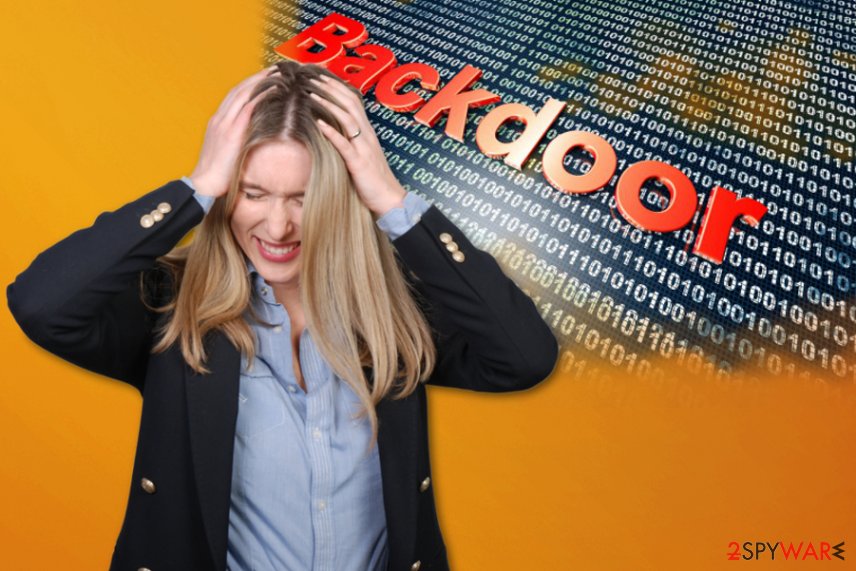 Backdoor.SDBot is the malware that opens backdoors for malicious actors so that other procedures can be launched on the affected PC.

Backdoor.SDBot can use the same vulnerabilities and open backdoors for other malware creators to spread infections further. This is why removing the trojan completely from the machine is difficult – the virus can run its processes freely when associated files remain on the computer. You need to delete all of those applications and files to terminate this trojan properly.

You can remove Backdoor.SDBot and associated files by scanning the system with anti-malware tools fully. Programs like this can detect and remove cyber threats found on the computer. A thorough check on the device allows seeing results and eliminating all indicated programs.

Choose tools for automatic Backdoor.SDBot removal wisely and from the official sources and providers. This way you can be sure that software cracks or rogue applications are not installing additional programs or even more severe malware. We offer Reimage Reimage Cleaner Intego for additional system check and cleaning that involves fixing the virus damage.

Besides all those noticeable changes, Backdoor.SDBot trojan adds files in the system folders and executes commands to change boot preferences and startup keys, registry entries. Associated files may include:

Trojans and similar malware like Backdoor.SDBot often is designed to infect the machine with the initial payload and then spread other threats on the affected device. Such threats may be ransomware or cryptojacking malware. These are the two most dangerous cyber threats. Experts[4] note how important it is to scan the affected machine thoroughly and remove all programs to avoid additional malware installation.

Since Backdoor.SDBot disables many security functions and even programs, you could benefit from rebooting the machine in Safe Mode before scanning with the AV tool. Also, Windows devices have a System Restore feature that helps when fighting malware.

Trojans and other malware get installed automatically when macros get triggered

Spam email campaigns involve various social engineering tactics and other deceptive techniques that spread infected files and hyperlinks, documents, automatic downloads. Once the suspicious email is received, you should delete it immediately and avoid any clicking on the contents.

When the document is downloaded and opened on the computer, malicious macros get triggered and launches malware script or even installs malware directly. This is the process that does not require your permission and you cannot see the initial downloading of the program.

However, these installations can be avoided if you pay close attention to such emails and other processes involving content form the internet. Delete suspicious emails you were not expecting to receive. Also, keeping antivirus tool and running a full system scan occasionally can improve the performance of your machine significantly and such tools can block malware before it enters the PC.

Backdoor.SDBot virus elimination should include anti-malware program and a full system scan

For the proper Backdoor.SDBot removal, you should get a reliable anti-malware tool or a program that can check the machine for cyber intruders and fix additional issues with the computer. We can recommend Reimage Reimage Cleaner Intego, SpyHunter 5Combo Cleaner, or Malwarebytes as reliable programs designed to detect such threats.

Remember that Backdoor.SDBot virus can be associated with other malware and perform various processes besides affecting the performance and speed of your PC. The full system scan checks all the places on your machine that malware can hide its files.

When you remove Backdoor.SDBot and other dangerous trojans or malware, ransomware cryptocurrency miners, reboot the machine in Safe Mode with Networking. This way anti-malware tool can work properly and delete all indicated threats.

Enter the Safe Mode with Networking and scan the system with an AV tool for Backdoor.SDBot removal

Finally, you should always think about the protection of crypto-ransomwares. In order to protect your computer from Backdoor.SDBot and other ransomwares, use a reputable anti-spyware, such as Reimage Reimage Cleaner Intego, SpyHunter 5Combo Cleaner or Malwarebytes

Your opinion regarding Backdoor.SDBot Cancel reply

You can quickly scan the QR code with your mobile device and have Backdoor.SDBot manual removal instructions right in your pocket.