Trojan.AOL.WAOL is a Trojan horse which operates under the name of the legitimate America Online telecommunications company 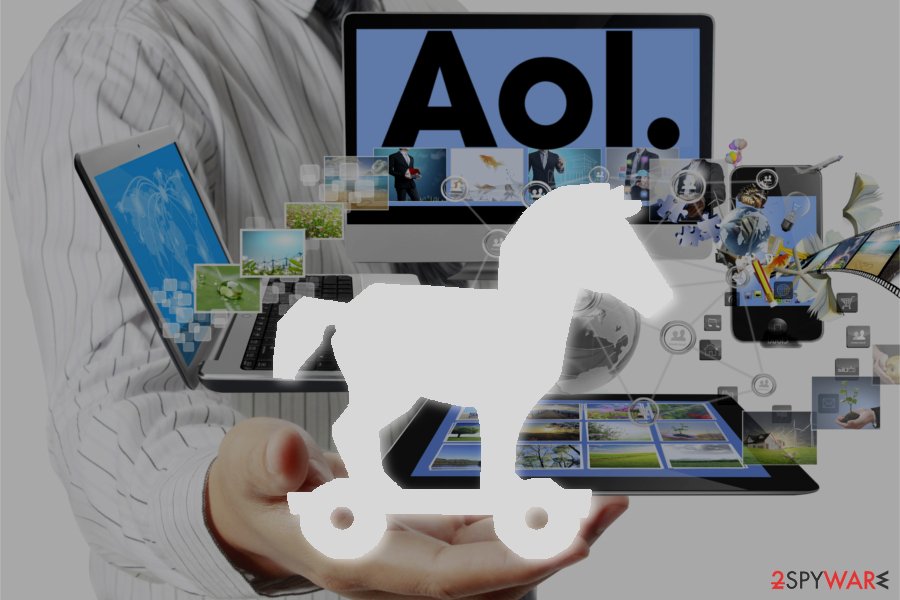 Trojan.AOL.WAOL is a virus which is also categorized as a Trojan horse. This malicious program disguises under the name of AOL (America Online) company which is an online service provider. Additionally, it might contain waol.exe executable file which is a part of the AOL user interface and allows users to log into AOL network. Usually, people cannot identify it as a potentially dangerous program as it hides deep inside the system and uses the name of a legitimate company.

The WAOL part of Trojan.AOL.WAOL stands for Windows America Online Launcher. This Trojan horse spreads in multiple different ways, including malvertising, malicious spam emails, and peer-to-peer (P2P) networks. According to the analysis, the application might make numerous copies of itself in the following directories:

Additionally, the developers of Trojan.AOL.WAOL have programmed it to run at the startup each time the user turns on the computer. However, since these type of infections are created using Visual Basic[1] programming language, they will only operate on systems with specific Dynamic-link libraries (.DLLs)[2]. Although, all users are advised to scan their computers with a reliable antivirus for safety. 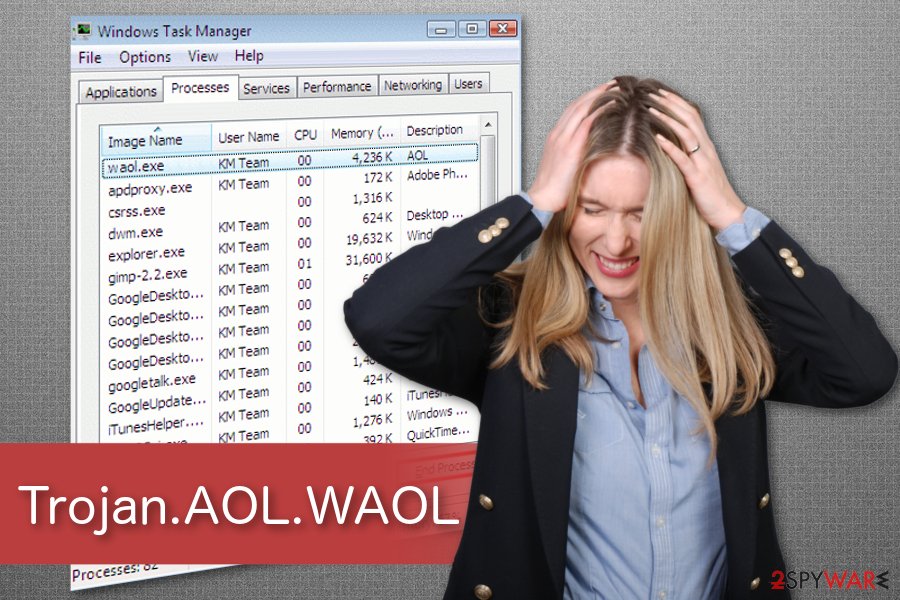 Trojan.AOL.WAOL is a dangerous cyber threat which might consist of waol.exe file as well.

Experts warn that Trojan.AOL.WAOL is a potentially dangerous program which might copy and save your keystrokes, desktop screen, and mouse movements. Such activity is performed since hackers behind the infection aim to steal credit card details and other personal information to generate illegal profits.

Furthermore, there is a substantial risk that Trojan.AOL.WAOL virus could provide remote access to the infected system for the criminals. In case it happens, hackers could perform the following activity with the help of this Trojan horse:

It is essential to remove Trojan.AOL.WAOL as soon as you notice its presence. Since novice computer users do not have the necessary experience to detect this malicious program by themselves, experts recommend using a professional security software at all times and update it regularly.

Also, if the antivirus identifies this malicious program on the system, it will take care of Trojan.AOL.WAOL removal immediately. For this reason, it is the best option when trying to protect your PC from various cyber threats. Our top recommendation is Reimage Reimage Cleaner Intego.

Distribution of malicious programs is based on the credulity of computer users. In other terms, most people tend to click on various suspicious online ads and download software from shady websites carelessly. Likewise, a vast of Trojan horses a distributed with the help of malvertising or on peer-to-peer (P2P) file-sharing sites.

Usually, AOL Trojan can infect the system via deceptive online ad — once clicked, bogus scripts activate an automatic installation of the malicious program on the system. Therefore, experts advise users to stay away from all commercial content which is not reliable.

Furthermore, people tend to download software cracks or music illegally on shady websites from other online users. Unfortunately, criminals take advantage of inexperienced people and disguise malicious programs under the appearance and name of the legitimate software. Thus, people unexpectedly download the virus.

For this reason, you should take the following precautionary measures to avoid AOL.Trojan:

The professional anti-malware will help you get rid of Trojan.AOL.WAOL

Trojan.AOL.WAOL virus is designed to not only place and hide its components and copies in multiple folders on the system but also modify registry keys to run automatically every time the computer is turned on. Thus, there is a strong risk that regular PC users won't be able to get rid of this cyber threat on their own.

NoVirus.uk[3] team says that the best way to remove Trojan.AOL.WAOL is to get help from a reputable and robust antivirus. You should download the security software from the official website and let it scan your computer files. Professional tools contain regularly updated virus databases which help them to terminate Trojan horses effectively.

For Trojan.AOL.WAOL removal we highly recommend using Reimage Reimage Cleaner Intego, SpyHunter 5Combo Cleaner, or Malwarebytes. These security applications are easy to use and offer full protection from the malicious programs as well as clean the computer from potentially unwanted programs (PUPs) and improve its performance.

If you notice Trojan.AOL.WAOL operating on your system, the first thing to do is to boot your computer into Safe Mode with Networking as shown below.

Another way to reboot your system to Safe Mode is to use Command Prompt:

Finally, you should always think about the protection of crypto-ransomwares. In order to protect your computer from Trojan.AOL.WAOL and other ransomwares, use a reputable anti-spyware, such as Reimage Reimage Cleaner Intego, SpyHunter 5Combo Cleaner or Malwarebytes

Your opinion regarding Trojan.AOL.WAOL Cancel reply

You can quickly scan the QR code with your mobile device and have Trojan.AOL.WAOL manual removal instructions right in your pocket.