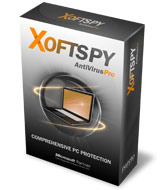 XoftSpy AntiVirus Pro (former XoftSpySE Anti-spyware) is a trusted anti-virus and anti-malware program made by ParetoLogic, Inc. It is a simple but effective tool, which offers a typical set of functions helping people remove spyware, viruses, adware, keyloggers, trojans and similar cyber infections. In order to check this program and its abilities, you can download XoftSpy AntiVirus Pro free version. Just like its licensed version, it offers a deep scan option, which gives people more chances to find specific viruses that may be secretly working in system's background. However, you should know that once XoftSpy AntiVirus Pro scanner finishes its work, it doesn't give its users ability to remove detected malware. Besides, this version does not give a real-time protection. XoftSpy AntiVirus Pro replaced XoftSpySE Anti-spyware in the middle of 2013. Its new features are firewall, web protection and email protection.

After reading different reviews on the Internet, we decided to download XoftSpy AntiVirus Pro and test it on our computers. As soon as we installed the program on them, we noticed that it was noticeably improved in comparison with XoftSpySE Anti-spyware: it has a well-organized visual user interface, offers frequent updates and provides detailed information after it finishes checking the system. After launching the program, it offers two options: a quick scan or a full system search for malware. If the moment for scanning the system is not right to you, you can simply schedule XoftSpy AntiVirus Pro scan for the future. It seems that XoftSpySE Anti-spyware bonus is its innovative Browser Helper Object Editor, which is dedicated for detecting and eliminating toolbars and other add-ons that have been actively spreading around recently.

XoftSpy AntiVirus Pro is an easy-to-use tool, which can help people scan the Windows registry, running processes, files and folders on your computer. XoftSpy AntiVirus Pro uses a large spyware definitions database, so its scan may have more pros than others' anti-malwares. However, its ability to prevent infiltration of viruses or fully remove them from the system may fail in some of the cases. That's why we recommend using XoftSpySE Anti-spyware in conjunction with other anti-viruses.