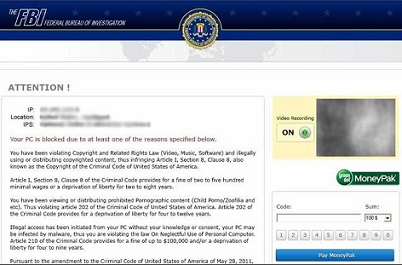 The virus called FBI Ransomware which is infecting computers all over America demands money from victims to avoid FBI prosecution. The targeted computer suddenly becomes unusable, and a quite legitimate looking page pops out in a web browser. It’s such a huge scam, that the FBI and IC3 (Internet Crime Complaint Center) has issues a detailed alert about FBI Ransomware scam.

People have to understand several facts:

Now the main question you would have on your mind is “how did I get infected?”. First of all – you should check your computer’s security. Are you using an up-to-date antivirus program? This type of scam is not a new one in Internet, however, hackers are working to make it better and harder to detect. all they need to change is the files they use, and it becomes hard for anti-virus to find them. That’s why you need to use an updated version of antivirus software, because it constantly gets new virus definitions.

Actually, the scheme of this criminal activity is quite interesting. Here we show you a simplified scheme of how hackers earn money: 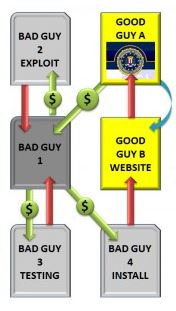 Bad Guy 1 buys exploited software from Bad Guy 2. Then Bad Guy 1 creates a piece of malware from the brought software, which can take over a computer and demand to pay a fine.? After that, Bad Guy 1 pays Bad Guy 3 to test and upgrade the malware to increase the chances to evade antivirus detection. A fourth bad guy is then paid money to hack into an innocent website to upload malware, in this case the website which belongs to Good Guy B.

When Good Guy A finds and innocently clicks on a link to go to the website of Good Guy B -> the malware which is dropped there is immediately installed onto Good Guy A’s computer and it’s computer gets locked down. When Good Guy A pays money for unlock,? Bad Guy 1 takes back his investment in this scheme, plus profit. And the way how good guys send money to unlock their PC can vary and similar scams in Europe have used systems like Ukash and Paysafe. American example uses MoneyPak, which is known as “green dot” – a service, which you may have seen in your local Walmart or Rite Aid.

The MoneyPak is a great way for scammers to get money, because the money which people send cannot be traced back. If you wonder how much can hackers earn from this scheme, Brian Krebs suggests that it’s possible to make about $50,000 per day. Hackers then just change the words in privacy policy to include Departament of Justice as a alleged payee to this fraud.

The fact is that people get infected just by visiting a random ordinary web page, which is compromised by hackers. This type of attack is called a drive-by attack and it can be “enhanced” through carious tricks that make people visit infected sites through spam or SEO-poisoning. There are thousands of websites compromised and this malware is growing day by day. The best way to avoid this scam is to use a good web browser and an antivirus program.

Additionally, FBI is working hard to catch those men who are using their name to scam people. Now, when this attack will be cooperated internationally with European countries, it might be easier to catch these hackers.