Lockout virus operates as a file-encrypting threat encrypting files with RSA-2048 algorithm and attaches .lockout file extension. It has a preference for Windows 7 users. After infiltration, and during next reboot, the malware changes regular startup screen with its ransom note entitled as cUrHj2m7C, etc. Certainly, the title might be differ depending on each user’s IP. On the startup screen, it suggests contacting the penetrators via bnd54@mail2tor.com and provide an identification number. It urges affected users to pay the money within three days. When you log into the computer, Payment-isntructions.txt opens up with the same information[1]. Otherwise, the amount of money will double. They also offer to decrypt one file for free to earn users’ trust. Even in that case, it does not mean that the cyber criminals will return all files undamaged. Thus, instead, we recommend you to proceed to Lockout removal. For that purpose, Reimage Reimage Cleaner Intego or Malwarebytes might be of use. 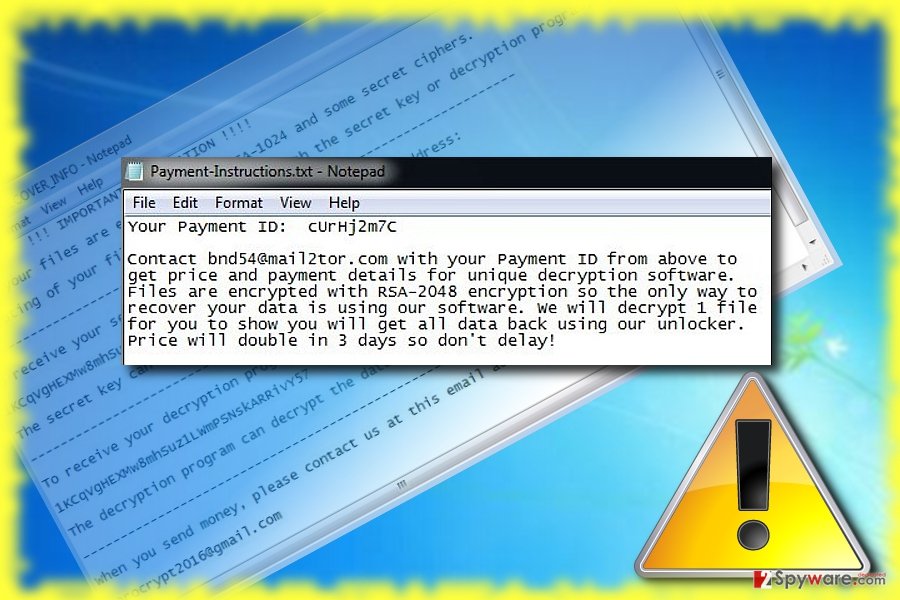 One of the peculiar features of the virus is its ability to modify boot settings. Thus, this function enables the malware to present its message at startup. Furthermore, the malware behaves like ordinary malware. It connects to Command and Control server to coordinate the malware and its traffic. Due to this ability recovering private, decryption, the key is not an easy task as well. Interestingly, that the definitions by which Lockout malware is detected, relate to a notorious Win32Heur trojan, which was active three years ago, HEUR:Trojan.Win32.Generic. Interestingly, that another recently emerged threat, XData virus[2], which rampaged in Ukraine and managed to occupy four times more computers than WannaCry during the same period of time, also contains references to HEUR trojan. Thus, there is a probability that the scale of the inflicted damage by this malware might rocket. Therefore, the ransomware tends to behave as a screen locker malware as well. Though at the moment, there is no free decryption tool released of the malware yet, you should remove Lockout virus as soon as possible.

Distribution tendencies of the malware

The distribution techniques of Lockout ransomware hardly differ from the other samples of the ransomware family. The fact, that its executable trojan, which might be detected as
W32.eHeur.Malware08, hides in c.exe executable suggests that it may target users in disguise of fake updates, questionable scanners, browser add-ons as well as spam emails. Note that such emails may contain alerting information, such as urgent messages alarming user to review attached files. Such emails may contain typos or grammar mistakes which suggest the origin of the email. Thus, in order to limit the risk of Lockout hijack, install and keep updated anti-malware programs. Besides, it is crucial to retain vigilance while browsing the Web and installing new applications or enabling new features. 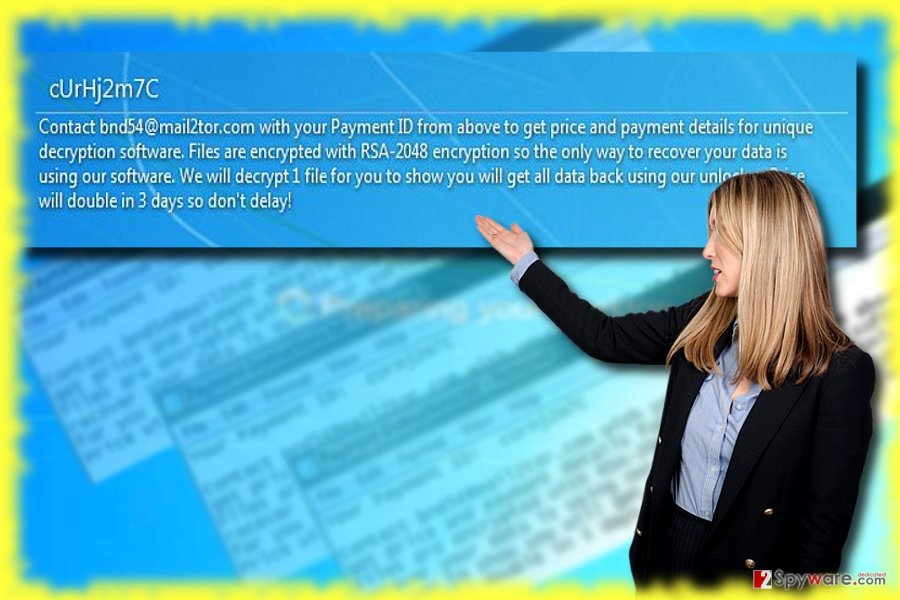 Unlike the majority of file-encrypting threats, Lockout virus presents its ransom note on a startup screen.

Regarding the fact that this malware might be related to menacing XData virus, it is crucial to remove Lockout virus right away. For that purpose, security applications come in handy. Taking into account that this malware may block your computer screen, you may face Lockout removal problems. In that case, below guide will come in handy. Thus, below indicated guide would be of use. You may also disturb its process by ending its c.exe task in Task Manager.

You may opt for this method in case Safe Mode does not recover full control of the device. Then continue Lockout removal.

Guide which is presented above is supposed to help you remove Lockout from your computer. To recover your encrypted files, we recommend using a detailed guide prepared by 2-spyware.com security experts.

If your files are encrypted by Lockout, you can use several methods to restore them:

In case you failed to make backup copies in advance, there is a chance that you may succeed in recovering some of the files with the help oof this program.

What is Windows Previous Versions feature?

In case, system restore was previously activated, you attempt to recover previously saved copies of your files. Note that this process takes time.

ShadowExplorer and the files encrypted by Lockout malware

There is information that the malware deletes shadow volume copies, so it is likely that this program may recover some of the files by using this method.

What about Lockout Decrypter?

Let us warn you not to install the decryption software offered by the developers of this malware, you may only create more vulnerabilities for the malware to re-hijack the computer again.

Finally, you should always think about the protection of crypto-ransomwares. In order to protect your computer from Lockout and other ransomwares, use a reputable anti-spyware, such as Reimage Reimage Cleaner Intego, SpyHunter 5Combo Cleaner or Malwarebytes

You can quickly scan the QR code with your mobile device and have Lockout ransomware virus manual removal instructions right in your pocket.