What lies behind the mischief of Smash virus?

Despite whether you are a fan of Super Mario video game or not, you might be targeted by Smash! virus. Initially, it looks like ransomware since users are demanded to enter a 7-digit code to save their personal files from getting deleted. The program which is called Smash! ransomware starts the process of counting the time until the elimination of files. What is more, it includes the image of a character from Super Mario game series. Luckily, it is not difficult to remove Smash! from the device. Though it is not as dangerous as Locky or Cerber, it is useful to know how much damage this virus can inflict and whether there are ways to avoid it. At the end of this article, you will find the Smash removal guide. Start the process with Reimage Reimage Cleaner Intego.

The good news is that the virus does not encrypt your files nor does it delete them after the specified time runs out. Though this threat is merely a prank, you should not disregard this cyber infection. It still manages to sneak into devices in insidious ways. Thus, once the virus finally invades the targeted computer, it opens up the window with the Super Mushroom character from the Super Mario Brothers game series. After that, it starts showing amusing and flirty messages. At the beginning, such playful way might cause a surge of adrenaline in users’ blood, as the virus threatens to delete all files after “file kill time” ends. 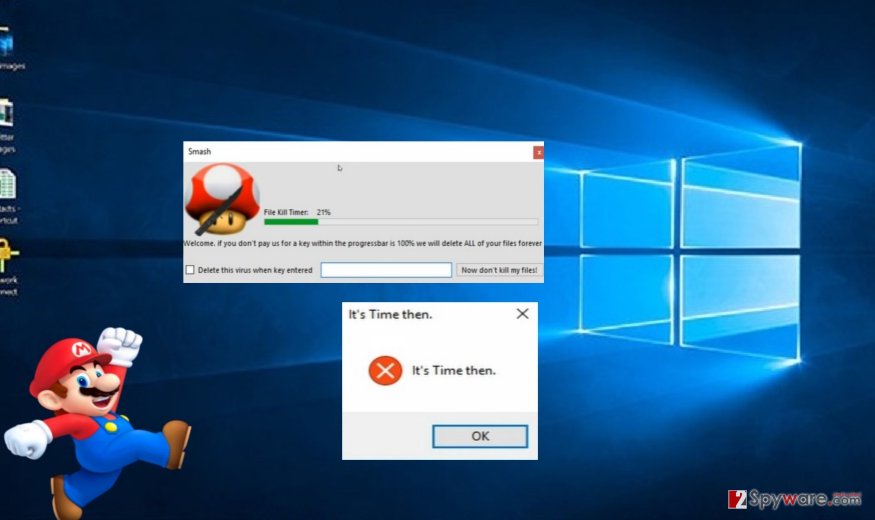 When the process reaches the final stage, a message pops up saying that “it’s time then”. To your surprise, nothing happens. The files remain unaffected. Nonetheless, if you want to launch Command Prompt or Registry Editor or simply exit the window, Smash malware shows “no registry editor for you” or simply “no” messages. The virus also attempts to cancel the commands launching the mentioned programs. If you enter the code into the bar requiring the 7-digit key, no changes occur. This is because the source code of this function is empty.

After analyzing it, it has a striking resemblance to In-development virus or alternatively called Click Me Game ransomware. The latter became an exceptional example of malware in the virus world by showing a mini-game for users. After a specific amount of time expired, the message including Facebook memes appeared saying that all the files would be encrypted. However, no ransom was specified, so this cyber infection also turned out to be a mischief.

When did the virus get into my PC?

Smash! hijack may have taken place when you recklessly installed infected add-ons along with your wanted application or when you clicked on a corrupted link in a P2P file sharing a domain. Likewise, the malware sneaked into the device. Luckily, this virus does not plant its specific registry keys nor it meddles with autorun settings, which would enable it to rerun after the system reboot. You can simply restart the device to cancel the messages of this threat. Though some virus researchers disregard this threat and call it rather “cute,” it is unwise to let your guard down. The appearance of the infection similar to In-development virus shows that the same hackers might be fooling around and they might have more destructive ambitions. In short, such mischiefs might evolve into serious threats soon enough.

It is unwise to take this threat too lightly taking into account the distribution and frequency of such cyber infections. The fastest way to eliminate the threat would be to use an anti-spyware application, e.g. Reimage Reimage Cleaner Intego or Malwarebytes, to remove Smash! virus completely. This tool comes in handy battling more serious viruses. Personal participation in ensuring cyber security plays a significant role as well. If you fail to update the security applications daily and click on any suspicious link without considering the dangers of such recklessness, then it is a high risk to get caught up in the trap of a highly damaging virus. No matter how amusing this virus looks, Smash removal should be performed right away.

Guide which is presented above is supposed to help you remove Smash from your computer. To recover your encrypted files, we recommend using a detailed guide prepared by 2-spyware.com security experts.

If your files are encrypted by Smash, you can use several methods to restore them:

What does Data Recovery Pro do?

This tool comes in handy when real ransomware encrypts personal files. If you do not have a backup or specific decrypter, then this software might be one of the last chances to recover the files.

Finally, you should always think about the protection of crypto-ransomwares. In order to protect your computer from Smash and other ransomwares, use a reputable anti-spyware, such as Reimage Reimage Cleaner Intego, SpyHunter 5Combo Cleaner or Malwarebytes

You can quickly scan the QR code with your mobile device and have Smash ransomware virus manual removal instructions right in your pocket.