Hermes 2.1 is a ransomware virus which is using AZORult trojan horse to spread around

Hermes 2.1 is a dangerous cryptovirus which is relying on several ransom notes which ask their victims to transfer the cryptocurrency in exchange for the decryption key.

Hermes 2.1 is a ransomware-type cyber infection that belongs to the same family as Hermes ransomware and Hermes 2.0. It was detected at the end of 2017 by the group of cybersecurity experts attacking computers of English-speaking users. In March 2018, a new Hermes 2.1 ransomware variant has been detected. This time, it was targeting South Korea PC users via 7 exploit kit called GreenFlash Sundown Flash Player, which helped the virus to infiltrate systems undetected. The new variant is using AZORult trojan horse to get into target PC systems. In addition, the virus encrypts files by using a combination of RSA public key and AES cipher. Each encrypted file gets a .HERMES or .hrm file extension. At the moment, the virus is appending [unlockmeplease@cock.li ].hrm file extension.

The main difference between the older and newer version of Hermes 2.1 is that it has started using a new file marker at the end of the compromised file's content. According to the previous analysis, it used to leave HERMES file marker while now it has been supplemented with numerous random characters and symbols. So, only some part of Hermes 2.1 virus variants are appending [unlockmeplease@cock.li ].hrm or .HRM file extensions.

However, it is not the most important feature of the updated version. The latest offspring now combines AES-256 algorithm which is encrypted by RSA-2048 algorithm. This change makes it only harder for IT professionals to generate the decryption key because each encoded file features a diverse coding.

Although, other features of Hermes 2.1 remain the same — its developer still places the mp3 code of Vivaldi‘s Spring composition[1]. Additionally, the perpetrator continues to mention Wichita State University located in Kansas city and leaves two emails with considerations whether these details were left intentionally or unintentionally: 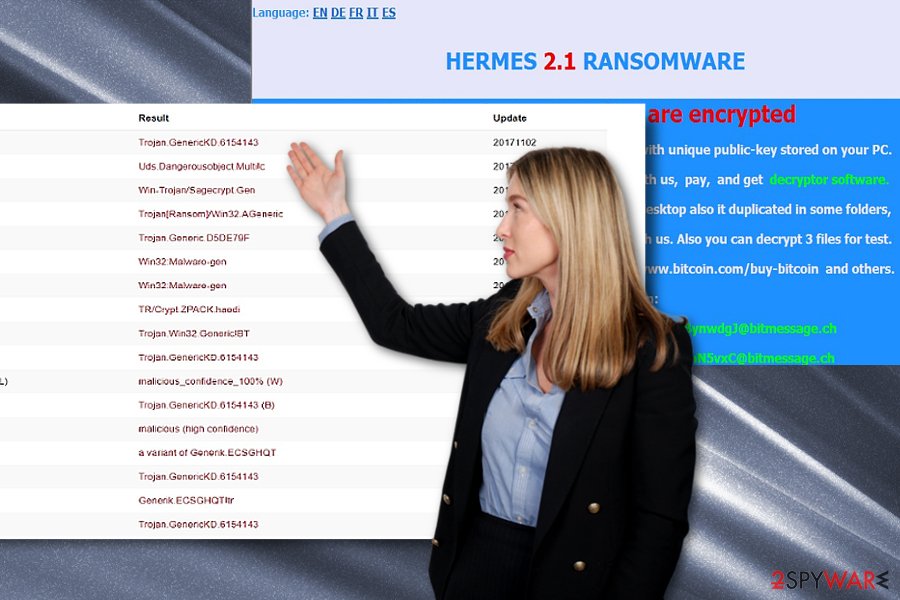 Hermes 2.1 ransomware has been updated and ditched using .HRM extension as well as left a different file marker at the end of the encrypted file's content.

Fortunately, Hermes 2.1 malware and its newest version are already detectable by the majority of security applications as Trojan[Ransom]/Win32.AGeneric, Ransom.Hermes. Trojan.GenericKD.6154143, etc. It functions via the file called as ClrgraphicsOperation and My video.exe.

Certainly, the malware might disguise under alternative file. If you noticed some of your files already locked and marked with the .hermes, .HRM or .[unlockmeplease@cock.li ].hrm file extension or you receive DECRYPT_INFO.txt, and DECRYPT_INFORMATION.html, it is high time you initiated Hermes 2.1 removal.

You can remove Hermes 2.1 with the help of one of professional security software. We suggest using ReimageIntego, but first, your must disable the virus to unblock your system and get access to download the antivirus. Learn how to do that from the guide which is attached at the end of this article.

Hermes 2.1 is relying on AZORult trojan horse while spreading around the globe.

Ransomware payload is being distributed via malicious Word Office documents. Multiple scam campaigns have already been initiated to spread the payload widely. The first attack has been initiated via compromised Korean website at the end of February 2018.

Once the Hermes 2.1 ransomware payload is executed, it creates a svchosta.exe file in %TEMP% folder. During the execution, the victim is asked for a permission to run the script. Even though the permission is not given, the virus starts encryption anyway.

Hermes 2.1 is hailing from a notorious Hermes family which is using several file extensions to mark encrypted files.

Upon encryption, it creates a file UNIQUE_ID_DO_NOT_REMOVE, which contains private RSA key and a ransom note named DECRYPT_INFORMATION.html in C:\Users\Public\ directory. The ransom note contains the following information:

All your important files are encrypted!

Your files have been encrypted using RSA2048 algorithm with unique public-key stored on your PC.
There is only one way to get your files back: contact with us, pay, and get decryptor software.
We accept Bitcoins, and other cryptocurrencies, you can find exchanges in bestbitcoinexchange.io
You have unique idkey (in a yellow frame), write it in letter when contact with us.
Also you can decrypt 1file for test, its guarantee what we can decrypt your files.

Each encrypted files gets the HERMES file extension. The victim is asked to contact the crooks via pretty040782@gmail.com, pretty040782@keemail.me or unlockmeplease@cock.li. The size of the ransom is unknown, though it may vary from 200 to 1500 USD.

Ransomware researches noticed an interesting tendency of this ransomware to exit the encryption code it detects registry key for Russian (0x419), Belarusian (423), or Ukrainian (422) language codes. Thus, we can only guess that the North Korean hackers are collaborating with Russian-speaking countries.

The original Hermes 2.1 ransomware variant is known to be cracked down after security experts created a free Hermes decryptor. Despite some minor modifications, the core behavior of all three variants of this ransomware is very similar, so you should try a free decryptor. 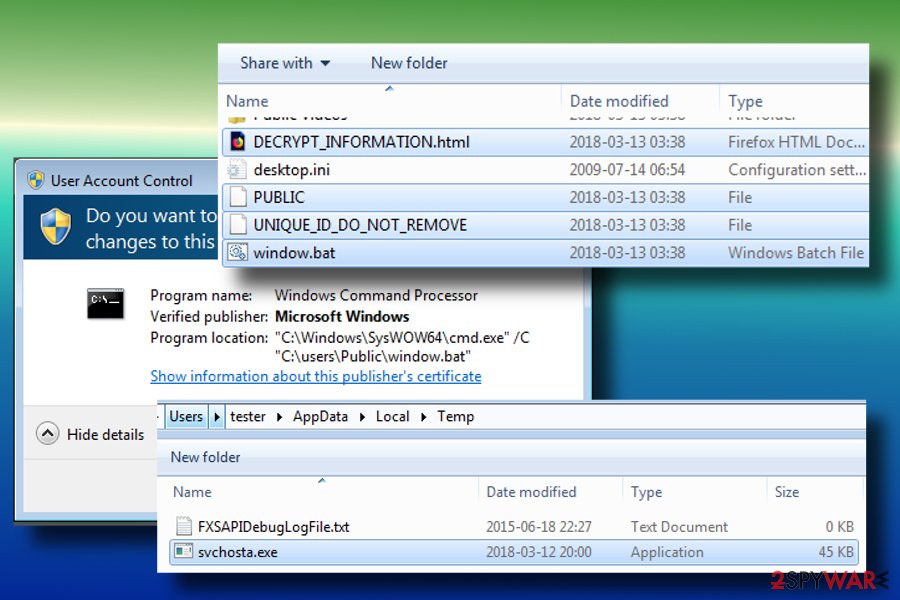 If the decryptor failed to unlock your files, the best solution you have is to remove Hermes 2.1 completely and then recover your data using backups or other alternative methods.

Those who wonder how to protect themselves from this infection has only one option – to install a reputable anti-virus and keep its definitions up-to-date. Besides, stay away from questionable email messages and DO NOT open their attachments.

Unfortunately, criminals employ multiple distribution techniques to help them infiltrate the ransomware on as many computers as possible. As a result, it might become hard to identify the potential sources of this dangerous cyber threat. However, we aim to raise awareness and help regular computer users protect their systems.[4]

These are the most common attack vectors of ransomware:

Considering the executable name, it is likely that the malware is spread in gaming sites at the moment. If you value your data, you should consider avoiding such domains. It is common knowledge that pirated software, keygens, and cracks have been popular tool exploited by malware developers.

Likewise, in order to limit the possibility of Hermes 2.1 hijack, install a couple of different security applications. In addition, be careful reviewing spam emails especially if they are sent by the official institutions. Examine the content of the message and inquire the official institution again to verify the received attachment.

Instructions on how to uninstall Hermes 2.1 virus

Unfortunately, ransomware-type viruses are explicitly dangerous and hazardous computer threats. Even IT experts might struggle to remove Hermes 2.1 from the victimized systems. Likewise, regular computer users should not try to eliminate the malware without any assistance.

If you found [unlockmeplease@cock.li ].hrm, .hermes or .hrm file extensions appended to your files, you need to get rid of Hermes 2.1 with the help of robust malware removal software. However, this is a complex virus which might block your system and prevent you from installing the antivirus. You should de-activate the ransomware by booting your computer into Safe Mode.

Instructions on how to do that are appended at the end of this article. Afterward, you should be able to access the tool and complete Hermes 2.1 removal. Only after the elimination is complete, proceed to data recovery. Experts from DieViren.de[5] suggest you might try using the free Hermes decrypter designed for the original version.

It is important that you disable the ransomware before installing antivirus software. If you fail to do so, it will block you from downloading any content which might be used against the virus. Learn how to boot your system into Safe Mode with Networking:

Here is another method which might help you circumvent the system of the ransomware:

Guide which is presented above is supposed to help you remove Hermes 2.1 from your computer. To recover your encrypted files, we recommend using a detailed guide prepared by 2-spyware.com security experts.

If your files are encrypted by Hermes 2.1, you can use several methods to restore them:

Initially, experts have developed this tool to assist the users if their information has been damaged during the system crash or they unintentionally deleted them. However, in some cases, it might be helpful if you are the victim of ransomware attack as well.

Since Hermes 2.1 is an offspring of the original Hermes program, you can try using its decryption tool here. You will have to provide an encrypted file and its original, just drag and drop them on the executable. However, if the hackers fixed flaws related to their first version, the decrypter can fail to work.

Finally, you should always think about the protection of crypto-ransomwares. In order to protect your computer from Hermes 2.1 and other ransomwares, use a reputable anti-spyware, such as ReimageIntego, SpyHunter 5Combo Cleaner or Malwarebytes

You can quickly scan the QR code with your mobile device and have Hermes 2.1 ransomware virus manual removal instructions right in your pocket.