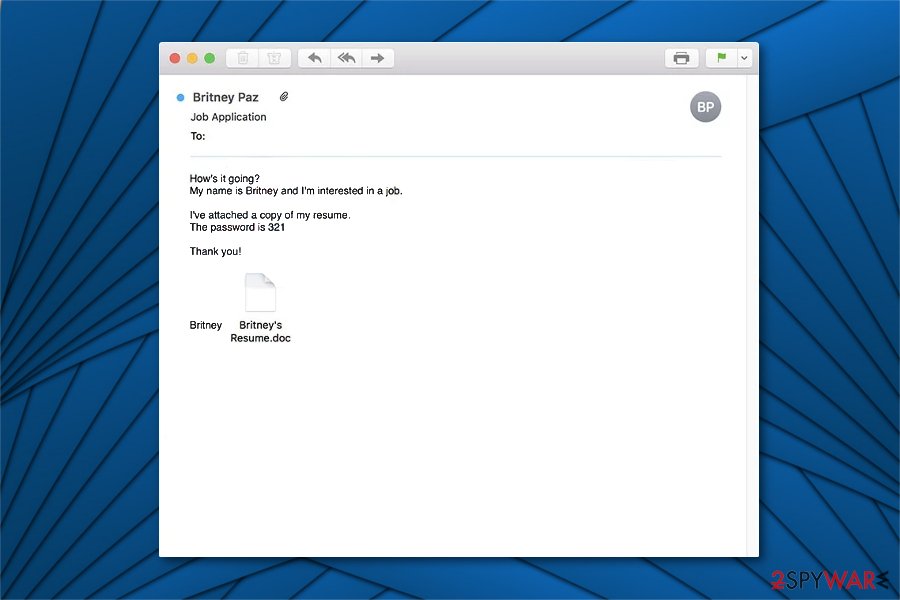 AZORult Trojan is the cyber threat that can get loaded without any indications and run in the background while collecting data from the system or the browser. The main purpose of the virus is to collect valuable information without getting noticed, so it is often dropped as a secondary payload, like in Djvu family attacks. This threat gets loaded after recent versions in this ransomware family get done with encryption processes, so valuable data can also get used for blackmailing. The virus can target banking information, sensitive or personal details, or get spread around on the network of a large company or government to gather valuable data.

This Trojan horse has been spreading via malicious spam emails that impersonate job applications, e.g. “My name is Britney, and I'm interested in a job.” The virus is using a backdoor[1] feature to infect systems with more dangerous infections. Recently, AZORult virus was spread by Aurora ransomware, threats like Mosok, and other malware. In addition, it can be used to collect valuable personal information and then transfer it to its developers or the C&C server. Keep in mind that it might later be used for phishing purposes and lead to financial losses. The more recent campaigns where this trojan got involved used Coronavirus pandemic theme[2] to attract visitors to fake sites that triggered malicious code and dropped info-stealing trojan.

The most notable feature of the AZORult virus, which makes it exceptionally dangerous, is the keylogging.[3] In other terms, this cyber threat is programmed to record keystrokes, open spoof login windows that look legitimate and collect credentials, personal data, and additional valuable information for the developers of the stealer.

Keep in mind, that personally identifiable data is highly valuable for the attackers as they might sell AZORult stealer in the underground market and earn illegal profits. Such activity not only puts your privacy at risk but also may lead to enormous financial losses by unauthorized transactions from your bank account.

Additionally, AZORult virus could be capable of providing remote access to the attacked system for hackers. Likewise, cybercriminals could use a backdoor feature to open paths for more malicious programs and damage the computer permanently.

This AZORult trojan is mainly interested in getting logins and passwords for cryptocurrency wallets and other banking or credit services, so accounts can get hijacked and used to obtain money directly from victims. There might be some different versions of the trojan, so multiple scenarios can be implemented. 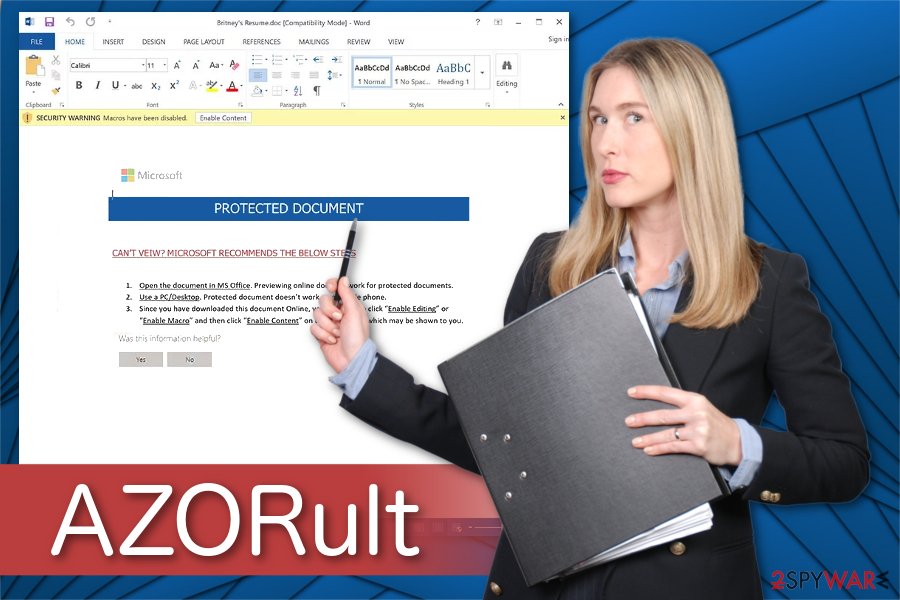 AZORult virus is a dangerous cyber threat which spreads via fake job application emails. The presence of this trojan on the machine cannot show any symptoms, but leas to serious privacy and identity theft issues. You may encounter suspicious processes running in the background on Windows Task Manager and question the state of the infected system. You need to react to such issues as soon as possible, because these symptoms may occur only after the infection and all the malicious processes.

For all the reasons mentioned above, we strongly suggest you remove AZORult virus as quickly as possible. Since the infection does not display a visible window, you may not be able to identify it in the first place. Therefore, the wisest decision would be to get a professional antivirus program that could clean the machine from various malware traces and the intruder.[4]

On the other hand, Reimage Reimage Cleaner Intego is an excellent choice for fixing virus damage after AZORult removal as it can change system files and registry entries. If you can't install the security software, you should boot your computer into Safe Mode. Free instructions showing how to do so are appended at the end of this article.

Scammers used John Hopkins Coronavirus map to spread malicious code with files triggering the AZORult trojan infection.[5] The virus has spread to almost all continents and raised panic, questions when the danger reached pandemic level. People all over the globe each second tries to access new information about levels of infected people and deaths or the rate of spreading. This is why live updates, maps about the outbreak are popular among internet users.

The site Corona-Virus-Map.com became very popular quickly, and bad people used it for their own gain. Malicious code was found hidden on the site. Also, the infection related to the same code has been spreading around with the help of emails with subject lines like “urgent”, “important”, ”official” also stating about pandemic updates.

The domain analysis showed that it is registered in Russia. The fake Johns Hopkins site scrapes data off of the original site, to keep users attracted with up-to-date information in real-time. In the meantime, malicious codes lure in the background waiting for victims' interaction and triggering. 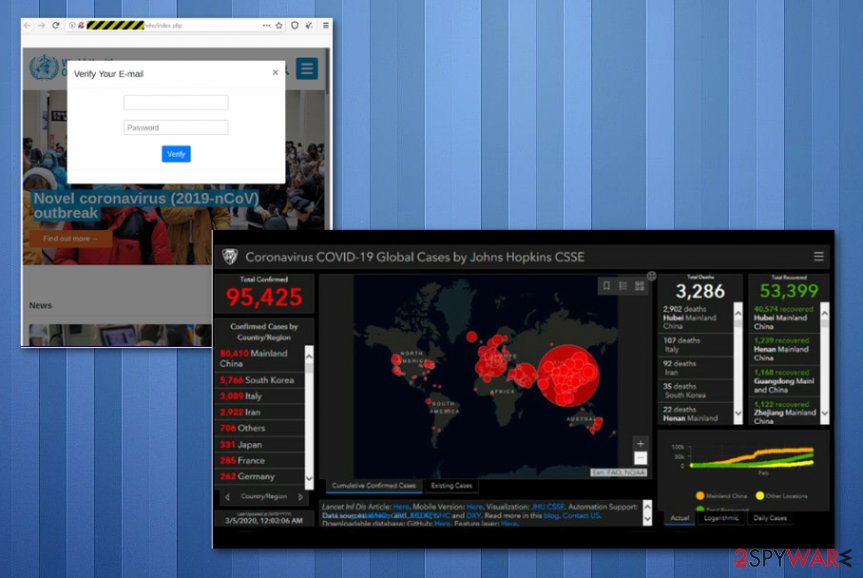 AZORult is the trojan that gets distributed around the internet with the help of spam campaigns or malicious websites, other threats. Researchers stated that malware functions as a redirect at first, and it triggers the reroute to the original John Hopkins site. Then, malware gets installed directly on the machine, automatically reporting to the C&C server that attackers control. The virus creates chain infections and installs programs, opens backdoors, steals data at the same time. In most cases, none of the activities can be noticed by the victim because it is created to infiltrate the computer and remain silent.

In other Coronavirus pandemic news, criminals also use scammy sites seeking donations for alleged charities and foundations surrounding the virus. Be cautious when donating to any organization and pay attention to content and suspicious details while browsing online, in general.

According to the researchers[6], this trojan horse spreads via malspam campaign sending malicious emails as job applications. Users receive electronic letters asking to apply for a job place. Additionally, the message includes the .doc resume file, which is protected with a password.

Unfortunately, this is a trick used to lure unsuspecting computer users into opening the malicious attachment with the payload of a trojan horse. Keep in mind that cybercriminals are highly advanced as the password protection feature prevents users from scanning the file with an antivirus before opening.

Therefore, you should be exceptionally cautious and recognize an attempt to infect your computer with a malicious program immediately. Note, do NOT click on the attachment and refrain from opening the email in the first place. In fact, never click on any inbox content which comes from people or companies you don't have business with.

Remove AZORult virus with the help of a security tool

A proper virus analysis showed that manual elimination of the virus is almost impossible. Trojan horses are sophisticated and may find ways back to the system if a regular computer user fails to get rid of it properly. Luckily, you can remove AZORult automatically with a professional antivirus. Security tools like SpyHunter 5Combo Cleaner, or Malwarebytes can help you with the security of the system and such virus termination.

Once you are done with eliminating malicious files, download and scan your computer with Reimage Reimage Cleaner Intego. Once it detects system damage or affected, corrupted parts, it will perform system recovery, which is an important step after the AZORult removal. If you have struggles installing the security tool, try disabling the virus by rebooting your system into Safe Mode, as shown in the instructions below.

Make sure to clean the machine using professional tools that can clean the system fully from the AZORult virus and double-check with a few alternate AV tools to make sure that your device is cleared completely. Any traces of this trojan or another malicious infection can trigger more issues with your device.

Guide showing how to boot the computer into Safe Mode with Networking:

Use System Restore to disable some virus functions and get a chance to launch the anti-spyware tool.

Finally, you should always think about the protection of crypto-ransomwares. In order to protect your computer from AZORult and other ransomwares, use a reputable anti-spyware, such as Reimage Reimage Cleaner Intego, SpyHunter 5Combo Cleaner or Malwarebytes

You can quickly scan the QR code with your mobile device and have AZORult virus manual removal instructions right in your pocket.