The dangers of Stampado virus

Hackers have released another file-encrypting infection — the Stampado virus. Comparing it with other samples of the same virus group, this malware appears to be operating as a ransomware-as-a-service as well. Lately, virus researchers have detected this virus being sold on the darknet for only $39. It is likely that hackers intend to leave no vestige and disappear with the money. In any case, this ransomware should not be underestimated. It encrypts personal files with a popular AES-256 algorithm comprised of a complex mathematically interrelated set of codes. Surely, this ransomware is not a small fry and if your computer has been invaded as well, then, make a rush to remove Stampado before things get worse.

There have been some prior cases when hackers decided to drop their business and sell their creations. Encryptor RaaS and Tox viruses are perfect examples. In the case Stampado malware, cyber criminals do not intend to compete in the dark market and offer the ransomware for a ridiculously cheap price. What is more, after paying the money, there are no additional conditions. The new owners are said to obtain the virus for a lifetime. Furthermore, some suspect that the hackers sympathize with the previously rampaged Locky virus since Stampado attaches .locked extension to all encrypted files. This extension is well-known for being used with .locked. Additionally, according to the newest reports, the threat appends multiple different extensions, which are distinguishable traits of other ransomware, to the files.  In the promoted website, the virus may be downloaded in an .exe, .bat, .dll, .scr or .cmd file. Currently, the virus presents a bunch of addresses for the address for the contact purposes including teste@email(.)com, successl@qip(.)ru, paytodecrypt@sigaint(.)org or getfiles@tutanota(.)com. 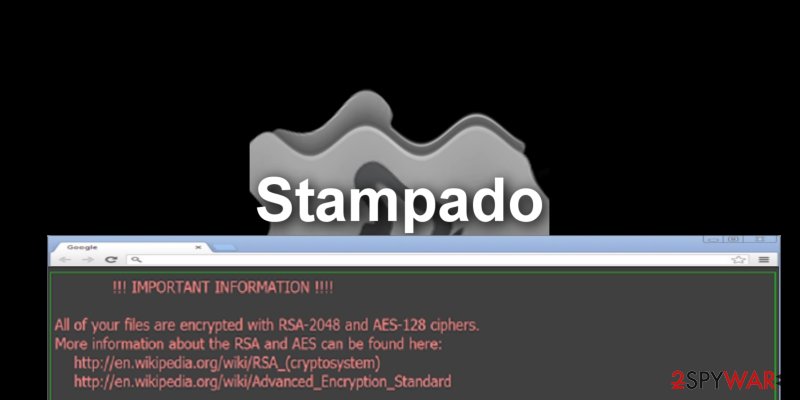 This ransomware might truly become a big player among the viruses for its qualities. Since it uses an elaborate algorithm, decrypting the files without the private key is a real challenge. Additionally, the virus developers employ psychological pressure to urge victims to pay the ransom. Until the transaction is made, random encrypted files are deleted every 6 hours. Due to this peculiarity, the threat received the title of the “Russian Roulette.” The victims are given a 96 hour deadline to pay the money. After the period expires, the encoded data will be lost completely. In any case, you should resist the hackers' pressure and not transfer the cash. There are no guarantees that the data will be returned anyway. Thus, we recommend concentrating on some more realistic and safer data recovery techniques like, of instance, the ones provided at the end of this article.

For a while, it seemed that Stampado moved in the shadows as the ransomware subsided. Unfortunately, it was only calm before the storm. Recently, the developer of this parasite hit the virtual community again, shattering hopes that hackers may have a little sense of decency left. Originally, if one ransomware encrypts your data, other file-encrypting malware automatically evades such files. Nonetheless, the current version of Stampado is able to encode the locked files once again. It means that if you are collecting a ransom for the affiliate virus distributor, you might consider transferring another share to the original owner of this threat as well.

Finally, after months of the unknown, the Stampado ransomware victims can relax. The virus analysts have come up with a tool capable of bypassing the virus encryption and unlocking your files. The decrypter has been developed by Emsisoft company and is easy to use. To make it work, you will need to provide an email address that the hackers indicate in the ransom note as well as the identification number they give you. The decryption software developers ask the users to mind the capitalization when inserting these two variables into the decrypter because this information is case-sensitive. Otherwise, if you follow the instructions attentively, the data decryption should not cause additional difficulties. Just do not forget to remove the virus from your computer so it doesn't encrypt any more of your files! As for the decrypter itself, you will find its download link next to the data recovery instructions which you can also use in case some new virus version has taken over your PC and the decryptor does not work.

When does the ransomware occupy computers?

Currently, the ransomware is distributed mainly on the darknet. However, with such fair price for the ownership of the virus, it is only a matter of time when the major distribution campaign of Stampado ransomware will be launched. There are multiple theories of how the malware will be spread. Now spam emails are the most popular method. Keep in mind that hackers create highly persuasive and manipulative strategies. Do not rush to open emails sent from transportation agencies, customs, or tax institutions. Their attachments might hide one of the previously mentioned .exe or .dll file with the ransomware within.

The other theory suggests that some hackers might use exploit kits, in other words, trojans. The latter method is extremely dangerous since you cannot possibly detect this sort of malware without having a proper anti-spyware application, for example, Reimage Reimage Cleaner Intego. It is of crucial importance to block the trojan before it launches Stampado. Thirdly, other cyber criminals or ransomware sympathizers may opt for P2P file sharing domains or pornographic websites. Since the latter is quite popular among certain groups of users, the probability of getting infected increases all the time.

The elimination of Stampado

We suggest deleting the ransomware by using malware removal utility. This and the primary anti-virus application, are the combination which ensures that no file-encrypting threat sneaks into the computer. The anti-spyware application, for example, Reimage Reimage Cleaner Intego or Malwarebytes, is also capable of deleting the threat completely. However, if you encounter problems related to Stampado removal, check the instructions below. After all, users should stay vigilant while surfing the Web because their security of the operating systems is continuously being tested by more and more powerful malware. Lastly, check free Stampado Decrypter below on this page.

Guide which is presented above is supposed to help you remove Stampado from your computer. To recover your encrypted files, we recommend using a detailed guide prepared by 2-spyware.com security experts.

For a long time Stampado ransomware was though to be virtually uncrackable. Not until recently, though, when the virus experts have finally come up with Stampado Decrypter and enabled all of the virus victims to decrypt their personal data. Scroll below to learn how to use this tool. You can also use PhotoRec, R-Studio or Kaspersky virus-fighting utilities or Data Recovery Pro to recover your data in case the decryption tool does not work.

If your files are encrypted by Stampado, you can use several methods to restore them:

This tool is a practical software for recovering and finding deleted or damaged files on your computer. Learn how to use it below:

Famous virus researcher Fabian Wosar developed this free tool for the victims of this ransomware. To use it, you will need to provide the malicious email address that belongs to virus developers and your ID. Then click the “detect” button to reveal your personal “salt”. Since the latest updates, the virus is able to encode the decrypted files again, so make a rush to download and recover your files before it causes more problems on your computer. Do not forget to remove the virus before starting the file recovery process with programs that are given below.

Finally, you should always think about the protection of crypto-ransomwares. In order to protect your computer from Stampado and other ransomwares, use a reputable anti-spyware, such as Reimage Reimage Cleaner Intego, SpyHunter 5Combo Cleaner or Malwarebytes

You can quickly scan the QR code with your mobile device and have Stampado ransomware virus manual removal instructions right in your pocket.