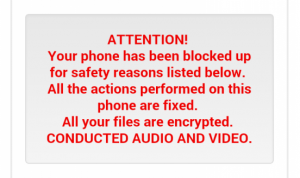 You must have heard about ransomware viruses that have been spreading around for almost two years. After starting with Reveton, threat that locks desktops and displays a misleading message asking to pay a fine for viewing copyrighted content and similar invented laws, scammers invented Cryptolocker – a virus, which has ability to encrypt victims’ files and demand a Bitcoin payment for their recovery. If you don’t have a backup, possibility to recover your files without making a payment becomes equal to zero.

However, it seems that this is not the end. If you are the owner of Android smartphone, you should make sure that you have a tool that protects it against Android malware, which was named by several security experts as Android.Trojan, Koler.A or simply Korel.

Just like previously mentioned Reveton virus, Koler locks the phone with a fake message that reports about various law violations and then asks to pay a fine (the message can be seen in the picture). In most of the cases, this virus presents itself as a message from the law enforcement agency and reports about the use of copyrighted content, distribution of child pornography and similar invented crimes. The governmental authority is selected according to victim’s country, so if you live in USA, you can expect a message from FBI. Those who live in Great Britain will receive an alert from Police Central e-crime Unit or other local institution. Of course, you should never pay the ransom.

How can you infect your device with Android malware? It seems that this virus is NOT one of those ransomwares that exploit security vulnerabilities for entering systems behind people’s back. Koler pop-ups and asks user’s approval. Of course, in most of the cases it is masked under a genuinely-looking name. You can easily get infected with this virus after allowing the app from non-approved sources, such as driver to help you watch a video with adult content and similar app.

Remember, you can be sure only about those apps that are available at official Google Play store and similar sources. If you think that your device is infected, you can remove it by dragging the app on your top home screen and then using the uninstall control function.