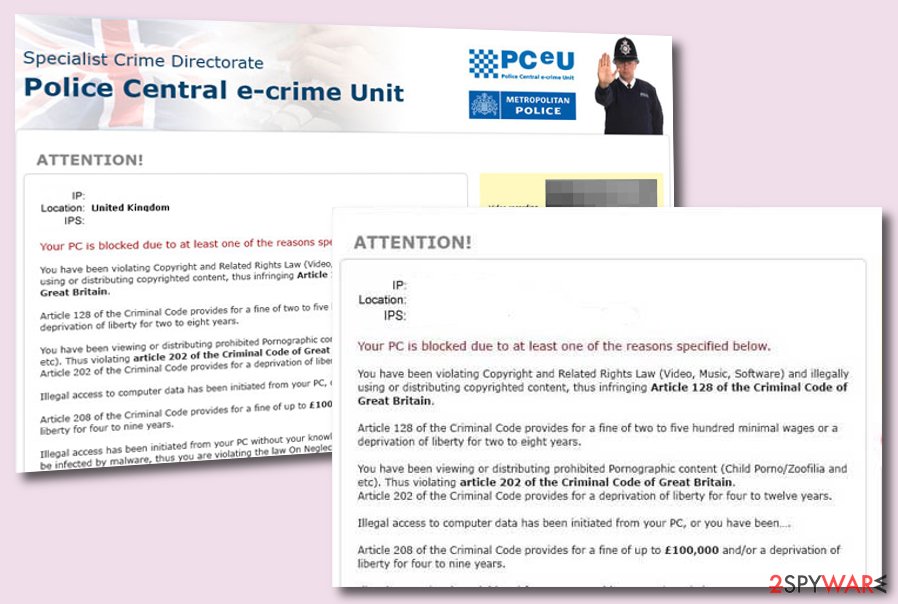 Police Central e-crime Unit virus (also called United Kingdom Police virus and PCeU virus) is a malicious scam[1] that blocks the computer screen and demands payments in Ukash or PaySafeCard. The fake message claims that the user has violated some Copyright and Related Rights Laws and now a 100-pound fee needs to be transferred, according to the Criminal Code. Nevertheless, Police Central e-crime Unit virus threatens users that they might get imprisoned from four to nine years for violating the laws.

The scam continues to urge for even bigger prices that start from 250 and end up with 8,000 pounds. Police Central e-crime Unit virus claims that the user has violated laws related to the distribution of copyrighted content, viewing or spreading pornographic material, etc. Hackers give 3 days to make the payment, otherwise, a criminal case will be opened against the user. Do not get frightened, it is just total nonsense.

There are multiple but very similar versions of Police Central e-crime Unit virus. All of them accuse users of violating some types of laws and demand to transfer fees to repay the guilt. Some of the malware even has access to the user's computer camera and shows a video recording the surroundings that are being filmed to plant even more fear. However, you should keep in mind that no type of law agency would urge for fees through such types of messages.

Police Central e-crime Unit virus, detected as Trojan:W32/Reveton, includes logos of Metropolitan police and the PCeU to give the scam message a look of legitimacy. In most cases, you will see a police officer on the upper right corner of the notification. Below you might encounter a video of you at your current position but do not rush to make the payment as this is just the malware developers trying to frighten you.

Even though Police Central e-crime Unit virus might really have access to your camera, this still does not mean that the provided message is true and you have to follow the demands. Nevertheless, criminals ask for Ukash and PaySafeCard payments that should ring a bell for you. People who want to use these types of payment methods are usually orientated in total transfer anonymity.

Police Central e-crime Unit virus can also provide your IP address, location (that will likely be Great Britain as hackers are targetting people from the UK), your operating system type, etc. Below, you will see the attention note claiming that your computer has been blocked due to some laws that you have violated and malicious activity that was found on your device.

Depending on the message, Police Central e-crime Unit virus might ask for different payments starting from 100 and ending up with 8,000 pounds that have to be transferred in 72 hours, 48 hours, or a similar time limit. Most of the time, hackers falsely accuse victims of distributing and watching pornographic content that is related to children pornography and zoophilia, illegally managing copyrighted material:

Nevertheless, Police Central e-crime Unit virus falsely claims that there has been illegal access to the information that is stored on your computer, some type of malware has been installed on the device, and spamming, illegal advertising activities were also tracked on your machine that might be a sign of a virus infection. Be sure that this is just another false claim.

The main target of Police Central e-crime Unit virus are people living in Great Britain, however, if the malware has landed on a computer or laptop that is located in the United States, the scam will adapt to the new country, change some of its writings, claim to come from America, and start demanding fines that are converted to dollars.

Police Central e-crime Unit virus is a form of malware that can be downloaded from various third-party websites, including torrenting networks. Also, you might start seeing this scam if some type of dangerous infection such as a Trojan virus has been included in your computer system. If this is the case, you can start experiencing additional activities such as frequent computer slowdowns, software crashes, high CPU usage, installation of unknown processes, etc.

However, you should know that Police Central e-crime Unit virus is just a scam and there have not been any laws violated and you do not need to pay the required fine. You should keep in mind that police departments or law agencies will not approach you in such a manner and try to get money from you in all ways possible. If you ever truly make a cybercrime, you will be contacted directly but definitely not through such types of messages.

If you have been dealing with this scam, do not complete any payments as the hacker will just run off with your money. Besides, you need to remove Police Central e-crime Unit virus from your infected computer system as soon as possible as the message might be a sign of a trojan[2] infection. To get rid of the malware, employ only reliable antimalware software. If you need to diminish the lock screen, try booting your device in Safe Mode with Networking.

Police Central e-crime Unit virus removal might require more than just deleting one component from the machine as the malware might have placed additional payload (various processes, files, and keys) that also need to be terminated. Nevertheless, if you have discovered some corrupted areas on your computer that showed up after the virus attack, you can try fixing the applied damage with the help of a repair tool such as Reimage Reimage Cleaner Intego.

Virus experts from NoVirus.uk[3] state that malware finds its way to the targeted devices by manipulating those locations that have the weakest security level and are easy to hack. For example, virus developers like to plant malicious payload on third-party downloading networks such as torrenting websites that are filled with game cracks, key generators, fake setups, movies, videos, updates, and other material that can help to pass the malware.

The best way to avoid receiving malware from torrenting websites is to just stop using them for your downloads. If you want to get some type of product or service, you should better apply for the downloading process on official websites. Furthermore, malware can get installed from infectious hyperlinks and advertisements that appear on unsecured secondary websites.

What you should do is be aware if your browser alerts that there is a deceptive website waiting ahead of you. Also, avoid stepping on every hyperlink and advert that you see, install AdBlock[4] to decrease the load of advertising that you receive daily. Furthermore, make sure that you have a reliable antivirus program operating on your computer system and make sure to update the antimalware regularly.

Police Central e-crime Unit virus removal should be performed as soon as you encounter the malware on your computer system. For this process, you will need to employ reliable automatical software, otherwise, it might be too difficult to complete on your own. If the virus has been blocking your computer screen, you can try diminishing these malicious changes with the help of Safe Mode with Networking function that is described below.

When you remove Police Central e-crime Unit virus from your Windows device, keep in mind that the malware might have brought some system compromisation. Check this speculation by downloading SpyHunter 5Combo Cleaner or Malwarebytes and running a full computer checkup process. If the results reveal any altered areas, you can try fixing things by employing a trustworthy repair program such as Reimage Reimage Cleaner Intego.

To diminish the lock screen and other malicious changes that were applied by the malware, you should reboot your Windows computer in Safe Mode with Networking as shown in the below-provided instructions

To deactivate the parasite and disable its activities, you should try opting for System Restore. For completing this task, check out the instructing steps that are provided below

Finally, you should always think about the protection of crypto-ransomwares. In order to protect your computer from Police Central e-crime Unit and other ransomwares, use a reputable anti-spyware, such as Reimage Reimage Cleaner Intego, SpyHunter 5Combo Cleaner or Malwarebytes

You can quickly scan the QR code with your mobile device and have Police Central e-crime Unit virus manual removal instructions right in your pocket.