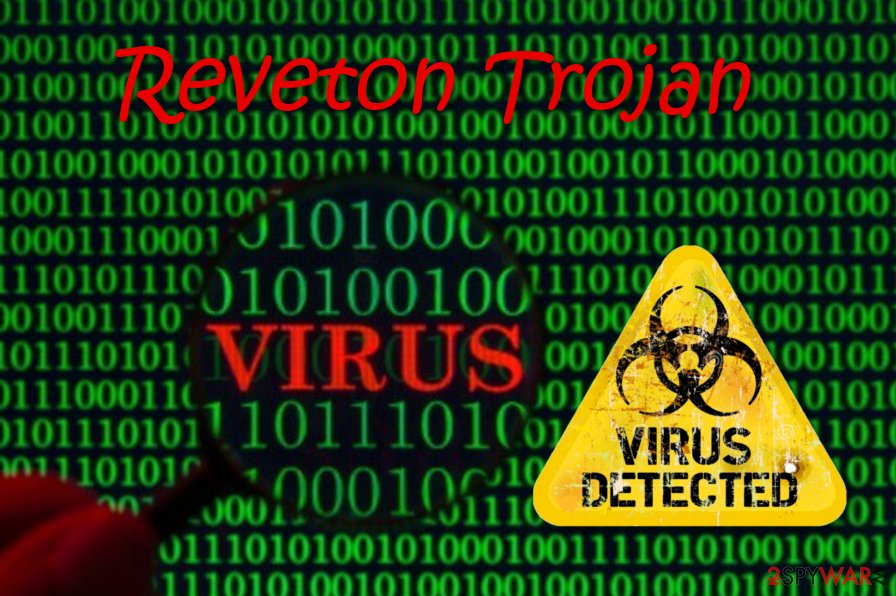 Reveton – a dangerous ransomware[1] application which is known to display a fake governmental notice to its victims. Typically, it claims that the user was caught while performing illegal actions on his/her computer. The virus also disables its victims from using the computer/mobile device properly and requires specific ransom for unblocking it. Also known as Trojan:Win32/Reveton, this harmful program has mostly been spreading around Europe (Spain, France, Turkey, Italy),[2] the US, and other world's regions. Typically, crooks behind Reveton ransomware claim that they are representing a particular law enforcement authority which is situated in the victim's location. After starting infecting Windows OS, it switched to mobile devices. While it is unknown how active this malware is at the moment of writing, hackers who had used it for generating the money are known to be sentenced.[3]

Reveton ransomware can be recognized as %USERPROFILE%\Start Menu\Programs\Startup\[reveton_filename].dll.lnk on Windows XP, and as %USERPROFILE%\AppData\Roaming\Microsoft\Windows\StartMenu\Programs\Startup\[reveton_filename]dll.lnk on Windows 7. As you can see from its location, it sets itself for launching once the PC is rebooted.

If you see signs showing you the Reveton, e.g. you cannot use your computer, you are urged to pay a particular price to unlock your computer screen, your program's don't work, your computer's desktop is covered by an unusual warning, do not rush to follow commands of cybercriminals. We recommend staying away from any contact with these crooks as their main aim is to swindle the money. Even if you transfer the demanded payment, there is no guarantee that the crooks will keep their promise and unlock your desktop.

Nevertheless, Reveton can also be filled with other damaging abilities that are familiar with other Trojan infections. For example, such viruses might perform various actions in the background, monitor internet activities, run software without the user's permission and even seek for stealing personal information that can be found in the infected computer.

If you overcome such infection, you need to remove Reveton as it is not just a Trojan that acts like a screen-locking ransomware-type virus. It can also install another malware on your computer or steal your personal data. For such purpose, we suggest using anti-malware tools such as Reimage Reimage Cleaner Intego. Make sure you get rid of the threat as soon as you spot the first symptoms to avoid damaging consequences.

Be quick to perform the Reveton removal. After you do so, make sure you take some precautionary measures in the future. Trojans[4] can come together with regular software, or the harmful payload can be dropped as a spam message to the victim's email box. Be careful while performing any actions on the Internet. 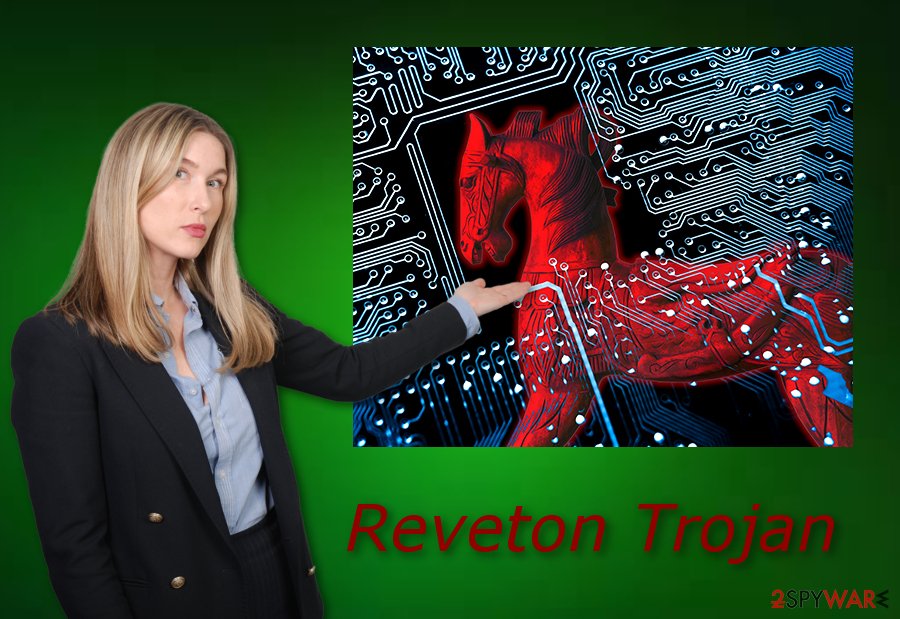 Reveton - a dangerous infection which urges ransom to unlock the desktop screen. However, it can also act as a typical trojan horse.

According to IT experts[5], various malware forms such as Trojans or ransomware-type viruses often distribute through spam messages. Crooks drop harmful payload straight to victims' email boxes. Virus-related content comes in the form of an attachment clipped to the phishing message or as a dubious link. If you click on such components and activate the damaging payload – you can get your computer infected with a serious infection.

Furthermore, various malware can spread widely throughout questionable web pages or software that is downloaded by using third-party installers. Avoid damaging consequences by installing strong antivirus protection. Make sure you keep the security tool always updated. If taken care of properly, this type of software will protect your system from various damaging components that might slip in the system secretly.

Get rid of Reveton without any delay

If you want to remove Reveton virus, you need to choose a professional anti-malware tool for such purpose. We recommend picking Reimage Reimage Cleaner Intego, SpyHunter 5Combo Cleaner, or Malwarebytes. These types of programs will let you deal with the infection as effectively as possible. However, if you are thinking about manual elimination, notice that such a method is not possible for those who do not have experience in such situations.

After you perform the Reveton Trojan removal, make sure you do not forget to do one more necessary step. You need to carry out some system backups to make sure that the cyber threat has vanished successfully and there are no more damaging components left. Take care of your computer in the future – pay attention while browsing the web, do not open dubious email attachments and regularly update your antivirus program.

Reboot your computer to Safe Mode with Networking by using these instructions:

Activate the System Restore feature and disable the virus. Follow these steps:

Finally, you should always think about the protection of crypto-ransomwares. In order to protect your computer from Reveton Trojan and other ransomwares, use a reputable anti-spyware, such as Reimage Reimage Cleaner Intego, SpyHunter 5Combo Cleaner or Malwarebytes

You can quickly scan the QR code with your mobile device and have Reveton Trojan manual removal instructions right in your pocket.