M4N1F3STO fakes ransomware attack and tries to steal your money

M4N1F3STO virus is one of those nasty screenlocker-type [1] viruses that are designed to imitate ransomware attacks and swindle users out of their money by selling them fake data decryption keys. For those unfamiliar with leet speak [2], the virus title decodes as MANIFESTO. The bogus ransomware usually lack a lot of the malicious functionalities that the real ones possess. For instance, M4N1F3STO malware does not actually encrypt the infected computer files but merely drops a threatening lock screen whenever the victim attempts to launch the system. This lock screen obstructs the victim from booting the system properly and accessing the data stored on the device. Consequently, the victims remain unaware of the fact that in reality, no encryption process ever took place and that the extortionists are only playing tricks to get them pay for the non-existent decryption tools. You can see the content of the lock screen message below:

I want to play a game with you. Let me explain the rules:
Your personal files are being deleted. Your photos, videos, documents, etc…
But, don’t worry! It will only happen if you don’t comply.
However I’ve already encrypted your personal files, so you cannot access therm.
Every hour I select some of them to delete permanently,
therefore I won’t be able to access them, either.
Are you familiar with the concept of exponential growth? Let me help you out.
It starts out slowly then increases rapidly.
During the first 24 hour you will only lose a few files,
the second day a few hundred, the third day a few thousand, and so on,
If you turn off your computer or try to close me, when i start the next time
you will het 1000 files deleted as punishment.
Yes you will want me to start next time, since I am the only one that
is capable to decrypt your personal data for you.
Now, let’s start and enjoy our little game together!”
1GmGBH9ra2dqA8CgRg8a8Rngx4qHb2hLDW
Send 0,3 bitcoins to this adress to unlock your Pc with your email adress.
Your can purchase bitcoins from localbitcoins

Luckily, the threats in this note remain in their written form, and no actual data destruction takes place, even if the user refuses to follow the extortionists’ rules. In fact, this is exactly what you should do if you ever in such a situation — remove M4N1F3STO virus from your device as soon as possible. We suggest doing that with the help of sophisticated malware-fighting tools, such as Reimage Reimage Cleaner Intego. 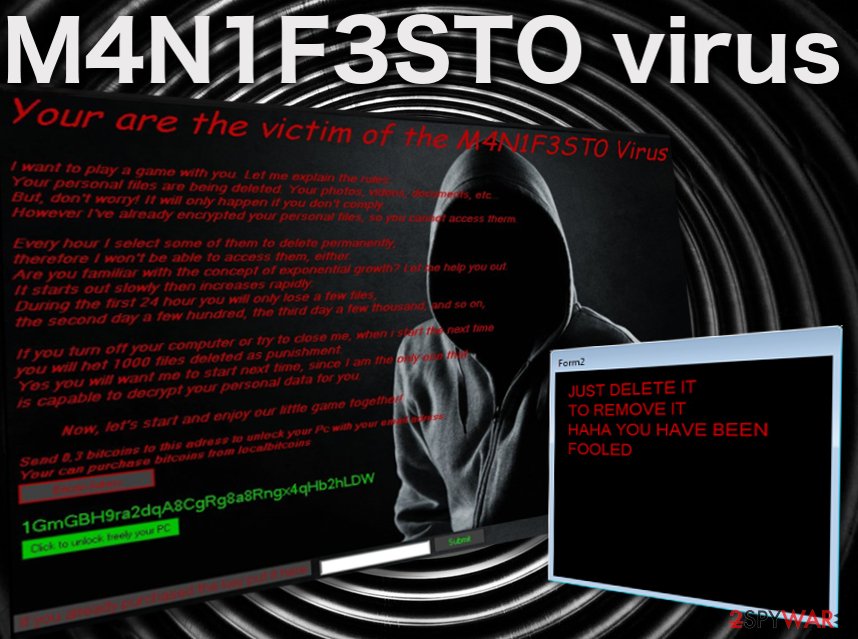 At this point, you might be wondering, what should you do about the lock screen. How do you scan your PC with an antivirus utility when you cannot access your desktop or any programs installed on the computer? The virus analysts have found a way to bypass this obstacle already. They have examined the program’s source code and found that the M4N1F3STO lockscreen removal code can be extracted from the virus executable. Thus, you don’t have to pay the demanded 0.3 Bitcoin [3] for the supposed data decryption. Instead, you can access your desktop and take care of the M4N1F3STO removal.

How does this malware attack computers?

There is currently no information about how MANIFESTO attacks computers. But we can presume that it either spreads via malicious spam email attachments [4], corrupt ads or gets downloaded on the computer disguised as software updates or legitimate applications. Nevertheless, the files found on the computer after the attack lead us to believe that the virus arrives on the computer mostly through spam. The malicious WindowsApplication1.exe and Receipt.exe files feature titles inconspicuous enough to be downloaded by the regular users without suspecting about their malicious nature [5]. This only proves how easily malware like M4N1F3STO can enter computer. Hence, any content that may potentially reach our computers should be carefully investigated and examined with software specialized for malware detection.

What is the best M4N1F3STO removal approach?

In case your device has been affected by this fraudulent ransomware-imitating infection, don’t for hesitate for a second and remove M4N1F3STO virus from your computer. To do that, you will first have to terminate the lock screen and only then you will be able to access the antivirus tool required for the virus extermination. If our previously-indicated lock screens termination code does not work, check out a couple of alternative lockscreen removal instructions below. Finally, when every obstacle is eliminated, you can proceed with the M4N1F3STO removal.

Enter the unlock code provided in this post to the box next to the “Submit” button on the lock screen. Then, run the system scan immediately and clear the Windows Registry.

If you manage to enter your browser through the links provided on the lock screen:

You can quickly scan the QR code with your mobile device and have M4N1F3STO virus manual removal instructions right in your pocket.