What is PC Fix Speed?

PC Fix Speed (powered by Crawler Group) is a system optimization program, which promises to increase PC speed and repair registry errors. However, in reality, we can hardly find an optimization program, which could fix ALL registry errors in the computer. Typically, they detect only a small amount of outdated registry entries that can hardly improve computer’s speed after eliminating them from the system. Those who do not know how Windows registry works should be aware that this is a database, which is filled with thousands of different entries that belong to different programs. Some of them might be outdated because they were mistakenly left on the system when uninstalling programs from the computer.

After PC Fix Speed scans the registry for these outdated entries, it reports about useless entries and offers to remove them. However, in reality, it should eliminate thousands of different entries to have a visible effect on your computer’s speed. So, no matter that it is not a virus or malware, it seems that PC Fix Speed only tries to frighten the PC user and create an illusion of a need to buy the licensed version of PC Fix Speed. If you wish to scan your computer with a reliable computer security tool, you should download Reimage Reimage Cleaner Intego instead of some never-heard-of PC optimization app. It is a known and trustworthy spyware and malware removal tool, which can delete thousands of various computer threats. 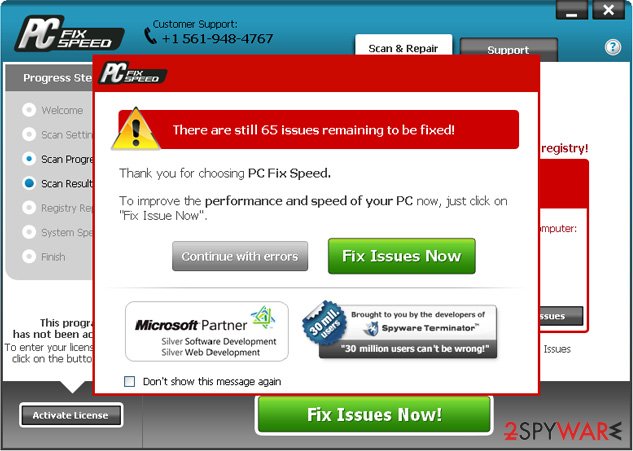 How can PC Fix Speed appear on my computer?

PC Fix Speed can appear on your computer after downloading it from its official website. However, you should also beware that many users reported about discovering this program on their computers out of nowhere. In this case, you should know that this program can also spread in a bundle of freeware and shareware as a ‘suggested download.’ Sadly, in most of the cases, you are not going to be told about such optional apps attached to your preferred program. To prevent such stealthy infiltration, you should always pay attention to freeware’s components list and uncheck suggestions to install such unwanted applications like this one. You can find the agreements to install optional software by choosing Advanced or Custom installation mode whenever you install free software on your computer. Besides, this application can also get inside the system after you click on a misleading alert, which reports about PC’s problems related to its speed. Mostly, these pop-up notifications appear on illegal sites, such as gambling sites and similar. Once it gets inside, PC Fix Speed starts displaying continuous alerts that mostly claim:

We recommend removing errors by clicking on the Remove Now! button.

Remember, these alerts are NOT misleading or malicious, but they report about errors that can hardly improve your computer’s speed. Besides, they may also seek to convince you to purchase licensed PC Fix Speed’s version. That is why we recommend ignoring these and similar messages and eliminating PC Fix Speed from the system. For that, you can follow the removal guide that we have provided on the next page.

How to remove PC Fix Speed?

To get rid of the trial version of PC Fix Speed, you can follow this guide:

If this failed to help you, you should simply download Reimage Reimage Cleaner Intego (if you are a Windows user) or Webroot SecureAnywhere AntiVirus (if you are a Mac user) and run a full system scan. It will find unknown files and remove them automatically.

You can quickly scan the QR code with your mobile device and have PC Fix Speed manual removal instructions right in your pocket.