Be careful when you choose which System tools to use

System tools are applications that possess certain functionality and can be used for implementing different tasks. People download them in the hopes of improving computer performance and security,  getting a better experience while browsing the Internet, or simply fixing specific PC errors.

While most of the system tools can be a great help, some might not be as good as they claim to be and might be used as a simple money making mechanism. When it comes to the latter, such app developers do not emphasize user experience or even usefulness of of the application as important, and only seek to gain financial benefits in one way or another. What is worse, that some system tools can be straight out malicious – replicate malware behavior for money extortion purposes.

Malicious tools often use official websites where they can also be obtained from. Such sites are commonly made very attractive and possess certain aspects that are coming from a field of social engineering – they would use fake Facebook profiles to show fake but positive comments or embed names of high-profile tech companies or media outlets in order to seem more legitimate.

Alternatively, users may also acquire potentially unwanted programs while installing other free programs downloaded from the internet. The bundle typically includes a desired application (typically, harmless) and optional installs that users often fail to decline while rushing through installation steps.

There are two main categories that we can distinguish when it comes to malicious system tools (you can find more detailed descriptions below):

Another virus-like behavior that malicious system tools possess is persistence – uninstallation might become a total nightmare, as the uninstaller might not be present or the program might be missing from the installed application list. Besides, even after termination, some system tools might leave traces like browser changes, registry entries, and other components that will keep disturbing users.

Types of malicious system tools that should be avoided

Unfair programs, which are categorized as “system tools”, shouldn't be downloaded intentionally. Even if they don't pose harm to your useful files and similar data, they can cause unwanted activity. Here are the most popular methods used for the distribution of system tools:

As evident, there are two main operating systems that are used worldwide – Windows and macOS/Mac OS X. While the latter is a little less popular overall, malware for the platform has been actively being developed in the recent years, including the system optimizers that show false-positive scan results.

Nevertheless, Windows remains the most popular operating system, so there are more viruses developed for the platform. Below are the most common fake system optimizers and other malicious system tools for Windows OS:

Driver Tonic is a potentially unwanted application that usually gets installed together with other software, although users can also install it intentionally on the official website. According to its developers, the app can automatically update all the drivers needed to game without problems, clean the registry and protect from malicious websites on Google Chrome, Internet Explorer, Mozilla Firefox, and other browsers.

Driver Tonic claims to update your drivers on time by using comprehensive database. However, it can install itself without the permission and install wrong drivers, wasting your time and money

Driver Tonic claims to use a database of 200,000 drivers that can be updated on all systems that the program is installed automatically. However, the app might start showing you fake scan results, indicating multiple outdated drivers, and even install the wrong ones. Corrupt of inappropriate drivers might destroy the operation of multiple Windows parts. The same applies to the Windows registry – the system part that should rarely be touched in the first place.

Besides, Driver Tonic is also recognized as a potentially unwanted program by multiple AV vendors – it could harm your PC. Therefore, never buy a full version of the program and rather use trusted utilities that would help you install the required drivers – Nvidia Experience. Besides, drivers can be downloaded from the manufacturer website or via the Device Manager.

Web Companion by Lavasoft is one of the most controversial and widely-spread potentially unwanted programs that are often offered as an optional component inside bundled software packages. The feature is exceptionally prevalent, as many users complained about the tool appearing seemingly out of nowhere, even after installing new programs carefully.

Web Companion uses deceptive techniques for its distribution, namely deceptive installers that do not disclose its presence in the first place

Web Companion is suggested as a useful application that can secure the web browsing sessions by preventing the installation of dangerous adware programs and other unwanted apps. Ironically, this system tools act more like adware and a potentially unwanted program itself. We suggest you remove Web Companion as soon as you notice it on your computer. You should also scan your computer with anti-virus software for best results.

My System Mechanic is a classic fake system optimizer that identical to hundreds of other similar software that has been branded as scareware by security researchers, as well as the community. The dubious app was available to download from its official website, although the site is now shut down. Nevertheless, users can still install it together with freeware and shareware apps from third-party sites.

Upon installation, System Mechanic performs an automatic system scan which shows hundreds of issues. The app developers intentionally use red color for displaying the problems and mark them as “high severity level.” The threats are distinguished into several categories:

In reality, most of the flagged issues are harmless registry entries related to Google or other legitimate services. Besides, cookies can hardly be considered a security threat, although this program will happily introduce them as such. Additionally, My System Mechanic might delete vital registry parts that might corrupt the operation of the Windows system.

The goal of fake system optimizers like My System Mechanic is to make users believe that their PCs are in deep trouble and need fixing. However, to do that, they need to pay for the registered version of the app – and that is how developers make money. Do not pay for the bogus System Mechanic tool and get rid of it as soon as possible, before it manages to damage your OS.

Macs have been targeted by scareware and similar apps for awhile

For many years, users thought that Mac viruses do not exist and that their system is completely safe from the online dangers. While it might have been the case when macOS was not as popular, cybercriminals always found ways to bypass security measures implemented by Apple.

However, malware is not the only threat to Mac users. Most recently, fake system optimizers and adware have been targeting the platform, and many unwanted apps emerged. Check out the most notorious of such applications:

Advanced Mac Cleaner claims that it can improve the speed, clean junk files, and optimize the computer for a smooth performance. However, the application is one of the most known apps among cybersecurity community as a scareware app that tries to claim users' money by showing them fake scan results.

Just as other fake system optimizers, Advanced Mac Cleaner is usually installed along with other software or can be promoted via fake Adobe Flash updates or suspicious ads on various websites. It is worth noting that the threat is often promoted via the notorious “Your system is infected with 3 viruses!” scam sites. The worst part is that it was also involved in the malicious Shlayer Trojan campaign that installed apps without permission, redirected to dangerous sites, and disabled the Gatekeeper.

As soon as Advanced Mac Cleaner is installed, the PUP performs a fake scan that immediately shows thousands of detected issues, including duplicate files, cache files, virus infections, and other threats. These issues are obviously fake, and should not be paid attention to. However, the presence of Advanced Mac Cleaner might indicate more severe malware existence – do a scan with a reputable security tool.

TuneupMyMac claims to be certified by a certification body AppEsteem. However, the app is one of many fake system tools that will not only fail to do what it promises but might also damage the operation of a healthy macOS/Mac OS X. Nevertheless, Systweak Software, its developer, claims that the tool can clean the allegedly damaged Mac in just one click.

As soon as TuneupMyMac is installed, it will perform an alleged system scan and will display a variety of issues related to system logs, startup apps, duplicates, and many others. It is evident that the issues are fake and should be ignored. Nevertheless, the application will continuously pressure users to buy its full version and will not stop until it is removed. Nevertheless, those who want to remove TuneupMyMac might be surprised, as the app is almost impossible to shut down and to uninstall it becomes difficult.

In general, users who run newest Macs with the SSD installed should never need optimization software in the first place, as promises of faster machine speeds might result in money loss and the compromised operation of the OS.

Mac Tonic can be downloaded from its official website, although users who found the tool on their Macs do not remember visiting it. This is because the dubious system optimizer usually slips in during the installation of freeware acquired from third-party sites or with fake Flash/Shockwave updates. This is another reason to limit the downloads to only official sources, such as the App Store or Amazon. It is also worth noticing that Google now flags the official website of Mac Tonic as malicious that contains “harmful programs” – the warning can hardly be missed as it is displayed on the full browser tab.

Mac Tonic installs itself without permission and spreads its components all over the macOS. This is what makes the removal of the application so tricky. Quite often, experts recommend getting rid of the program by scanning the computer with anti-malware software instead. Finally, paying for the licensed version of Mac Tonic makes no sense, so please make sure you never do that and delete the app as soon as possible. Mac Tonic stems from the same developers as Driver Tonic, and does not meet the expectations of many users

Removal methods that can be used for eliminating system tools

In most of the cases, people decide to remove system tools because they stop using them or simply want to free up space on their hard disk. However, you can also decide that you want to get rid of one of such programs after noticing its unwanted activity on your computer. As we have mentioned, some part of system tools is considered malicious and should be removed from the system. Here are two different options that you can choose for doing that:

Manual removal of system tools. If you have a useless system tool on your computer, you can uninstall it manually. For that, you should use “Programs and Features” by selecting “Start”; “Control Panel” and “Programs”. Once you see a program that you don't need, select “Uninstall”.

Automatic removal method for eliminating malicious system tools. If you think that you are dealing with the malicious (or suspicious) version of a system tool, you should select Automatic removal option. ReimageIntego or SpyHunter 5Combo Cleaner will help you to make sure that there are no unwanted components that are related to your system tool on your computer anymore. 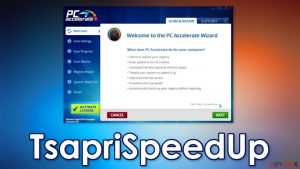 TsapriSpeedUp is a potentially unwanted program that is disguised as a system optimization tool.
System tools Viruses   December 28, 2021 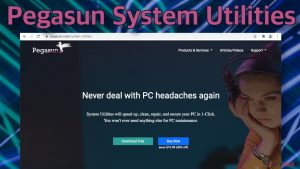 Pegasun System Utilities says that it will maximize your PC performance among many other things.
System tools Viruses   October 27, 2021 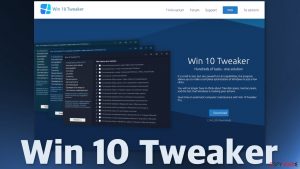 Win 10 Tweaker was flagged by 30 security vendors as malicious, so can be considered a PUP.
System tools Viruses   October 07, 2021