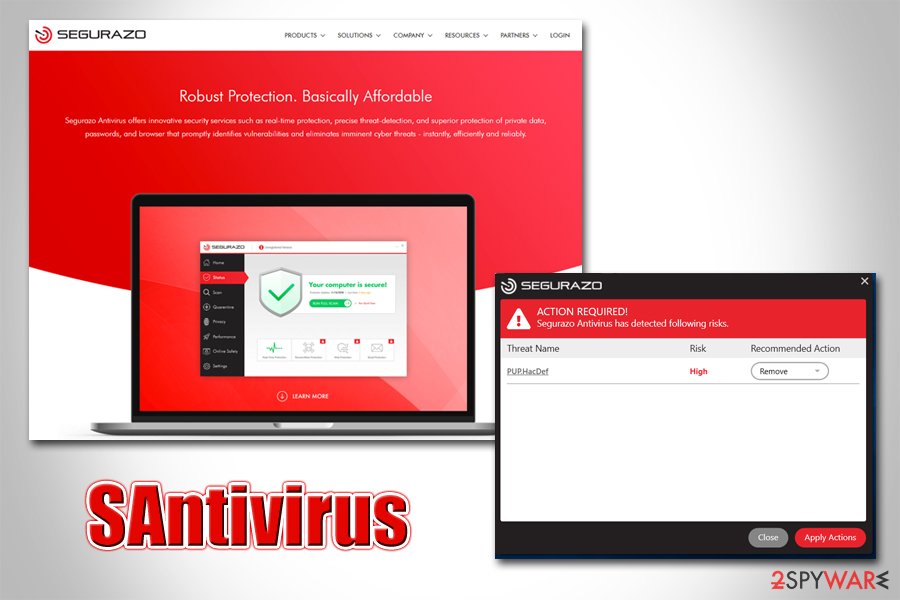 SAntivirus, otherwise known as Segurazo, is an application that is presented as a useful tool that can protect users from all types of malware in real-time, solve all kinds of software-related issues, boost PC speed, and optimize the various items of the system. However, this app has a poor reputation among users and the infosec community, as it is mainly distributed via a deceptive tactic known as bundling, and is known to be showing fake scan results in order to make users purchase a licensed version of the program. Additionally, many claimed that they had trouble with SAntivirus removal,[1] as it would modify the local group policy settings (by using SeLoadDriverPrivilege command)[2] to escalate privileges and then establish persistence.

At a glance, some users may think that SAntivirus is a decent anti-virus software that can also optimize their PC, as it uses a neat design with and UI, which is easy to navigate. It claims to include the following features:

However, under its design and well-presented features, SAntivirus hides traits that are more common to malware rather than to programs that protect against it.

First of all, most of the users who are dealing with SAntivirus never installed it intentionally (even though it can be downloaded on its official website), as it is spread with the help of various unfair techniques, including software bundles, fake update prompts and deceptive ads.

Once installed on the system, SAntivirus instantaneously performs a full system scan. While it is a common procedure for all anti-malware tools, what is not common is the results that it brings. Because the app shows exaggerated scan results (for example, it may mark Google-related cookies as a medium severity threat, which is absolutely not correct), users may think that their computers are in a much worse state than they actually are.

In case users press the “Remove all issues” button, they will be directed to a payment page, asking them to purchase a full version of the SAntivirus app. We highly advise you not paying for this useless software, as you will simply waste your money – considering its deceptive marketing techniques and misleading scan results, it can hardly be trusted as a security tool for your computer. 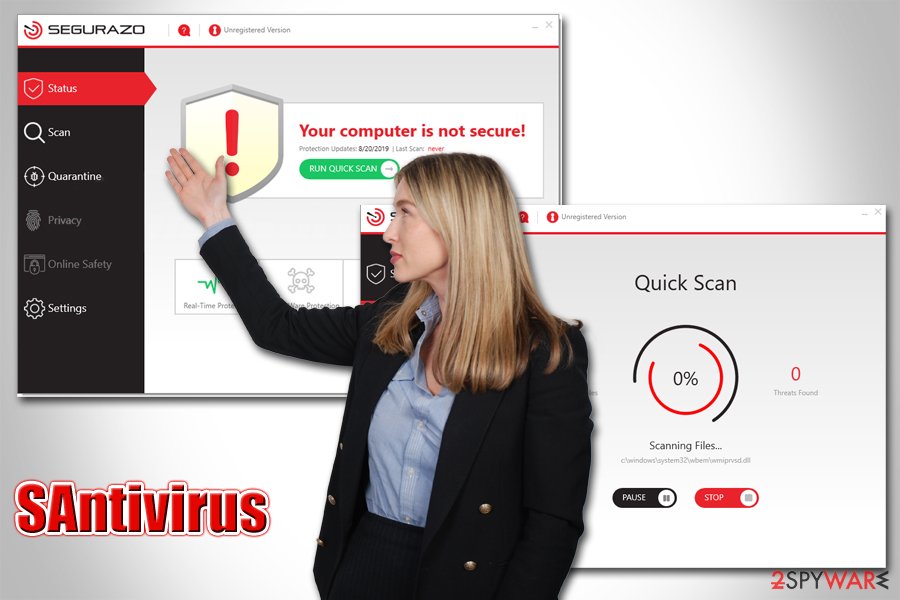 Instead, you should rely on applications that are reliable and do not mislead users on every step. If you need a system optimization tool that could also fix various Windows issues, we suggest Reimage Reimage Cleaner Intego. Additionally, you should also not forget about your computer's defenses – employ anti-malware like SpyHunter 5Combo Cleaner or Malwarebytes to remove SAntivirus and protect your computer from other threats in the future.

Potentially unwanted programs are called so for a reason, although they are generally “unwanted” by users. If the application is classified as a PUP, you should better stay away from it, as it uses multiple deceptive techniques in order to reach its goal – monetization. And, while earning money for the provided product is reasonable, giving false advertisements and lying about its functionality is not – users simply feel tricked and betrayed, although they usually cannot bring their money back anymore, as they willingly paid for the app.

Therefore, it is best to stay away from PUPs in the first place, as they might not only make you pay for useless services, but also compromise your online security by changing web browser settings and leading to suspicious websites, or tracking your online activities in the background.

To ensure that you stay away from potentially unwanted and malicious apps, follow these simple tips provided by security experts:[3]

Uninstall SAntivirus with the help of these instructions

Many users said that SAntivirus removal was very difficult – they said they tried deleting the files manually within the Program Files folder but the access was denied. Nevertheless, you may try to eliminate the PUP by using manual termination steps as per instructions below. 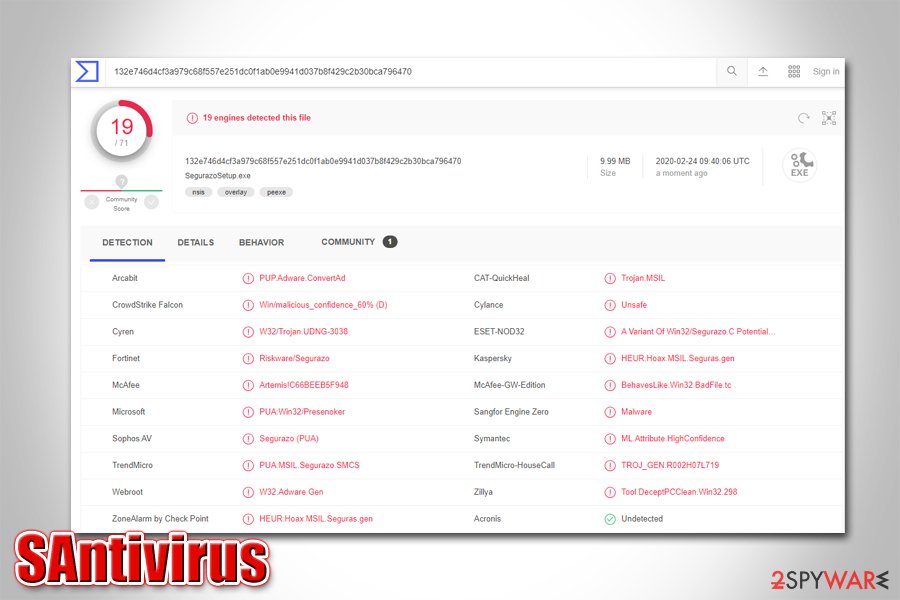 As we mentioned above, SAntivirus virus engages in various system modifications, such as Windows registry change, alternation of local group policy, and performs changes other critical Windows settings. As a result, you might not be able to remove SAntivirus manually, and you will need some help from automatic removal software.

For that, you should download and install anti-malware that recognizes the PUP. Unlike when trying to get rid of the threat yourself, security software can detect all the malicious files within the system and remove the privileges Segurazo established for itself during the installation process.

Your opinion regarding SAntivirus Cancel reply

You can quickly scan the QR code with your mobile device and have SAntivirus manual removal instructions right in your pocket.