Misleading content is a term used to describe a heading or the whole article that was created to misinform or deceive readers/watchers merely. In most cases, the primary purpose of such content is to influence the reader's point of view, form an opinion, cause confusion, discussion, or even create profit for the publisher and other related parties. Fake news is a popular way for publishers to make a profit by driving web traffic to their site.

The misleading content does not necessarily cover the entire article. The article is considered misleading if only some facts are invented, the article is using manipulative truth or hiding the truth intentionally. 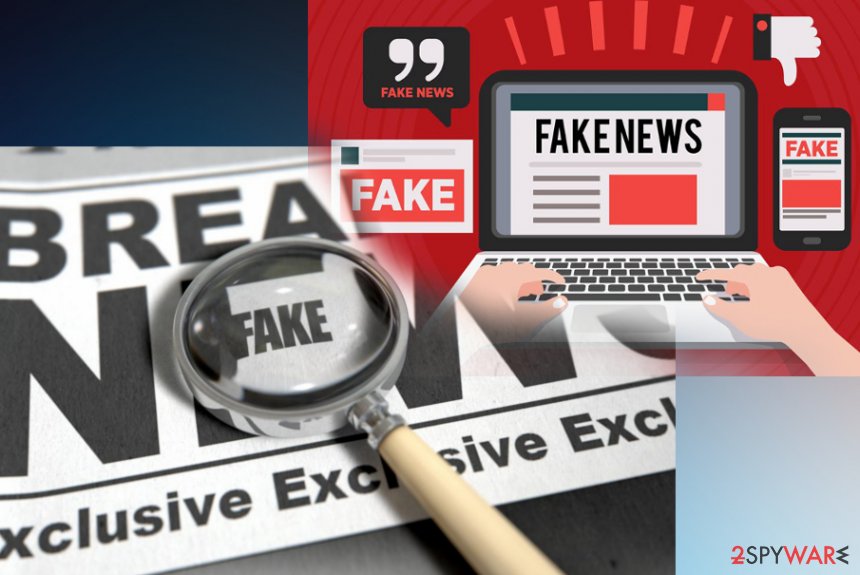 Misleading content is a term used to describe false information spreading with the help of misleading headlines.

To get views, these fake news typically use clickbait titles and misleading content. Publishers can also put a logo, a well-known name or other features that are designed to catch the victim's attention intentionally.

There are three main factors of the misleading content that can be found in every fake news story.:

The misleading content reached its peak after the social media became more popular. Nowadays, traditional media is not the primary place where people get their news from. Journalists have strict rules to follow when creating content, but social media platforms have no such requirements and can be used to spread misleading content without regulations, editorial rules and standards. As a result, news sources changed the way how they present themselves and got an ability to present unreliable content.[1]

The fake content has become especially popular after the overload of information from social media sites has emerged. It is easy to contribute to fake news and shady stories when you can click “like” or “share” button with only one click. Social media plays a huge part in such behavior and increases the possibility of going viral for something that is not necessarily is true.[2]

Cickbait is the method when the publisher is using the eye-catching title to drive visitors to various platforms, like YouTube, Facebook, Instagram, Linkedin or own site. Traditional news sources have also started using the technique based on fabricating article headers filled with misinformation.

In most of the cases, Cickbait helps to increase advertising revenue for particular websites or third-party advertisers. However, it has also been designed to form opinions and make people take needed decisions. Attention-grabbing[3] headlines typically lead to inaccurate information. Often, the main article is about different things than the header itself. 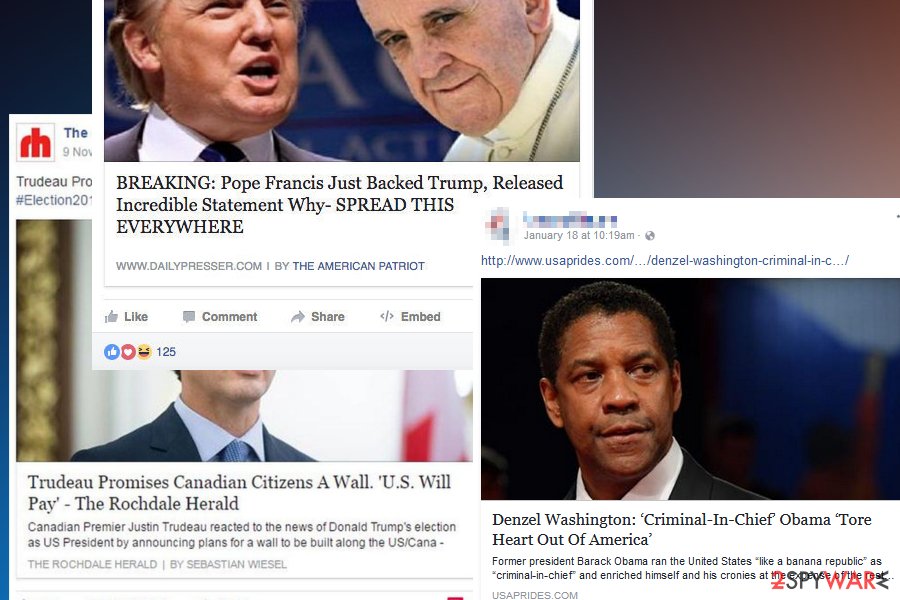 Propaganda is designed to mislead audiences and promote biased opinions.[4] It is used to form a particular view and set the agenda.[5] In simple words, propaganda is misleading content that promotes and publicizes a political point of view to influence an audience towards certain beliefs. Propaganda encourages particular perception and produces an emotional response, in most cases. This is why it works.

When it comes to news content filled with propaganda, politics goes right to the top. During elections, when different party members go to social media to express their positions and talk to people, the distribution of misleading content reaches its peak.

Entertainment is the main purpose of media, especially when it comes to social media and non-traditional outlets, portals, pop-culture websites. Misleading content can also be published to entertain people. One of the ways how it is done is making a parody of the person/ story/ event.

Parody (or satire) is a tool used to comment or criticize the particular work that initially becomes a subject of this created parody. This is a comedic commentary that requires a specific imitation. Characteristic, style of the writer, artist, or speaker can be exaggerated for the comic effect.

Nevertheless, parody is the type of misleading content and can also be considered an antidote for it.[6] Satire/parody creates double-voiced discourse and sets the attention to the intertextuality of the story. This is used by influencers, new media outlets more than in traditional media, journalism-based platforms. 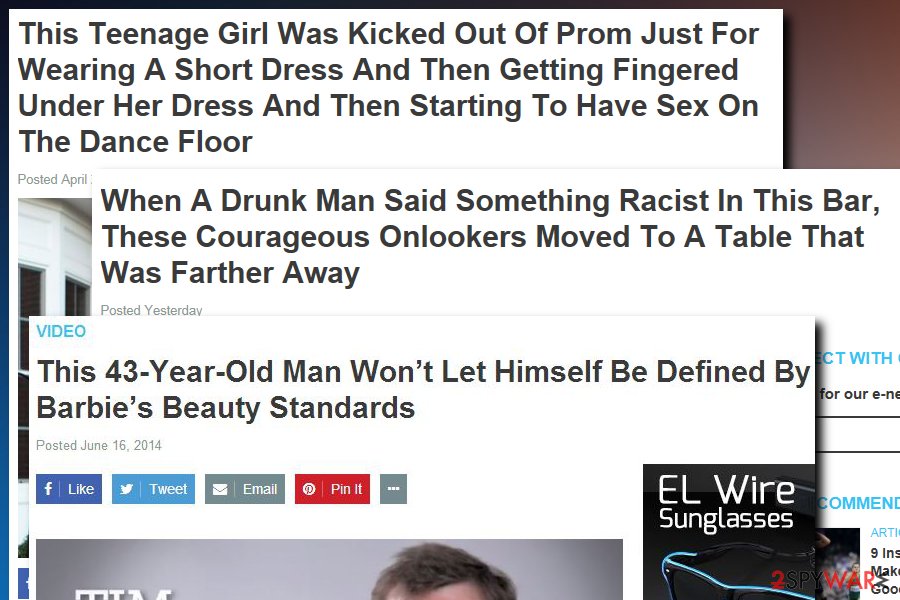 Misleading headings is the type of misleading content that has mostly been used on social media to make something go viral. Social media posts can look sensational, and the message spreads quickly across the newsfeed. However, catchy headings can also be found on traditional media to generate views on the required article which can be found completely different after checking.

Also, misleading headlines can be written in a certain style or way to create a different meaning, so people expect to read about a particular issue and outcome, but get disappointed once they open the full story.

The quick reaction is a feature of a good journalist, and during this time where everything happens fast, the faster the article comes out, the better. However, speed is not the most important thing when it comes to quality. When the writer is trying to be the first that publishes a sure story, fact-checking comes to the second plan. This is now audiences get mislead, and stories full of false information comes out.

Sloppy journalism has mostly been used during important elections and other political events. Such fake news creates confusion or can sometimes ruin the reputation of the particular person and media outlet. One story with facts that are not legitimate can create a vicious circle of fake news stories coming out. Some sources can sometimes spread such information to create confusion and take advantage of the reactions from the audience. 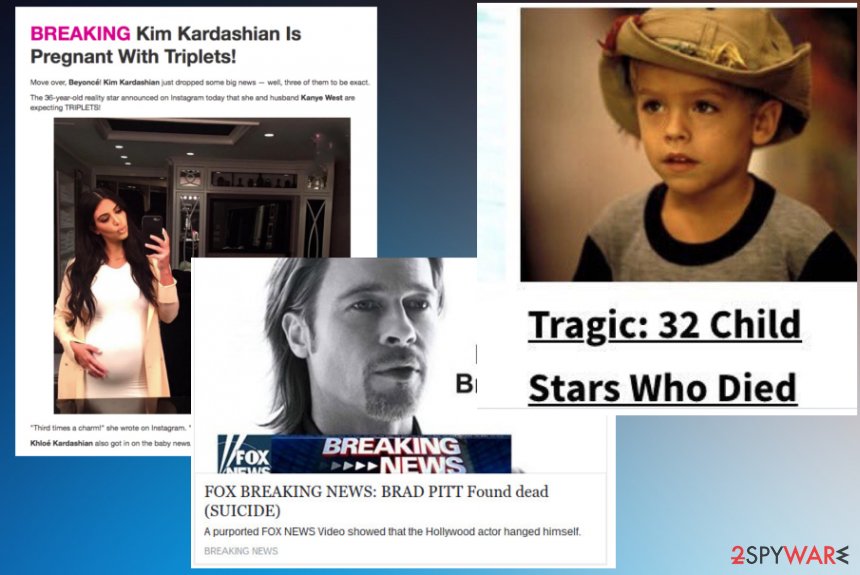 News are using clickbait with celebrity photos and fake headlines to drive visitors.

The professional journalist needs to be unbiased, and stories that get published to the public have requirements unless you are the person that thrives on creating personalized content, filled with your opinion.[7] Also, it is known that particular audiences have specific opinion or biases when it comes to themes like politics, health, and so on. This is the method that gets employed to slant the news story to a needed place.

Also, reporters can choose events and news from the massive selection and post about the particular issues that should be interesting for the audience based on perceived bias. Newsfeeds often get filled with the content that the audience should like based on the personalized searches and the data that gets recorded using tracking cookies. 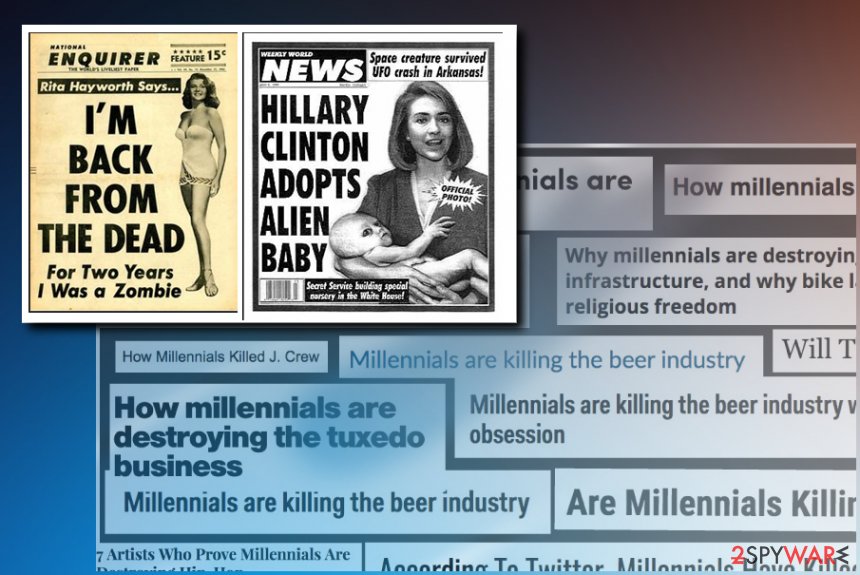 Even though the information is extremely exaggerated, people tend to click when they see particular keywords or the content is based on their biases.

How to spot and avoid misleading content and fake news

Nowadays, media is consumed, not observed, and it takes hours or even minutes from creating the article to sharing, liking, and commenting on it. Also, the message can be seen by millions of people in a matter of seconds, thanks to the internet. This service is hugely personalized due to the algorithms of Facebook and Google that tailor services based on each user, his or her searching online habits. This filter bubble often means that you are isolated from different views and opinions since you get exposed to content that reflects your likes, views, and beliefs.

These are the skills and habits you should build as a cautious internet user: 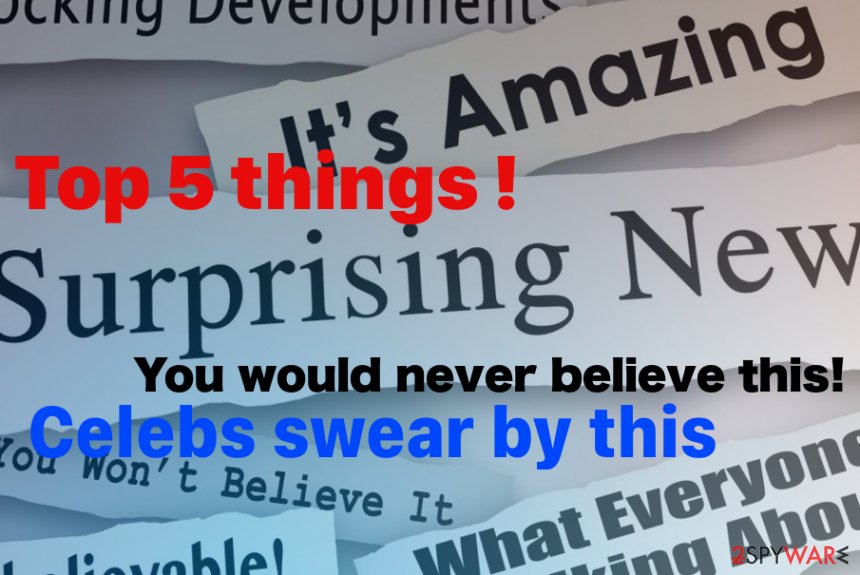 People on social media see exclamation marks, caps and they automatically click. However, these headlines often lead to useless articles about nothing.

There are many tools and measures that help to flag misleading content and report outlets that publish fraudulent content. Media literacy and developing skills become even more important in this age of mass media.[8] Critical thinking is the characteristic that people need to develop from an early age. Especially when cybersecurity, internet, and social media consumes the most significant part of your lives. This is why certain websites that check facts get released by particular media organizations like BBC, Channel 4.