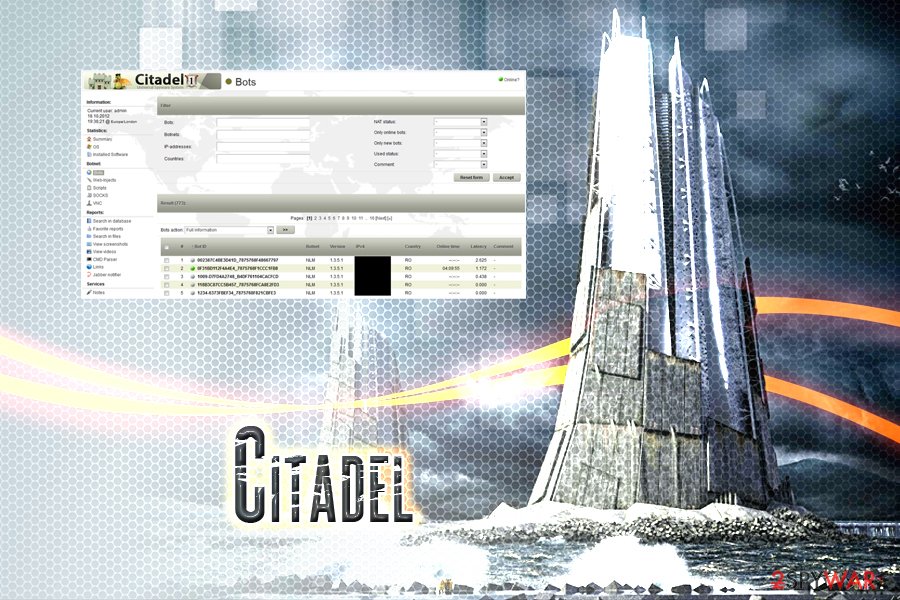 Citadel trojan is a data-stealing malware that was first spotted in the wild back in 2011 and was based on the Zeus virus. Its impressive keylogging and evasion capabilities allowed its developer Mark Vartanyan, also known as “Kolypto,” and his affiliates to harvest the login credentials from the most popular password managers, including Keepass or Password Safe.

During its successful years of operation, Citadel trojan managed to infect over 11 million computers worldwide, which resulted in $500 million worth of damage to users.[1] Fortunately, with the help of combined efforts of the FBI and Microsoft, the operator was extradited to the United States in March 2017 to face criminal charges related to Citadel malware and sentenced to five years in federal prison later that year.[2]

Citadel trojan was offered on the underground forums for years and was one of the first viruses that were used for malware-as-a-service (MaaS) scheme. The affiliates used a variety of infection methods, such as Blackhole EK,[3] to infect users with a malicious payload and then included the computer network into a botnet, further proliferating malware.

While the developer Kolypto is already behind bars, it does not mean that Citadel virus is gone forever, mainly because it was operating the malware-as-a-service program. Therefore, users should beware of older threats, as the presence of a trojan can result in money loss, installation of other malicious software, or even identity theft.

Soon after the distribution of Citadel virus seized in 2016, a new version based on it was released – Atmos.[4] It was mainly developed to perform targeted attacks against banks. However, it later turned out that the malware was also used to drop TeslaCrypt ransomware,[5] initially infecting users via malicious web injects.

What's so special about Citadel malware is that it is capable of entering the machines and idling for months, meaning that no security solutions can detect it during that time. However, the updated versions of security applications should be able to help with Citadel virus removal and prevention. 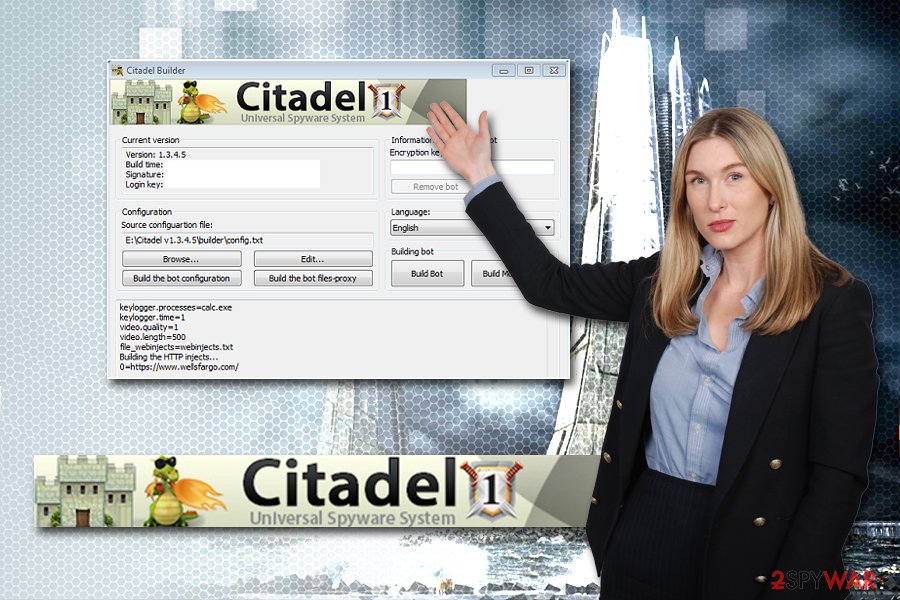 Citadel virus is a trojan that is capable of evading detection, stealing sensitive user data and preventing them from visiting security websites

The complex nature of the trojan requires users to be extremely careful when browsing the internet, as the infection can come when its least expected. Citadel virus might be delivered using a variety of methods, so the prevalence is guaranteed.

We recommend using security solutions such as ReimageIntego and SpyHunter 5Combo Cleaner in order to terminate the malicious threat and restore the computer to a working state. Remember, trojans are usually silent and do not show any signs or symptoms, so it vital to scan your device with anti-malware on a regular basis.

Unlike potentially unwanted programs that are considered less harmful, various malware, including ransomware, and banking trojans are usually operated by a sophisticated criminal group. Therefore, the distribution methods of such threats are usually much more complex and advanced – it ensures the benefit of infecting millions of users. Here are a few examples of malware distribution methods:

Let's make it clear: having a comprehensive anti-malware software installed is one of the major steps towards infection prevention. However, it is not enough just to be safe online.

You should also make sure you update your operating system along with all the installed applications as soon as new security patches are deployed. Updates can fix security flaws, which would consequently stop the trigger of the exploit, which would otherwise install malware automatically as soon as you enter the compromised site.

Additionally, you should avoid torrent and crack sites that offer illegal software – these are full of malicious software and should not be tampered with.

Remove Citadel banking trojan and prevent the intrusion of other malware

Besides Citadel's capability of stealing credentials, credit card details, and operating a botnet, it was also capable of proliferating other malware. As we previously mentioned, ransomware like TeslaCrypt might be delivered – the infection that can lock personal files on the hard drive and all the connected networks. In most of the cases, data recovery is impossible, unless security experts come up with the decryption tool.

Therefore, manual Citadel virus removal might not be enough, as other malware might be operating in the background. We suggest you refrain from tampering with system files and rather trust comprehensive anti-malware programs to do the work automatically.

In some cases, Citadel virus removal might be difficult as it can tamper with anti-virus software. If that is the case, you should enter Safe Mode with Networking – a safe environment that stops malware-initiated tasks from running. We explain how to enter the mode below – please check it out and perform a full system scan.

In case the malware does not let your security application function normally, access Safe Mode with Networking as explained below and complete Citadel malware removal by scanning your computer:

Finally, you should always think about the protection of crypto-ransomwares. In order to protect your computer from Citadel and other ransomwares, use a reputable anti-spyware, such as ReimageIntego, SpyHunter 5Combo Cleaner or Malwarebytes

You can quickly scan the QR code with your mobile device and have Citadel virus manual removal instructions right in your pocket.