Total System Care – a dubious application that is classified as scareware 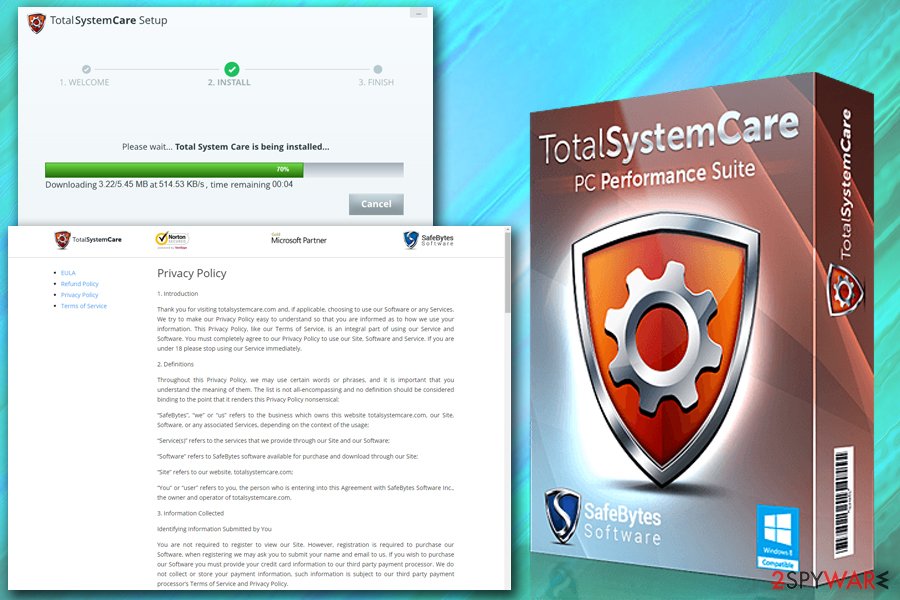 Total System Care is presented as a utility tool that can speed up the PC, fix errors, free disk space, stabilize programs, clean registry entries, etc. The software is compatible with various versions of Windows and was developed in 2013 by Canada-based firm SafeBytes Software Inc. Some users may think that this application is useful as it can fix multiple PC issues. However, security experts[1] consider it a potentially unwanted program[2] that injects users' machines via software bundling.

TotalSystemCare has precisely the same flaw as many other scareware[3] programs – they try to make users purchase the licensed version to gain profit. It would be all good if the “issues” found were real. However, it is not the case – developers seek to confuse users by flashing various warnings about such insignificant things like cookies or temporary files. This program displays exaggerated alerts that can hardly reveal the real PC's situation and make your computer run faster.

Instead, this app may actually damage your machine. It offers to clear registry entries – a tiny database files which hold the configuration settings inside. Many security experts (and even Microsoft themselves) agree that tampering with these files might damage system files permanently and the only solution would be to reinstall Windows – and we are sure you don't want to do that. Therefore, we suggest you remove Total System Care virus from your machine ASAP – don't let it damage your system.

Unfortunately, many users who are not familiar with system files and the operation of the operating system fall for this trick. It is not surprising, as the scareware infiltrates machines without users' noticing and instantaneously starts performing a system scan. As we already mentioned, it finds many bogus issues, and, according to the program, the only way to fix them is by purchasing the licensed version, which costs $29.99USD semi-annually. It is a subscription-based product; thus, users who forget to cancel it will be charged 6-monthly automatically. 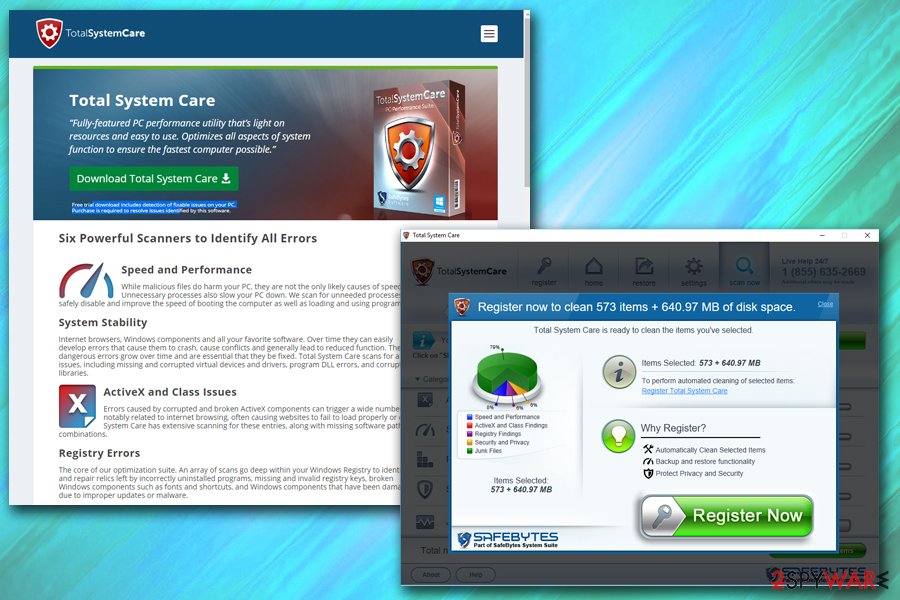 Although the PUP can be downloaded from official website, it usually enters users' machines via software bundling

The worst part is that the users enter their sensitive information when they purchase Total System Care. Thus, such data as name, address, email, and even credit card details may be exposed to questionable third-parties. Therefore, never enter payment information, as it may lead to stolen money or even identity fraud.

Finally, even if you pay for full version, the scareware will not leave you alone. It will keep performing scans and offer to install other dubious applications, or display advertisements directly from your Google Chrome, Internet Explorer, Mozilla Firefox or another browser.

To conclude, if you found that the questionable application is performing scans on your system and finds multiple issues, hurry up with Total System Care removal. You can get rid of it by uninstalling it manually, as well as using reputable anti-malware software (security specialists recommend Reimage Reimage Cleaner Intego) that will make sure that no traces to PUP are left.

The system optimizer can be downloaded from its official website or other sites that are used for promoting questionable applications. However, you should think twice before downloading this program on your computer because cause many adverse effects to your system.

Additionally, the PUP usually infiltrates machines without permission – using software bundling technique. This method is often used by freeware developers and unwanted software authors, as both gain benefit from that. Thus, it is in the biggest interest of software creators to make users install third-party apps, which are often completely useless or even harmful.

That's why you should always monitor the installation process, even if it the legitimate one, as many reputable firms are contracted with PUP developers. For example, Adobe Flash updates continuously try to infect users' computers with various toolbars and add-ons.

Therefore, when installing free programs, always select Custom or Advanced installation settings. This way, you will be able to see the full list of the about-to-be-installed applications, in addition to the desired one. Then, remove all the tick-marks next to components and only then finalize the installation. 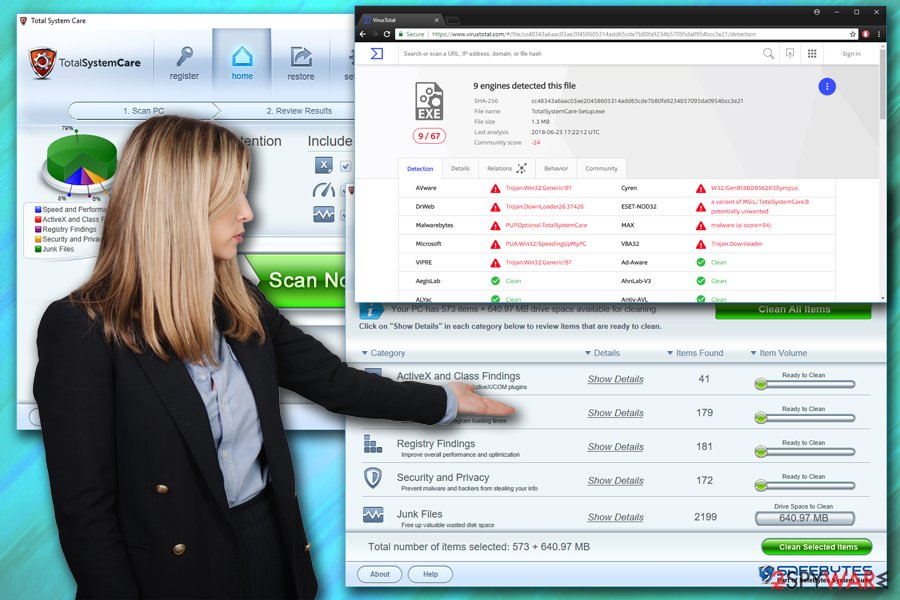 We highly recommend you to remove Total System Care from the system, especially if you have no idea where this program came from. You can perform the elimination in two different ways, or combine them both:

Even if you are an experienced computer user, we would still suggest you scan the system with powerful anti-virus tool to make sure that no traces of the Total System Care virus are left.

Once these steps are finished, Total System Care should be removed from your Microsoft Edge browser.

Get rid of Total System Care from Mozilla Firefox (FF)

Do not forget to reset your Google Chrome in case some potentially unwanted programs made changes to it:

You can quickly scan the QR code with your mobile device and have Total System Care manual removal instructions right in your pocket.