There are many suspicions about Zixer2 virus capabilities. Unlike other emerged crypto-malware which seem to fade in the cyber space soon, this malware refers to one of the older virtual menaces – Xorist ransomware. The previous threat rummaged in the virtual arena. One of the latest infections – Team XRat[1]. Likewise, it would be futile to underestimate this cyber infection. Even if this menace has descended on the computer, there is no need to give into distress. Follow the below instructions to terminate the infection and decrypt files. Accelerate Zixer2 removal with Reimage Reimage Cleaner Intego or Malwarebytes.

This malware follows the lead of other recent appearances: NX ransomware, Gx40, Fluffy-TAR virus, etc. Unlike the majority, Zixer2 malware uses a different file encryption method – Tiny Encryption Algorithm[2]. Its main advantage lies in easy manual and usage. Mainly it relies on block ciphering. Though it uses 128-bit key and 64-bit data block schedule, it possesses a very simple structure. It results in appending files with .zixer2 file extension[3]. Guidelines and further information how to recover files are presented in the HOW TO DECRYPT FILES.TXT files. It is unlikely that the threat is related to the same gang which has been notorious for spreading dozens of crypto-malware and providing @india.com email address. Nonetheless, it provides datares@india.com email address for contacting the felons. Due to low activity, the malware is not suspected to become a big threat to netizens. Nonetheless, it hints that Xorist cyber gang or another group of cyber villains restlessly engages in ransomware generating activities. Fortunately, virus researchers have previously devised a key for this particular malware a while, so Xorist Decrypter might help decrypt the files, especially if they are encrypted by such simple method[4]. Only after you remove Zixer2, decode the files. 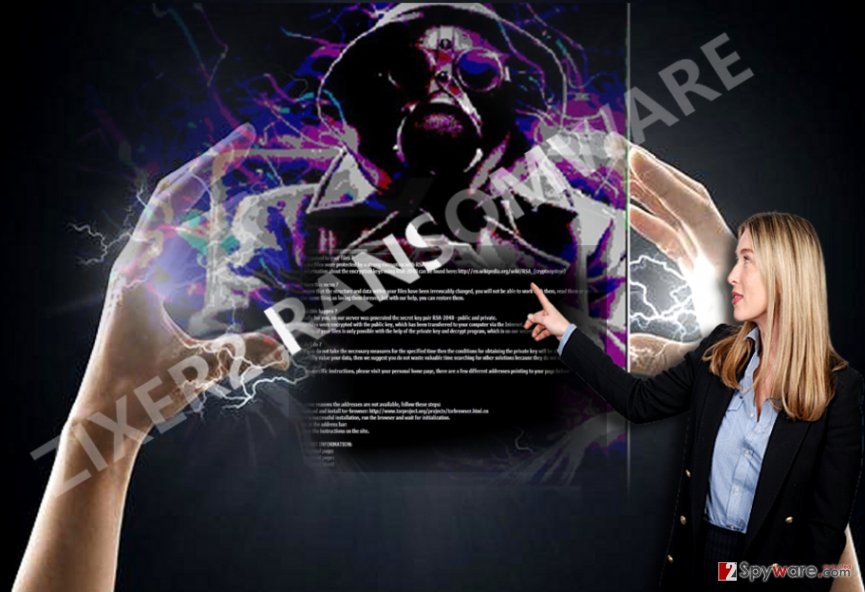 How did I get infected with this malware?

Most likely, you got accidentally activated Zixer2 hijack when you opened a malicious email attachment. Do not fall into the trap even if you see a spam email addressed personally to you. Hackers might use altered credential of existing and official institutions in order to earn your trust. In addition, the majority of file-encrypting threats also wander as trojans. Exploit kits, and malicious scripts serve as the catalysts of ransomware hijack[5]. That is why sole cautiousness and vigilance are not enough protection guarantee indicators. Update your security applications. Some of them, such as Reimage Reimage Cleaner Intego and Malwarebytes will help you get rid of the virtual infection as well.

Despite how weak or elaborate crypto-malware may be, it is not recommended meddling with it manually. Updated anti-spyware applications will assist in performing Zixer2 removal. In case, your computer screen is locked, make use of the below-shown instructions. Below them, you will find alternative solutions for data recovery. Bear in mind that this procedure will only take effect if you have fully deleted the infection. Taking into account the fact that this malware is less elaborate, try terminating its processes via Task Manager. Launch it with ESC+CTRL+SHIF and look for unusual processes which take up large CPU capacity. Zixer2 ransomware might be disguised under update.exe or explorer.exe executable files.

It is unlikely that Zicer2 virus might cause big elimination problems, but System Restore is another option to regain access

Guide which is presented above is supposed to help you remove Zixer2 from your computer. To recover your encrypted files, we recommend using a detailed guide prepared by 2-spyware.com security experts.

If your files are encrypted by Zixer2, you can use several methods to restore them:

Try recovering your files with this program. It also comes in handy retrieving lost and deleting emails.

Since it is identified as a version of Xorist, this decryption tool might be useful.

Finally, you should always think about the protection of crypto-ransomwares. In order to protect your computer from Zixer2 and other ransomwares, use a reputable anti-spyware, such as Reimage Reimage Cleaner Intego, SpyHunter 5Combo Cleaner or Malwarebytes

You can quickly scan the QR code with your mobile device and have Zixer2 ransomware virus manual removal instructions right in your pocket.