AES-NI virus is a ransomware-type program that is set to encrypt data on a computer using AES and RSA cryptography ciphers. Earlier variants of this virus used to append .aes_ni or file extensions to corrupted records, while the latest version (SPECIAL VERSION: NSA EXPLOIT EDITION) adds .aes_ni_0day file extensions. Following a successful data encryption, the virus creates a text file called !!! READ THIS – IMPORTANT !!! .txt and saves it on the desktop. This file holds a ransom-demanding message and instructions on how to decrypt data locked by the virus. Examination of the virus’ samples revealed that cybercriminals demand a ransom that’s worth 500-1600 US dollars. However, the sum must be paid in Bitcoins (virtual currency). Researchers at 2-Spyware strongly advise victims not to pay the ransom and remove the ransomware instead. 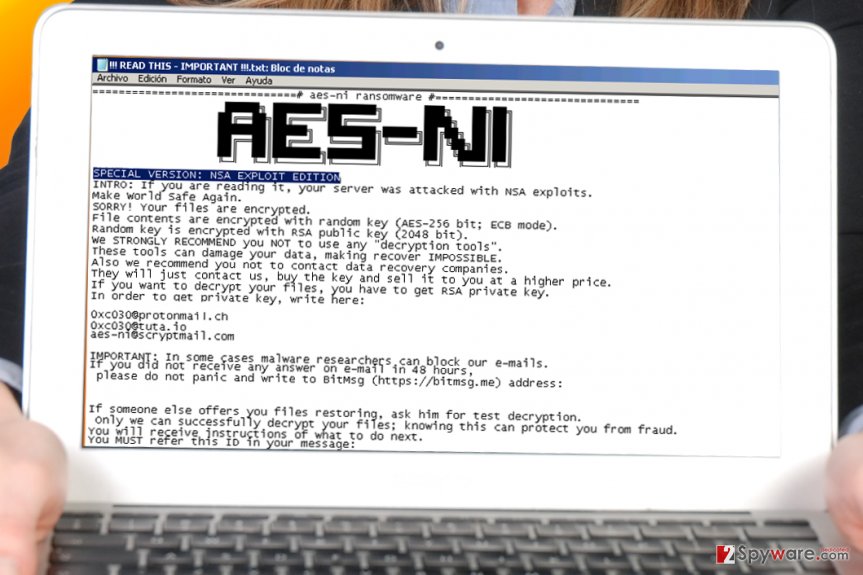 AESNI ransomware is also believed to be an updated variant of AES-256 virus. Just like the new one, the earlier malware version used to attack computers with far-reaching AES-256 algorithm, which searches for .doc, .jpg, .mp4 and other important files, encodes them, and then appends .aes256 file extension [1]. It must be noted that ransomware uses advanced multi-layer encryption tricks to secure victim’s files, therefore it is technically impossible to restore them without knowing the unique key, which the malicious program auto-generates and transmits to criminals’ servers. If you are not specifically familiar with encryption types, it is enough to know that it is AES symmetric encoding technique and RSA asymmetric method. The first one may use 128 or 256-bit cycle of ciphers to encode the files. Naturally, the 256-bit algorithm includes longer cycles and more elaborate cycles of ciphering than 128-bit one. As a result, AESNI virus generates a more exquisite encryption key which is, theoretically, almost uncrackable. However, it does not mean that it is time to fall into despair and grieve over the lost files. Instead, it is advisable to remove AES-NI and use data backups for data recovery.

Cybercriminals know that victims might get attempted to contact the crooks. For that purpose, they provide the following email addresses: aes-ni@protonmail.com and aes-ni@tuta.io. The latest variants of this ransomware provide different addresses – 0xc030@protonmail.ch, 0xc030@tuta.io andaes-ni@scryptmail.com. Even if the amount of ransom does not seem too high for you to pay, keep in mind that you are dealing with cyber criminals. They are not obliged to transfer the decryption key even after receiving the demanded amount of money. Such assumption is more likely taking into account the story of CryptoWall [2]. Therefore, it is unwise to foster hopes and rely on fraudsters‘ sense of conscience. Instead, make AES-NI removal your current priority. For that, experts advise using programs like Reimage Reimage Cleaner Intego. 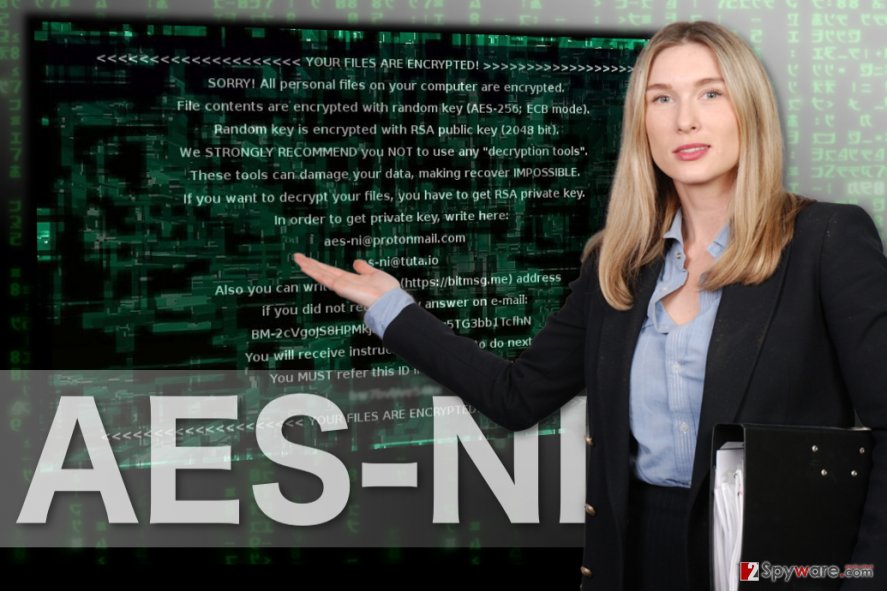 AES-NI ransomware covers computer's desktop with the ransom note titled as "YOUR FILES ARE ENCRYPTED." To trick their victims into making payments, its developers also recommend not using any "decryption tools"

AES NI ransomware employs traditional malware distribution channels, such as spam messages, malvertising, or infectious torrent files. Although malware researchers repeatedly remind users of the deception techniques that ransomware distributors use (specifically, the hackers‘ tendency to disguise in fake tax reports or invoices), a number of users still fall for the bait. Users should also stay clear of fake emails from the Office of Personnel Management (OPM). Though Locky ransomware prefers hiding in disguising under the name of this institution, due to last year’s data breach, other crooks might take up the habit as well. In general, emails carrying corrupted attachments contain the number of typing and grammar mistakes. They are especially visible in the forged emails of official institutions. The absence of special numeric and PIN codes might alert you as well [3]. In addition, beware of trojans, the harbingers of crypto-malware, and remember that up-to-date security applications serve well as shields against them.

Update April 2016: developer of the virus claims to be distributing it using leaked NSA exploits

The developer of AES-NI now claims that recently leaked NSA exploits (by the Shadow Brokers group) helped him to infect Windows servers with the ransomware on a global scale. The criminal who claims to be the author of this ransomware has been quite active in online forums and Twitter lately. His posts suggest that he has successfully employed ETERNALBLUE exploit that targets SMBv2 protocol. However, this statement remains obscure since the only evidence criminal provided was a screenshot of an ongoing scan of a server for three NSA exploits. However, researchers discovered that the number of infected hosts suddenly increased over the weekend after the exploits were unveiled. However, researchers are not inclined to believe that criminal’s claims are true. Some researchers expressed their opinions[4] saying that the ransomware is transmitted using RDP attacks, not NSA exploits. The alleged author of the ransomware strongly denies it and also blames malware researchers for blocking his email accounts, saying that victims can no longer get an answer from him via email. Researchers never do it because it’s the victim who chooses whether to contact the attacker or not.

May 2017 marks an important stage in AES-NI ransomware development. The security researcher by the screen name Thyrex has posted AES-NI decryption keys allowing virus victims to recover their data free of charge. The researcher has obtained the 369 unique decryption keys, decryption executable and the user’s manual from the ransomware developer himself via private message on Russian web forum. After a closer analysis of these three components Thyrex found that they really work but are meant to decrypt a specific version of the virus which uses frogobig777@india.com email to communicate with the victims. We insert the download link at the end of the article.

The motifs behind the disclosure of AES-NI keys are quite vague, but according to the software developer, this malware is already outdated, so there is no reason to keep the AES-NI project going. The unknown hacker also talked about the upcoming release of the rest of ransomware keys. If you are infected with the virus version other than frogobig777@india.com, make sure you check back with us later. We will post the recovery tools as soon as they come up.

The easiest way to remove AES-NI virus is to run a scan with anti-malware software. Programs like Reimage Reimage Cleaner Intego or Malwarebytes can banish the virtual threat completely, so our team recommends installing one of those in case you do not have any security programs yet. Note that none of the malware elimination software is capable of decrypting the files. For that reason, you might need an alternative tool or a backup. The latest Windows OS versions have in-built features that helps to easily back up all your files, however, if the ransomware gets administrator access to the system, these backups can be deleted or encrypted as well. Therefore, the only 100% effective backup is the one you created and transferred to a portable data storage device(USB or a hard drive). In general, creating data backups should be an obligatory task taking into account the recent surge of ransomware threats [5]. Even if you do not have additional copies, our further recommendations might be of use. Take care of AES-NI removal and then proceed to the following steps.

If you are willing to remove the ransomware from your computer, you can find out that it blocks your security software. To overcome this issue, try rebooting your computer to Safe Mode with Networking.

If Safe Mode with networking does not help, you can try System Restore

Guide which is presented above is supposed to help you remove AES-NI from your computer. To recover your encrypted files, we recommend using a detailed guide prepared by 2-spyware.com security experts.

If your files are encrypted by AES-NI, you can use several methods to restore them:

If you do not possess any backup copies of your encrypted files, try using this application for file recovery. It is a practical application when you cannot find missing files.

If System Restore was enabled on your computer before infiltration of the defined ransomware, you can try using the following steps:

A decrypter for AES-NI version that indicates frogobig777@india.com email as means of communication with the criminals have just been released and you can download it by clicking this link. Enter this password to unlock the Zip file: 6bvlWD9yz3yBtQyOhtAqFheg.

Finally, you should always think about the protection of crypto-ransomwares. In order to protect your computer from AES-NI and other ransomwares, use a reputable anti-spyware, such as Reimage Reimage Cleaner Intego, SpyHunter 5Combo Cleaner or Malwarebytes

You can quickly scan the QR code with your mobile device and have AES-NI ransomware virus manual removal instructions right in your pocket.