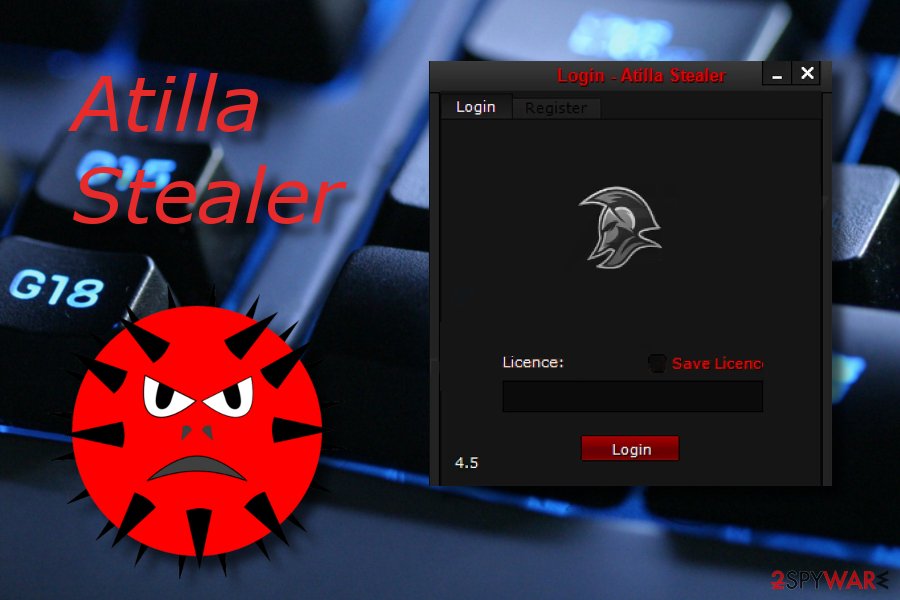 Atilla stealer is described as a RAT (Remote Access Trojan)[1] that is created to carry out illicit activities by activating malicious processes in the background. This suspicious software is promoted on the Dark Web[2] and its original website atilla.vip. Atilla stealer virus convinces people to download its app and install it on the computer system. After that, the malicious program can start running without showing any signs and users often do not even notice any questionable or malware-laden activities until they scan the system or encounter suspicious executables running in the Task Manager section. Once the malware gets on a particular machine, it might result in data theft of the user's personal information.

Atilla stealer malware is promoted on its official website which gives the program a look of legitimacy. The developers of this malicious software provide this type of review for the application:

However, if you are an accurate person, you will supposedly spot some grammar mistakes in the above-given quote. You should know that companies who promote reliable software do not make mistakes in their promotion texts. Another sign for you should be the stealer word in Atilla stealer. It may look like some aim is hidden behind the name.

If you install Atilla stealer, there is a big possibility that you will not notice anything suspicious at first. However, later on, you might start experiencing some changes in your computer system. For example, programs and applications might be taking more time to launch, the machine is facing sluggishness what did not happen before, software is crashing, etc. 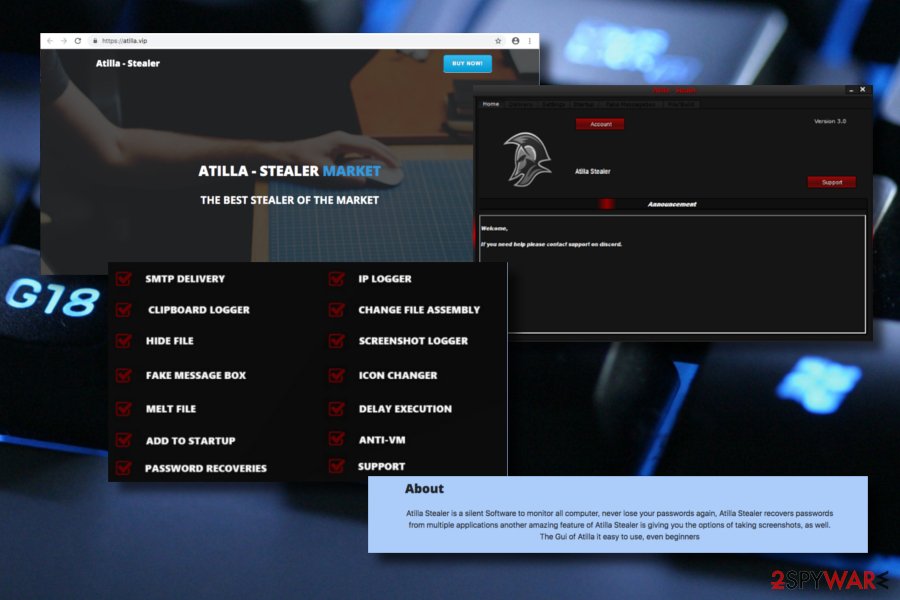 Atilla stealer is a trojan that can relate to data theft, money losses, and privacy problems

Additionally, Atilla stealer trojan might leave suspicious-looking executables in your computer system. You might overcome rogue processes running in the Task Manager section of your Windows computer. Also, some anti-malware tools are capable of detecting the malware in these names:

If you think that this trojan has infiltrated your system, we recommend scanning the entire computer system for malware signs. We also suggest using a program such as Reimage Reimage Cleaner Intego or SpyHunter 5Combo Cleaner. If these programs spot some malicious changes in the machine, you can proceed with the Atilla stealer removal process.

You need to remove Atilla stealer from all locations of your computer, otherwise, the program will supposedly start eating your computer resources to perform its malicious activities. Also, it might relate to personal data theft, some privacy problems, banking credential theft, and money losses, other computer infections. 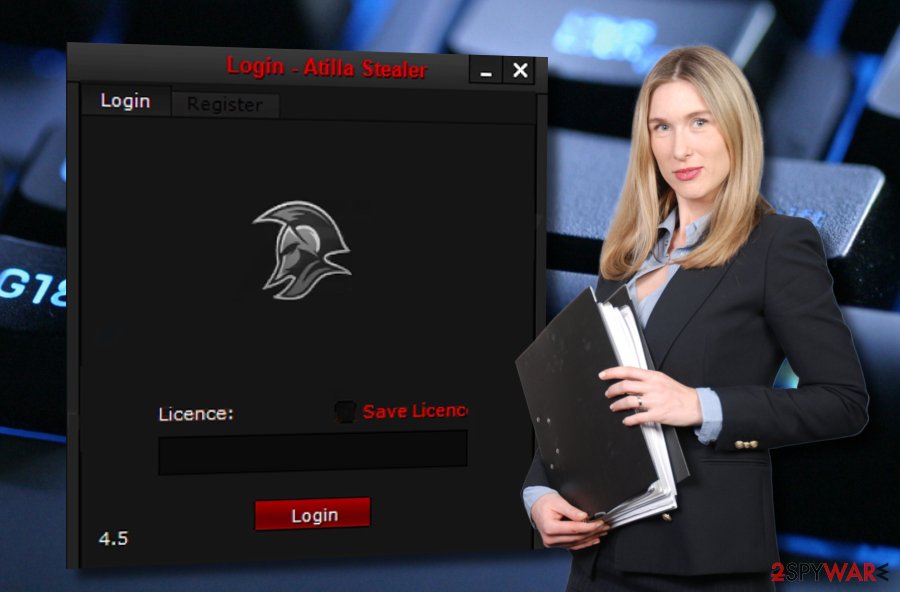 Atilla stealer is malware that has its official website

Even though some malicious programs have their official websites where developers try to promote their malware-laden apps in various ways, the most popular technique for malware such as trojan distribution is through spam email messages[3] and their infectious attachments (mostly, executables or word documents).

Experts from NoVirus.uk[4] urge users to be aware of questionable email messages and avoid opening them, especially their attached files or documents. A way to identify the legitimacy of the received content is to use an anti-malware or antivirus tool and scan the component which is clipped to the email message.

Cautious on the Internet sphere is the main precautionary measure for malware avoidance. Computer infections such as trojans might also be injected into suspicious hyperlinks or infectious banner ads. Do not click on any content that you cannot recognize, and even better, immediately close all third-party pages that you accidentally enter.

Atilla stealer trojan should be terminated by performing the process automatically

If you have detected this trojan infection on your computer system, better not to try to eliminate the malware manually as you might make harmful mistakes or miss some crucial components that need to be terminated. For detecting malware-laden objects you can use tools such as Reimage Reimage Cleaner Intego, SpyHunter 5Combo Cleaner, or Malwarebytes. When you finish scanning the system, you can proceed with the Atilla stealer removal.

You need to remove Atilla stealer virus from your Windows computer system to avoid all possible damaging consequences and prevent money, personal data losses. The infection needs to be terminated as soon as you discover the cyber threat on your machine. Ensure that all trojan-related objects are also removed, otherwise, the infection might launch again within the next system restart.

Turning on Safe Mode with Networking might allow you to disable the activities of the trojan. If you need some help with this process, take a look at the below-given instructions:

Use System Restore if you want to deactivate the malware on your computer system. Turn in this function by following the guide:

Finally, you should always think about the protection of crypto-ransomwares. In order to protect your computer from Atilla stealer and other ransomwares, use a reputable anti-spyware, such as Reimage Reimage Cleaner Intego, SpyHunter 5Combo Cleaner or Malwarebytes

You can quickly scan the QR code with your mobile device and have Atilla stealer manual removal instructions right in your pocket.