Baldr malware – a trojan that is linked to Russian underground hackers 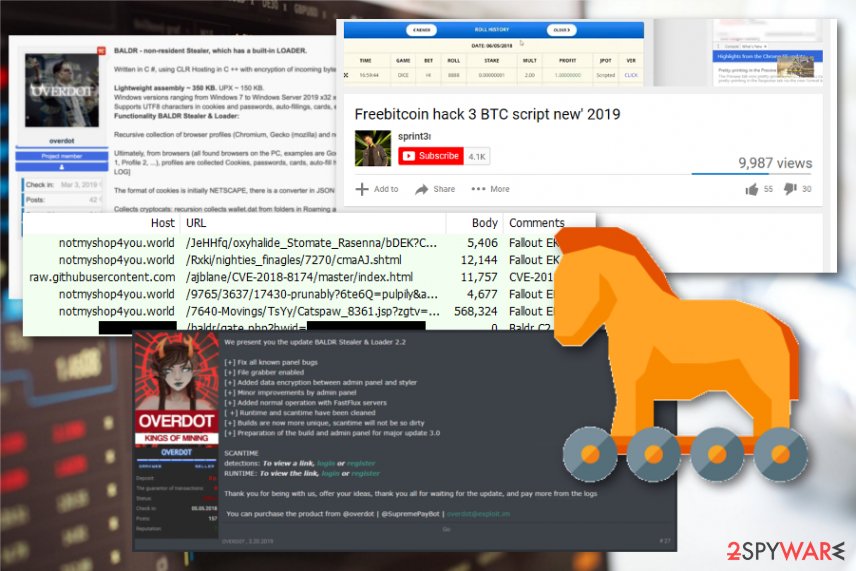 Baldr malware is a new, cross-platform information-stealing trojan that captures valuable information including passwords and important files. The virus is offered on the black market forums[1] for as low as $150. The data this malware steals mainly includes profiles, cryptocurrency wallets, text documents and Telegram sessions or records from VPN clients. It was spotted back in 2018, and in 2019 more information was published by cybersecurity researchers.

Security experts link this Trojan to at least three Russian hacker groups: Agressor is responsible for the distribution of this malware, Overdot manages sales and promotion, and LordOdin takes over its development. The reports on this malware state that the Baldr trojan appears skillfully crafted and persistent.[2]

Baldr malware is an information-stealing tool that can be purchased online by anyone for $150, meaning that even novice hackers can use it. On the other hand, more advanced malicious actors might take up the development and expand the range of capabilities this malware can offer.

While lesser threats like potentially unwanted programs mainly focus on harvesting non-personally identifiable information, the Baldr virus can access and steal personal and even financial information:

As any other trojan, Baldr malware is designed to infiltrate a targeted system and remain running in the background unnoticed. However, this is a virus that targets every victim individually it has no automatic spreading mechanism, as far as reports show. It is pushed and promoted by his authors and distributors.

There is no effort to hide the exfiltration process, and the trojan sends all the data in one network transfer that becomes obvious and noticeable no matter how little files it involves. Baldr malware searches for particular files on the machine and steals data stored on them: 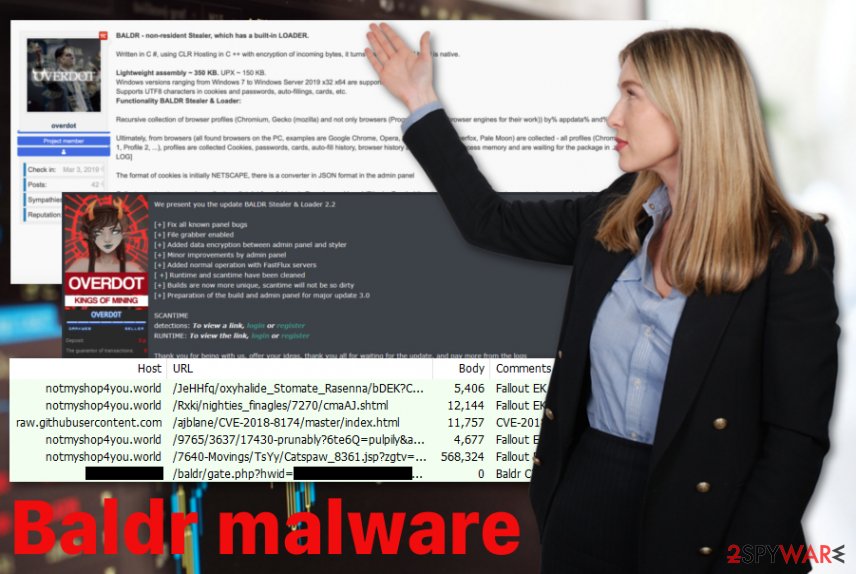 Baldr trojan is the cyber threat designed to infiltrate the system and run in the background unnoticed.

Baldr malware virus first appeared in January and right now malicious actors distribute 2.2 version of the trojan. Many cybercriminals reviewed this product of Russian hackers positively in hacking online forums. The virus often operates in a grab-and-go mode which means that it gathers data from the computer and sends to an attacker.

You need to remove Baldr malware as soon as you noticed because this threat infiltrates the targeted system, grabs all the needed data and packs it in the zip file to send it back to the developer. It can auto-delete itself after this process, and it makes much more difficult to know whether you've been affected by this it or not.

Baldr malware removal, later on, may only reveal traces of the damage and additionally installed malware not traces of this info-stealer. If the damage is already made, you need a professional tool like ReimageIntego and remove all programs, files, malicious processes or even fix issues with your operating system.

Many experts[4] comment on the Baldr virus popularity and state that information stealers have been developed more powerful and efficient. Developers push new features and functions, make small threats that can affect everyday users and businesses.

People think they are downloading software, updates or free cracks, or gets Bitcoins for free but the only thing they get is this Baldr info-stealer. It may even lead to stolen cryptocurrency since the trojan exfiltrates data regarding various cryptocurrency wallets.

Trojan distribution and how to defend against it

Russian hackers operate this info-stealer and distributed mainly in underground forums with the help of Agressor. It also is distributed via campaigns involving exploit kits or social engineering campaigns when fake Bitcoin generator application is promoted on YouTube and other platforms.

FallOut exploit kit in particular reported as one of the methods used to deliver this trojan. Trojanized applications disguised as cracks or hacking tools deliver this malware instead of the wanted app or tool.

Another more common way to spread this type of threats is spam emails and file attachments containing malicious scripts of harmful viruses like Trojans, malware, and keystroke loggers or even ransomware. Once the email is received and opened, it takes a few clicks of the mouse, and the machine gets infected.

You can avoid this infiltration if you pay more attention to these notifications, avoid opening and downloading ransom documents, executable files or archives attached to the email. Keeping anti-malware software running on the PC can also create the advantage of blocking the malicious content before initial infiltration.

Given that Baldr malware virus is distributed using various campaigns, including exploit kits, keeping your machine up-to-date and all issues with the OS fixed can give you the advantage. It is especially crucial for businesses and companies because reducing the attack surface by removing unnecessary plugins and fixing system issues can help to keep the network safe.

However, when the trojan is already affecting the machine or a whole network, Baldr malware removal requires professional tools and proper help. ReimageIntego, SpyHunter 5Combo Cleaner, or Malwarebytes can clean the machine after the virus attack and possibly fix the damage or remove unwanted additional installs and intruders.

Make sure to remove Baldr malware and programs installed without our permission and consent. Based on malware distribution ways, this trojan can come with other threats or deliver a secondary payload of the cryptovirus or ransomware, so your machine may be at much more significant risk besides this info-stealer.

Try rebooting to Safe Mode and then scan the computer with anti-malware, since Baldr malware can disable some security functions. This way trojan can be terminated properly:

System Restore may also help when removing Baldr trojan because this feature can restore the computer to a state when the malware was not running on the machine:

Finally, you should always think about the protection of crypto-ransomwares. In order to protect your computer from Baldr malware and other ransomwares, use a reputable anti-spyware, such as ReimageIntego, SpyHunter 5Combo Cleaner or Malwarebytes

You can quickly scan the QR code with your mobile device and have Baldr malware manual removal instructions right in your pocket.