JS:Cryptonightminer is the name Avast and AVG vendors give malicious crypto-mining script embedded on various sites, although can also be a false-positive 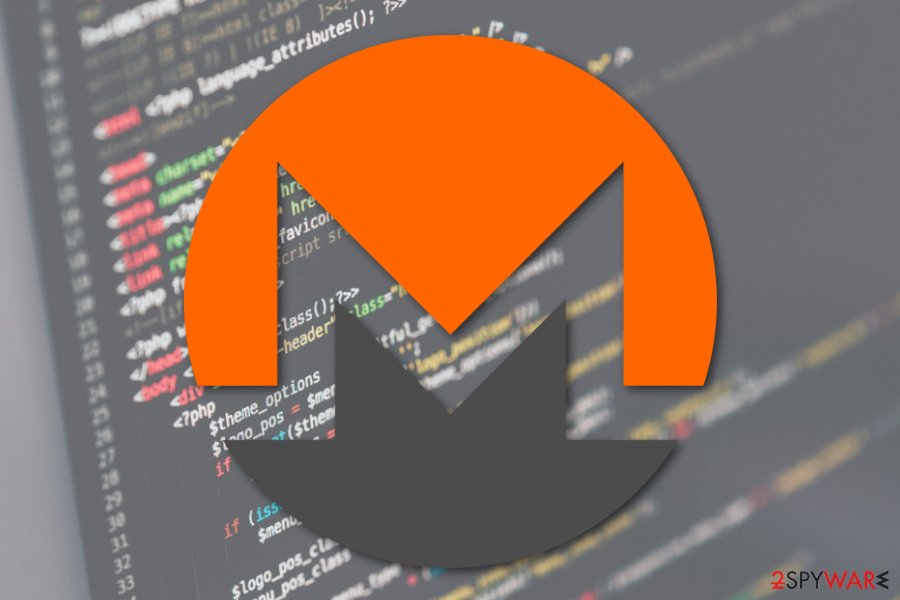 JS:Cryptonight is a cryptominer that uses Cryptonight algorithm to mine Monero and is based on JavaScript.[1] The unique feature of malware is that it can affect both Windows and Mac operating systems. The trojan might enter the system via malicious spam emails or other stealthy methods and immediately start utilizing the GPU and CPU of the affected device for illegal cryptocurrency mining. The mined funds are immediately transferred to a preset crypto wallet, generating money regularly for the threat actors behind the JS:Cryptonight malware.

While the detection might mean that your browsers are infected, it can also be a false-positive,[2] as users reported that they were getting the JS: CryptoNightMiner-A [Trj] alert on legitimate sites like YouTube. In such a case, it is recommended updating Google Chrome, Mozilla Firefox, or another users browser along with AVG or Avast security software to stop false alarms.

If, however, the infection is present it is vital to get rid of JS:Cryptonight miner as soon as possible, as its malicious background processes might compromise the computer security and result in further malware infections, wear out the hardware, and also result in increased electricity bills. For that, please scan your computer with reputable anti-malware software as soon as possible.

As we have mentioned, JS:Cryptonight virus might enter the system after downloading the malicious email attachment. However, it can also infect it after visiting a questionable website, for instance, illegal video streaming or web game site. If you have antivirus installed on your PC and it is up-to-date, it is supposed to warn you about such activity.

JS: CryptoNightMiner-A [Trj] might also get into the system pretending to be a legitimate program or its update. Hence, the miner might be installed after downloading freeware or shareware. In this case, the malicious program initiates system changes and immediately starts using computer’s resources to mine cryptocurrency. 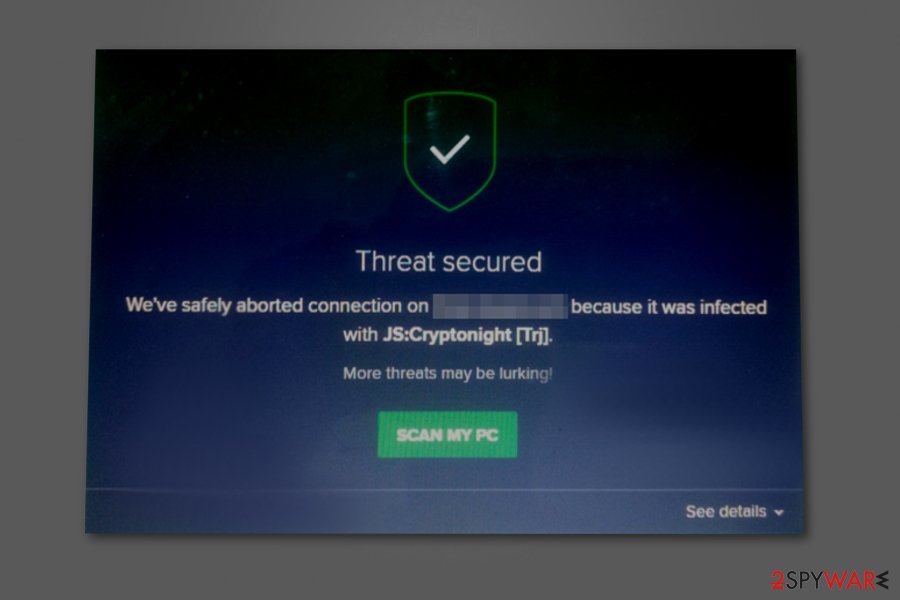 JS:Cryptonight is a term used by many antivirus programs to identify a cyber threat on the system.

The miner runs on a Javascript algorithm called Cryptonight.[3] It is specially designed to mine Monero cryptocurrency which gains more and more popularity[4]. You can suspect that it was installed on your Mac or Windows computer if you see suspicious processes running in the Task Manager/Activity Monitor and notice sluggish computer performance. Sometimes the mining is initiated while visiting specific websites. In this case, the process should stop once you close these sites and leave them.

In case you believe you are infected, you should not try to remove JS:Cryptonight manually. Malware might consist of numerous different files which have to be erased as well. Additionally, other malicious programs may have been installed on your device too. 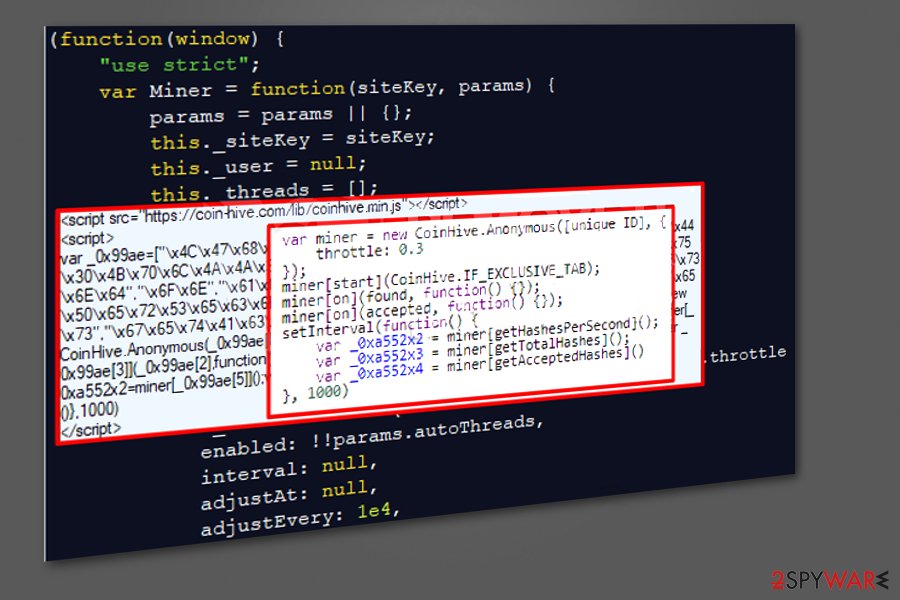 For this reason, it’s recommended opting for automatic JS:Cryptonight removal which requires scanning the system with anti-malware tool, such as Reimage Reimage Cleaner Intego. At the moment, AVG is detecting this virus as JS:CryptonightMiner-a or JS: CryptoNightMiner-A [Trj]. This task should not be delayed because, as you might have already understood, the virus can lead your PC to the loss of valuable information and similar issues. Such cyber threats have unlimited abilities, so make sure you keep an eye on them.

Even though it is hard to identify that your system is infected with JS:Cryptonight virus, users report about multiple issues which are caused by this cyber threat in the long-run. Usually, a computer becomes noticeably slower and fails to load specific applications on a daily basis. 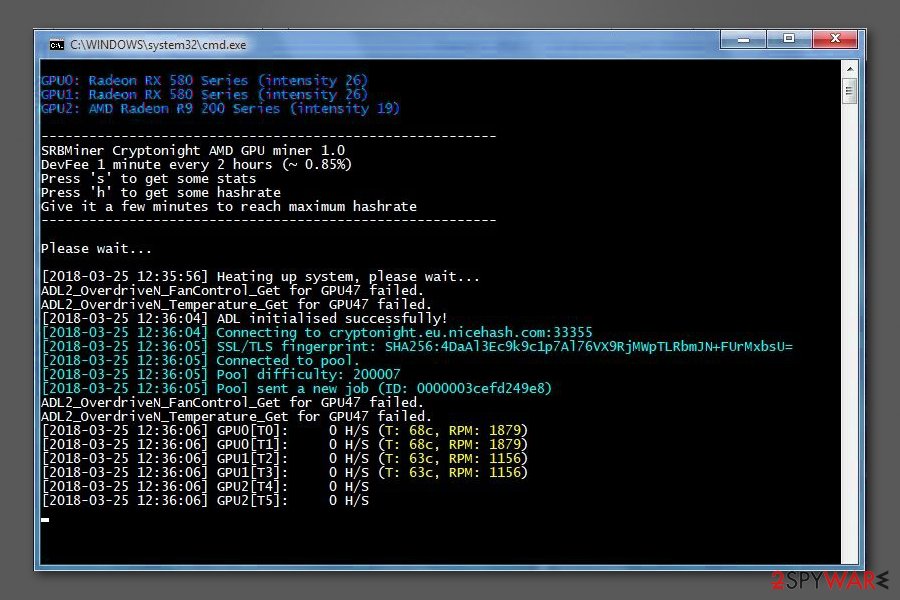 It is because JS:Cryptonight miner exploits high amounts of computing power to mine Monero digital currency. In other terms, the system is forced to reallocate all its resources to cryptocurrency mining for long periods of time. As a result, it operates at high temperatures for excessive amounts of time and has little resources left for essential processes.

Likewise, if JS:Cryptonight sneaks into your system, there is a substantial risk that you will face the following problems: 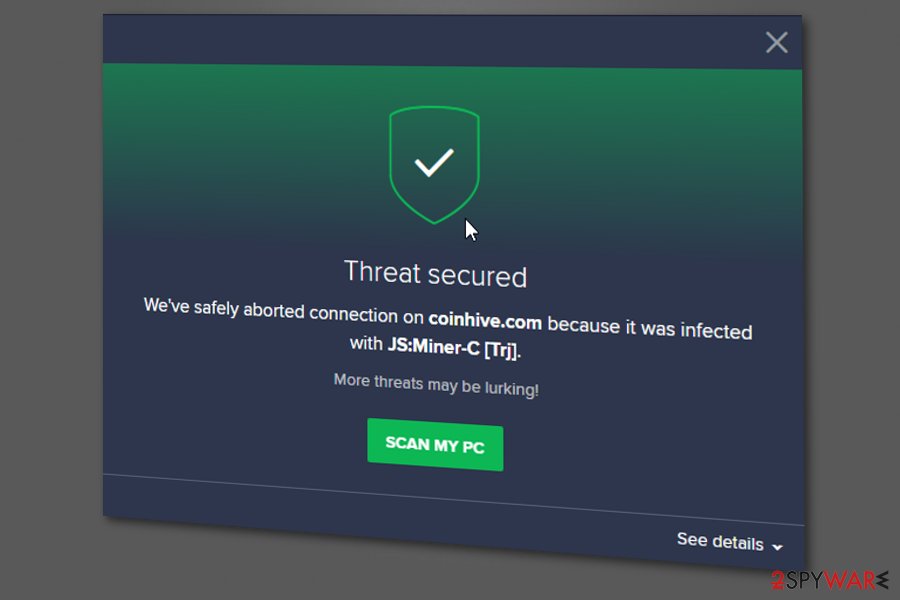 There are numerous other infections similar to JS:Cryptonight miner.

Furthermore, these are not the only dangers of JS:Cryptonight attack. Keep in mind that all infections, including crypto-malware, make computer's system vulnerable to other dangerous viruses. Thus, the presence of this Monero miner might increase the risk of occurrence of other potentially malicious programs.

The trojan horse might enter the system using a couple of methods. However, each of them requires user’s participation. Typically, malware is advertised as useful program or software update. Hence, users might install it themselves.

Usually, such programs are available on unauthorized file-sharing websites, P2P networks, torrents and similar questionable sources. For this reason, users are advised to stay away from such places. If you need a particular program, you should rely on developer’s websites only. 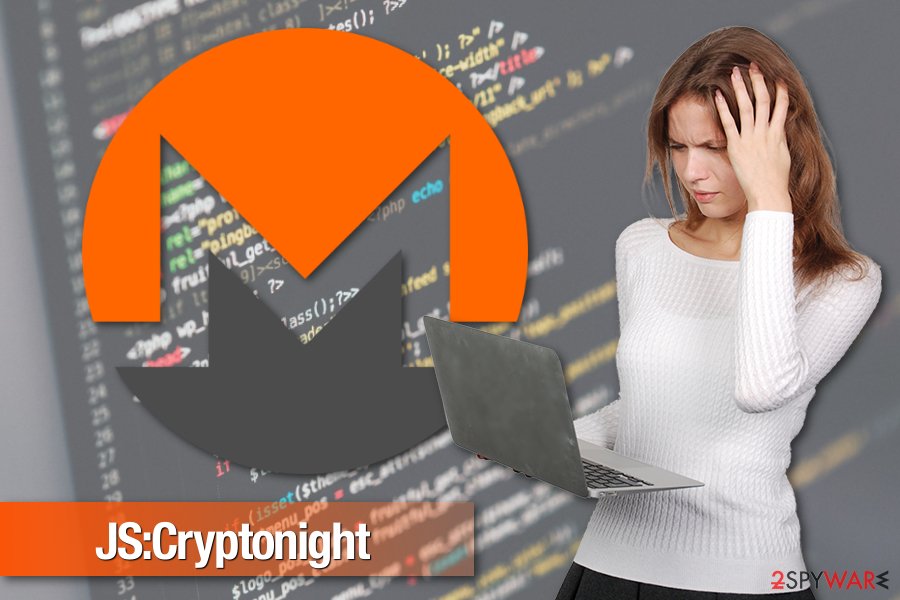 Additionally, experts from LosVirus.es[5] remind that it’s important to pay attention to software installation process too. If you decide to install freeware or shareware, you need to use Advanced/Custom settings and opt out all pre-selected optional programs. Usually, they have more negative features than are beneficial to the user.

Keep in mind that Quick/Recommended settings do reveal what is hiding in the software bundle. Hence, if you use them, you give indirect permission to install all third-party applications without even knowing it.

Delete JS:Cryptonight virus from the machine

To remove JS:Cryptonight trojan virus from Mac or Windows correctly, you have to use powerful security software, such as Reimage Reimage Cleaner Intego or Malwarebytes. It doesn’t matter whether malware infected Mac or Windows device, automatic removal is the only safe method to remove cryptocurrency miner.

Manual JS Cryptonight trojan removal might not be effective. The miner might come back and continue its activities once you reboot the computer. Additionally, you might accidentally terminate legitimate system files which may lead to irreparable damage to the system.

If JS:Cryptonight is blocking access to security software, follow these steps and get rid of this virus with the help of Safe Mode with Networking:

This method might also help to get rid of this Trojan virus with the help of System Restore method:

Finally, you should always think about the protection of crypto-ransomwares. In order to protect your computer from JS:Cryptonight and other ransomwares, use a reputable anti-spyware, such as Reimage Reimage Cleaner Intego, SpyHunter 5Combo Cleaner or Malwarebytes

You can quickly scan the QR code with your mobile device and have JS:Cryptonight virus manual removal instructions right in your pocket.