Kraken Cryptor 2.2 ransomware is a cryptovirus that mimics the ransom note of Cerber virus 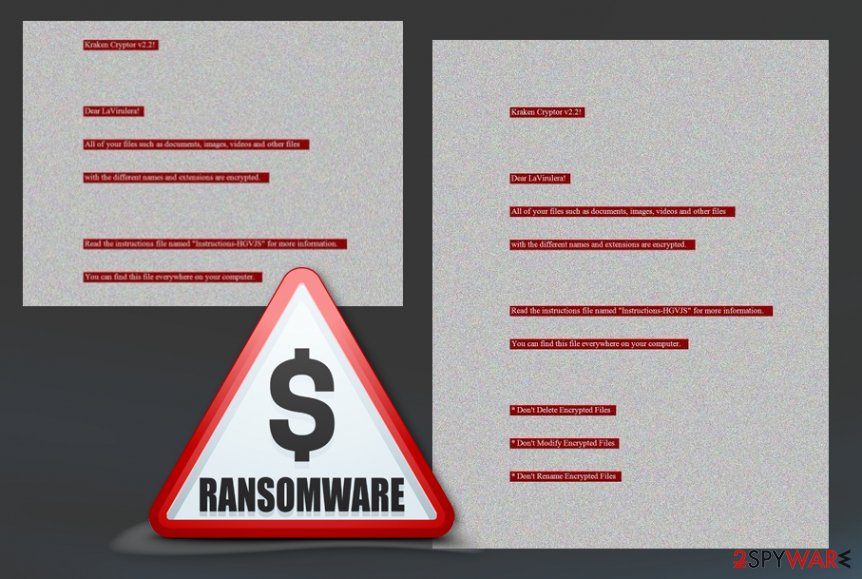 Kraken Cryptor 2.2 ransomware is a cryptovirus that uses a combination of algorithms to encrypt data on the infected device. It hails from the Kraken Cryptor family that started its activity in August of 2018 and already has eight versions. This particular version encrypts data and marks files with extension consisting of five random characters. Virus developers demand $80 for file recovery, but we don't recommend falling into this trap. After sending your money to Kraken Cryptor 2.2 ransomware developers, you can be left with no money and no files.[1] The ransom and other details are typically provided in the ransom message that is displayed on the desktop. This particular version of a ransom message seems to be a clear replica of Cerber virus as victim's Desktop changed to the almost identical ransom note and cover.

Kraken Cryptor 2.2 ransomware virus payload is activated when the malicious file gets on the targeted system and initiates the ransomware script. It enables a sequence of system modifications and all infections stages. Encryption is not the first stage of the ransomware attack.[2]

The first step Kraken Cryptor 2.2 ransomware does on the infected device is adding files to various system folders. Data associated with this threat that can keep it more persistent can be stored in:

When additional changes are made on the system, Kraken Cryptor 2.2 ransomware starts the encryption process during which the data in various forms gets locked in a matter of seconds and marked with file appendix in a random character pattern.

Then the ransom message is placed as a Desktop background, and as soon as this happens, the voice-over message starts repeating the written text. This ransom note delivered by Kraken Cryptor 2.2 ransomware displays the following:

Kraken Cryptor v2.2!
Dear [user name] All your files such as documents, images, videos and other files
With the different named and extensions are encrypted.

Read the instructions file named “Instructions-[extension]” for more information.
You can find this file everywhere on your computer.

The file mentioned in this ransom note contains direct instructions on the payment method and states that the ransom amount is $80. Money should be converted in Bitcoin cryptocurrency and send to the cryptocurrency address that hackers provided.

You need to remove Kraken Cryptor 2.2 ransomware because it additionally modifies registry entries under Run or RunOnce sub-keys. This modification is made so the functionality of the ransomware could enable the process on each system reboot. Same keys may also store values associated with the ransom note displayed on the Desktop which initiates the voice-over automatically. 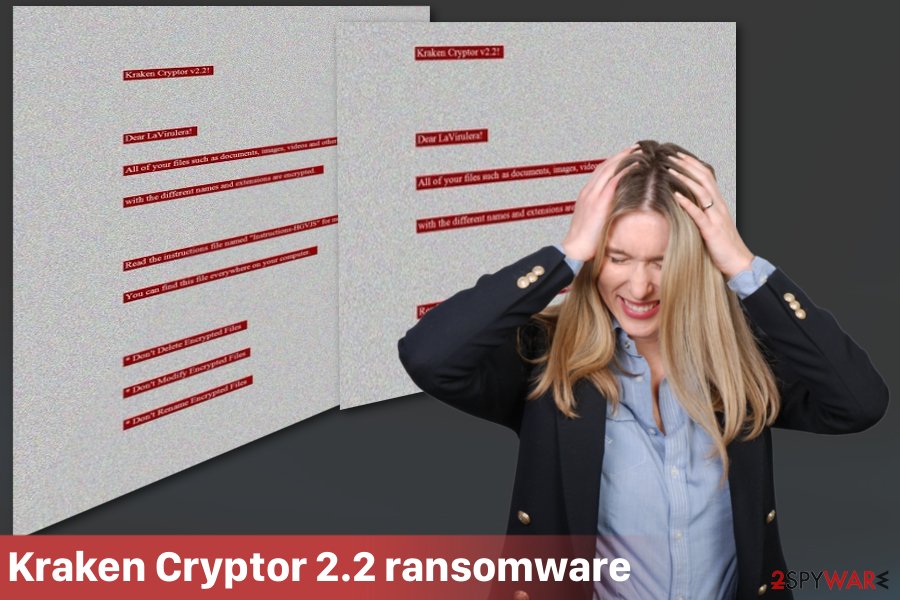 Kraken Cryptor 2.2 ransomware is a cyber threat developed by hackers known since August 2018.

The primary technique used to distribute crypto-extortion based malware is insecure email attachments. The payload is activated on the system when the malicious script is added and opened on the network. These emails could pose as the official company or legitimate service to make the user more trusting to open the attached file.

Unfortunately, this ransomware payload can be added to safe-looking MS Word or Excel files and the minute you download the attached document and open it on the computer malicious malware loads on the system.

However, recently researchers[4] discovered that hackers responsible for this cyber threat used Fallout exploit kit to spread the malicious script of previous versions. This is a sophisticated technique that triggers a series of malicious events to allow hackers to gain control over the system of the infected device. This is unnoticeable and automatic, so this method leads to the activation of ransomware directly on the system.

To remove Kraken Cryptor 2.2 ransomware from the system completely, use Reimage Reimage Cleaner Intego, SpyHunter 5Combo Cleaner or Malwarebytes. These professional anti-malware tools can detect malware on the system and eliminate it for good. Also, during a full system scan programs like these identify all malicious threats, corrupted files and cleans the system thoroughly.

Kraken Cryptor 2.2 ransomware removal is giving better results when performed with reputable tools. The manual virus elimination is not advisable, especially when it comes to notorious threats like this ransomware family. You may also need to enter the Safe Mode with Networking before scanning the system thoroughly because the virus is persistent and makes various changes on the system.

Kraken Cryptor 2.2 ransomware virus is a data-locking threat, so we understand your concerns about encrypted data. However, there is no official decryption tool developed, so you need to employ data recovery tools or restore lost files with copies from a backup. You can find a few suggestions for Data Recovery software below.

To remove Kraken Cryptor 2.2 ransomware safely from the system, you may need to reboot your device in Safe Mode with Networking. Follow this guide to know how:

You should try System Restore feature in Kraken Cryptor 2.2 ransomware removal too. This allows you to recover the previous state of the system:

Guide which is presented above is supposed to help you remove Kraken Cryptor 2.2 from your computer. To recover your encrypted files, we recommend using a detailed guide prepared by 2-spyware.com security experts.

If your files are encrypted by Kraken Cryptor 2.2, you can use several methods to restore them:

If you haven't backed your files, try Data Recovery Pro

Decryption for this variant is not possible

Finally, you should always think about the protection of crypto-ransomwares. In order to protect your computer from Kraken Cryptor 2.2 and other ransomwares, use a reputable anti-spyware, such as Reimage Reimage Cleaner Intego, SpyHunter 5Combo Cleaner or Malwarebytes

You can quickly scan the QR code with your mobile device and have Kraken Cryptor 2.2 ransomware manual removal instructions right in your pocket.