67% of Android users might become victims of Lockdroid ransomware

After downloading this app on the device, malware shows a fake “Package Installation” window. The process does not differ from ordinary app installation. Hence, users click “Continue” button thinking that they are installing necessary components. However, this button hides something serious. When the button is clicked, the Lockdroid virus shows an “Unpacking the Components” dialogue which makes the process look legitimate. Then malware shows the last dialog called “Installation is Complete.” It’s the last step to get admin rights and full access to the device. To trick victims to give privileges, the malware uses a TYPE_SYSTEM_ERROR window which is delivered on the top of the device activation dialog. Therefore, the “Continue” button is actually an “Activate” button. As you can see, Lockdroid ransomware uses a sophisticated social engineering technique to trick users and gain administrator rights. This cyber infection can cause data loss and lead to various privacy-related issues. If you haven’t encountered it, you should take all precautions to avoid it. However, if you got infected, you should scroll down to the end of this article and learn how to remove Lockdroid from the device. 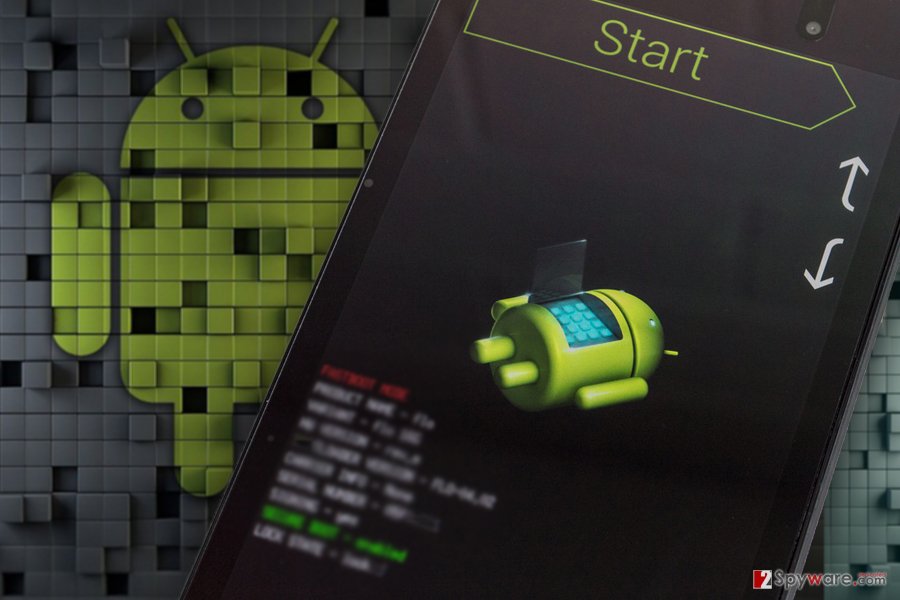 How is this malicious app being distributed?

Android ransomware along with all its variants (Android.Lockdroid.E virus included) mostly spread via fake or Trojanized apps. These apps are often distributed via third-party websites and other sources that are not reliable. Sometimes malware manages to bypass Google Play security[5]; however, it rarely happens. Google monitors all new applications distributed via Google Play, and all malicious apps are eliminated. However, developers of the malware started using social engineering techniques and infecting smartphones or tablets by tricking users into giving the admin rights. As you already know Lockdroid hijack might occur when you install adult-themed application called “Porn ‘O’ Mania.” It goes without saying that you must stay away from it. We want to point out that you can encounter many similar malicious applications from various online sources. Therefore, you should not use shady third-party sources for downloading new apps. Always rely on Google Play and read reviews from the users. It will help to learn about the application and make a decision whether it’s worth installing or not. What is more, you should strengthen your smartphone’s security with security software.

We recommend starting Lockdroid removal with scanning your device’s system. For that, you need to install malware removal software such as BullGuard Mobile Security or mobile version of Reimage Reimage Cleaner Intego. Also, you can try following these steps to remove Lockdroid malware and recover the system:

1. Reboot your smartphone into Safe Mode:

If this method does not work follow these steps:

You can quickly scan the QR code with your mobile device and have Lockdroid ransomware manual removal instructions right in your pocket.