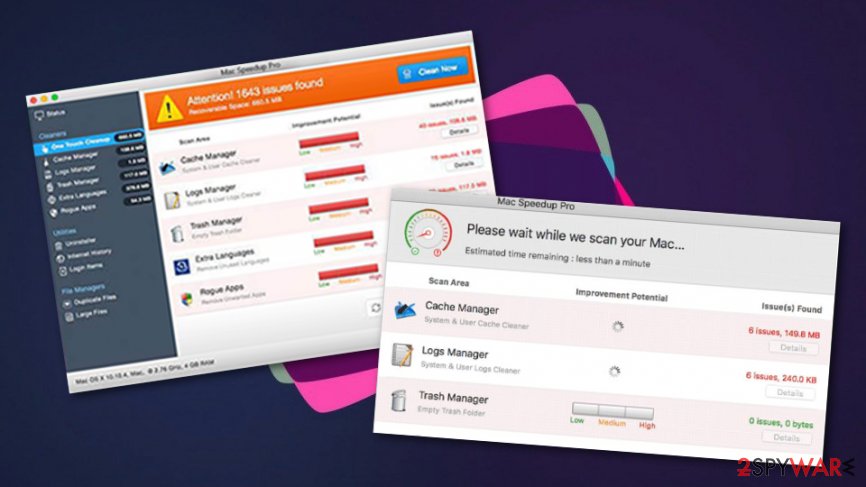 Mac Speedup Pro is a false system optimization tool[1] which does not fulfill any of its promises. This rogue application manipulates its users by providing fake system scan results which usually show numerous errors and issues found on the Mac system. However, this is done to convince victims to purchase the licensed version of the program as it is “the only way to fix your computer”. Even though this program might promote itself as a very useful tool which is worth five stars, do not fall for believing in such lies. Developers try to provide their programs as attractive as possible so users will be engaged to buy them.

Mac Speedup Pro might also drop notifications which alert that the computer system needs to be scanned, fixed, or cleaned. However, if you want to test your system and find out what kind of true problems exist, you should perform a system scan with a truly reliable computer program and then measure the results which were provided by Mac Speedup Pro virus.

We suggest declining any offers to buy the full version of the fake optimization tool. If you decide to purchase the program, it will only imitate the fixing but will not do anything that is needed. Moreover, Mac Speedup Pro optimization tool collects all outdated registry entries, software, and files, and provides them as big system issues or even threats.

We recommend performing the Mac Speedup Pro removal as this application will not bring wanted results. Choose a program such as Reimage Reimage Cleaner Intego to detect all PUP-related content and then get rid of it from the system permanently. Moreover, if you are likely to proceed with the elimination on your own, check the instructions below this article.

If you do not remove Mac Speedup Pro virus, you will be seeing pop-ups[2] and notifications from time to time. These ads will try to promote the usefulness of the fake optimization program and try to convince you to use it. Moreover, such advertising becomes very annoying and might even slow down your computing work if not removed on time. 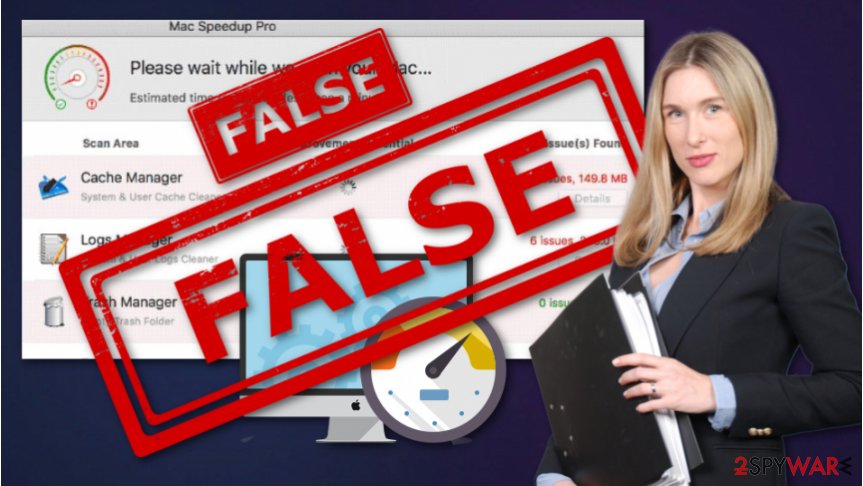 Fake system tools can be promoted via regular websites

Some developers create an original website for their product. Once the user enters such site, she/he is provided with nicely-looking writing about the program which claims about all of its useful features. We suggest closing such pages if you have entered any and declining all offers to install computer software that you are not sure about.

According to experts from NoVirus.uk,[3] fake system optimization tools, just like other potentially unwanted applications can be distributed through particular computer software or unprotected pages. Lack of protection lets the developers inject their promoted content wherever they want – into hyperlinks, advertising posts, or other programs.

To avoid the secret installation of useless apps, you should check if the Custom/Advanced mode is selected. Note that various Quick modes allow unwanted content to slip into the system very easily. Moreover, you need to be cautious by yourself while browsing the Internet sphere, accessing less-known pages, and deciding which link to click on.

If you have discovered the rogue application on your Mac computer,[4] you should get rid of the PUP rather than using it. You can remove Mac Speedup Pro virus by using expert-suggested computer programs or deleting the application by yourself. However, the first method will assure you that the program was removed safely and effectively.

While performing the Mac Speedup Pro removal on your own, you might make some mistakes. As you might understand, these mistakes might cause damage and make you struggle even more. Moreover, you need to make sure that all potentially unwanted components are fully removed, otherwise, the questionable program might still remain in the system.

[GI=safari]Take a look at the below-given steps to clean your Safari web browser if any adware-related content was found in it:[GI]

If you have found the rogue system optimization app on your Mac device, you can eliminate it by looking through these instructions:

Once these steps are finished, Mac Speedup Pro should be removed from your Microsoft Edge browser.

If the fake tool has injected any suspicious components in your Google Chrome web browser, you can get rid of them by performing this guide:

You can quickly scan the QR code with your mobile device and have Mac Speedup Pro manual removal instructions right in your pocket.