Microsoft Security Essentials Alert is a malicious warning message, pretending to be a legitimate Windows BSoD 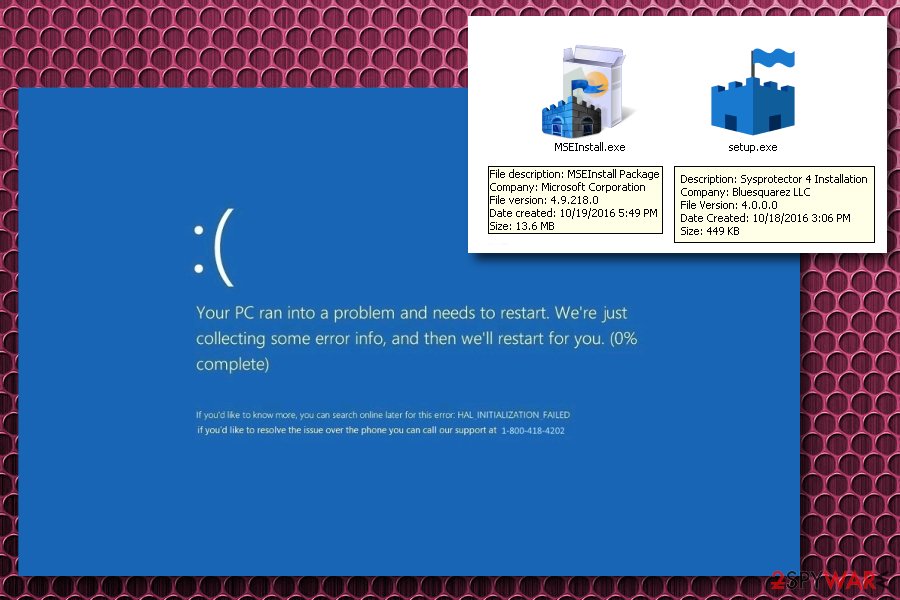 Microsoft Security Essentials Alert (otherwise known as Hicurdismos) is a tech support scam[1] that is triggered by a malicious executable running in system's background. This executable is used to mislead its victim by causing a fake warning message claiming that he or she needs to install Microsoft Security Essentials. If you have been suffering from this alert for some time, you should take into account that it can also be caused by an adware-type program[2] which has to be removed before it causes more havoc on your PC system.

The main fact, showing that you are dealing with the Microsoft Security Essentials virus or Hicurdismos, is that it has already been replaced by Windows Defender[3] in Windows 8 and 10. Thus, there is no need to install it. Nevertheless, crooks typically use social engineering techniques to convince users that the install is necessary.

As soon as victims are convinced to download and install a file called “setup.exe,” (which shows Windows Defender icon to look legitimate) Hicurdismos displayes a fake BSoD[4] error screen. BSoD is typically used by Windows to prevent system damage when things go wrong. To recover from legitimate error, users have to restart their PCs, but not in this case. The fake Microsoft Security Essentials Alert offers its victims to contact the supposed technicians by displaying such warning message:

Your PC ran into a problem and needs to restart. We're just collecting some error info, and then we'll restart for you. (0% complete)

To make the scam more real, Hicurdismos virus does the following:

Staying calm is vital because Microsoft would never ask its users to contact them via the phone. Interestingly enough, the virus targets Windows 8 and Windows 10 operating systems, no matter that Microsoft Security Essentials was initially released for Windows 7 and some earlier OS versions. Please, keep in mind that the later versions are equipped with Windows Defender by default, so you do not need to download it's earlier nor the later versions! 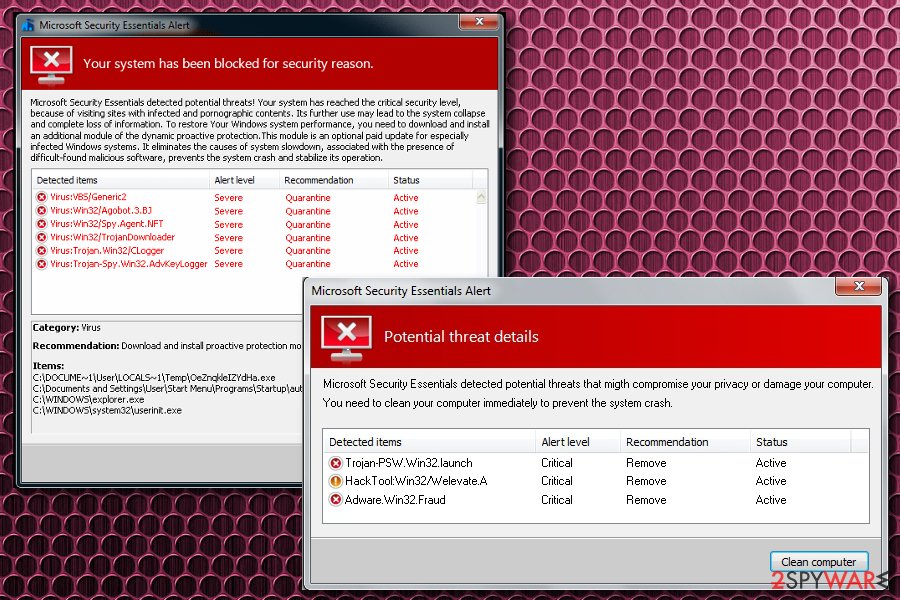 You can also run into a similar tech support scam, which is related to MSE. It is known as Microsoft Security Essential Alert and is caused by adware. This type of tech support scam tries to convince its users that their machines are infected with malware.

In reality, your PC is not infected with Trojan-PSW.Win32.launch or similar virus. The main virus, which is hiding in the system, is adware. These ad-supported programs are usually not harmful on their own, as they do not damage systems directly. However, they might trigger false messages that may lead victims to money loss or malware infections. Thus, it is essential to remove Microsoft Security Essentials Alert virus before it is too late.

It is understandable that inexperienced users might be tricked by this fake alert as it looks identical to MSE messages. Typically, victims get frightened that their computers are in imminent danger because of severe malware infections. There are many variants of Microsoft Security Essentials Alert, including:

Microsoft Security Essentials Alert
Your system has been blocked for security reason.
Microsoft Security Essentials detected potential threats! Your system has reached the critical security level, because of visiting sites with infected and pornographic contents. Its further use may lead to the system collapse and complete loss of information. To restore Your Windows system performance, you need to download and install an additional module of the dynamic proactive protection. This module is an optional paid update for especially infected Windows systems. It eliminates the causes of system slowdown, associated with the presence of difficult-found malicious software, prevents the system crash and stabilizes its operation.

It is essential not to panic and realize that the error message is fake. Microsoft would never ask users to download additional software which they need to pay for in such a way. Remember that MSE is dedicated to Windows 7 and earlier, so if you run Windows 10, you would have Windows Defender installed by default. Nevertheless, real anti-malware programs would not ask you for additional payment for removal of certain viruses.

Microsoft Securoty Essentials is a fake anti-virus program that (again) tries to make users believe that malware heavily damaged their computers. It is the latest addition to Microsoft Security Essentials Alert which is trying to lurk the world by using a well known name. The executable file which is responsible for its infiltration is called MadarchodLocker.exe.

The primary goal of the virus is to make victims download bogus software which allegedly can fix the “damaged” PC. To achieve that, Microsoft Securoty Essentials virus informs users that their system is so severely broken that Windows Defender download is impossible. In some cases, users are prompted to visit rogue websites that might be infected with malware. 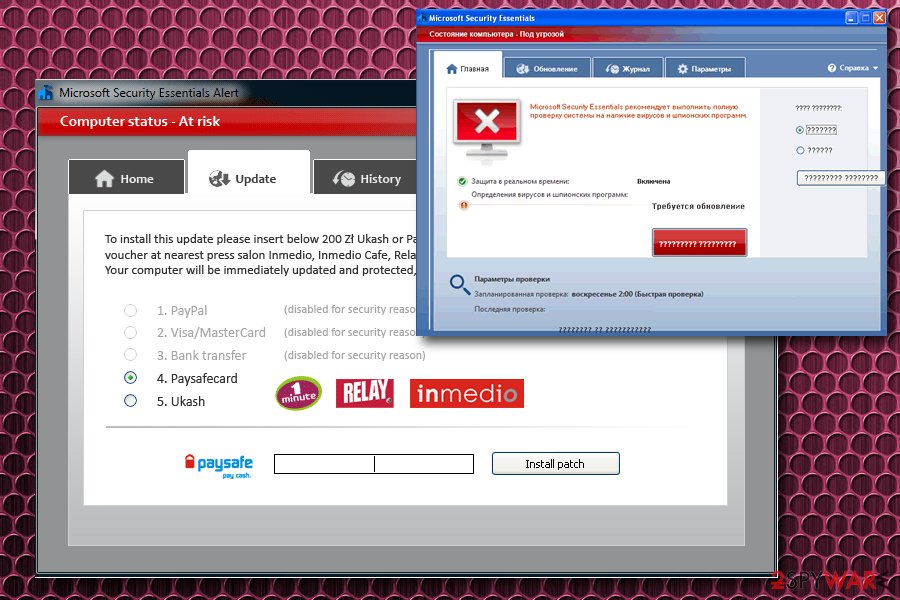 Note that the fake Microsoft Securoty Essentials might block legitimate anti-malware program from starting properly. To avoid that, reboot your PC in Safe Mode with Networking and launch security software from there. We explain how to execute the procedure below this article.

Viruses can be obtained via different methods, like bundling and social engineering

As we have already mentioned, these fake alerts can be caused by installing either malware or adware on your computer. While adware is a relatively harmless software that is created to generate adverts, malicious programs, such as Hicurdismos, can initiate serious havoc. Therefore, security researchers[6] note that it is crucial to learn how to prevent PUPs and viruses before they infiltrate the system. 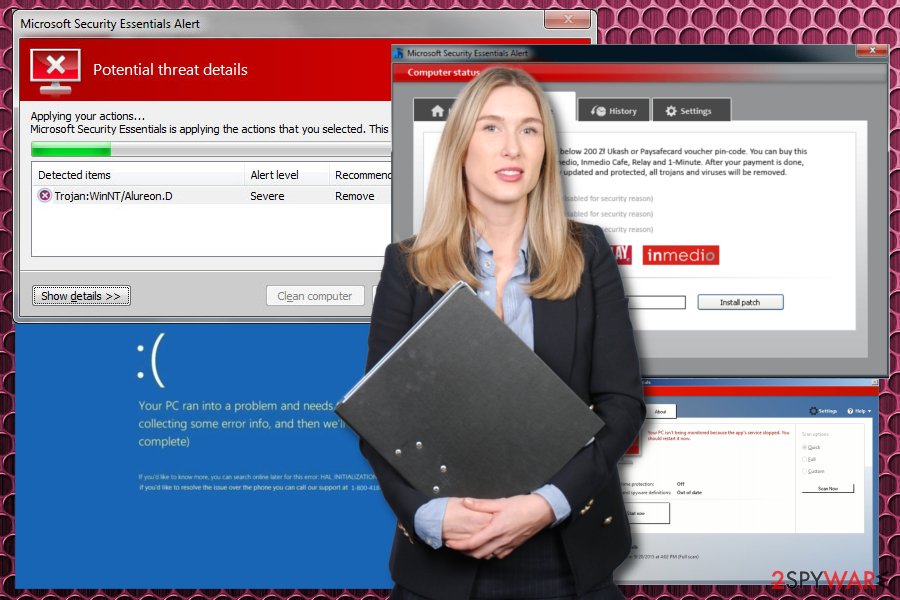 Microsoft Security Essentials Alert can be eliminated in two methods

Security blogs, websites, and forums offer numerous recommendations on Microsoft Security Essentials Alert removal, so it may sometimes be difficult to distinguish one method that is truly effective. Naturally, there are two virus removal approaches – manual and the automatic one.

The manual removal method is a long process that might result in the loss of files or even damage to the system if not carried out carefully. Apart from that, it is quite an effective way to remove Microsoft Security Essentials Alert virus from an infected PC.

Nevertheless, you can simply run a full system scan with reliable anti-spyware and bypass all the previously mentioned manual removal risks. Anti-malware utilities will remove the threat automatically. If you can't launch these applications, reboot your system into safe mode with networking first.

To eliminate fake alerts from Windows OS, follow these steps:

Once these steps are finished, Microsoft Security Essentials Alert should be removed from your Microsoft Edge browser.

It is essential to reset your browser to default after Microsoft Security Essentials Alert scam is deleted:

You can quickly scan the QR code with your mobile device and have Microsoft Security Essentials Alert virus manual removal instructions right in your pocket.