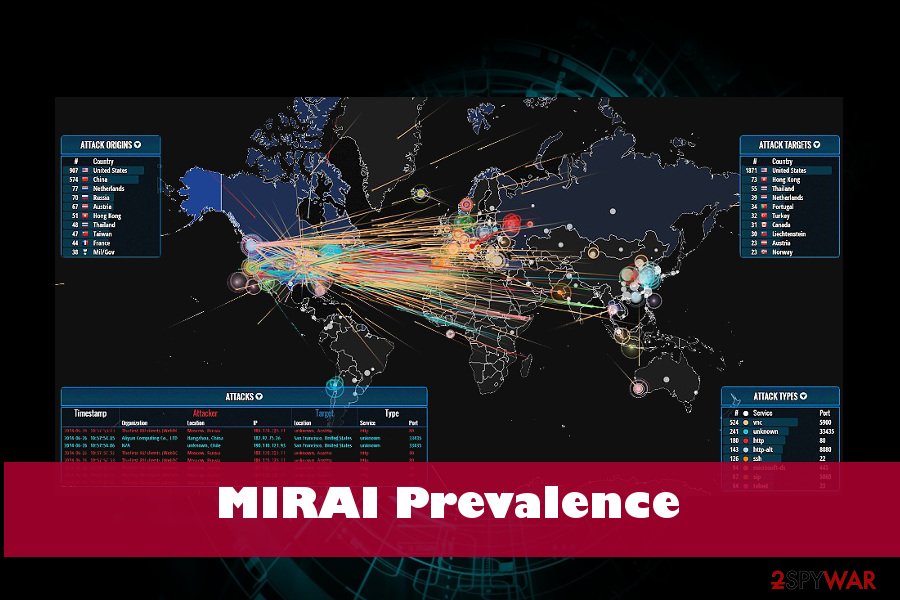 Mirai is a malware that concentrates on DDoS attacks.

Mirai botnet or Mirai virus is sophisticated malicious software that was first potted by a whitehat malware research group MalwareMustDie in August 2016. The virus focuses on abusing vulnerabilities on IoT devices that run on Linux operating system. The primary goal of Mirai was to create a worldwide botnet which hosted DDoS attacks targeted towards large organizations like DNS provider Dyn and cloud computing company OVH, as well as security website Krebs on Security, although it was also used for fraud like click-bait. According to its creator, Anna-senpai, the name of the threat came from anime series Mirai Nikki and generally means “Future” in Japanese. At the end of 2016, Mirai malware was leaked to the public for everybody else to use. Since then, multiple attacks have been launched, and the most recent one seems to be utilizing Hadoop YARN vulnerability to attack Linux machines instead of IoT devices.

In 2017, USA officials unsealed court document indicating the names of the three men responsible for the Mirai botnet development and massive DDoS attacks. Paras Jha, Josiah White, and Dalton Norman were indicted by Alaska court on multiple charges. All of them acknowledged the participation in the attacks and were plagued guilty. Each of them was imposed for up to five years imprisonment and a fine of at least $250,000.[1]

Mirai botnet and Mirai malware are the terms that are used interchangeably and can be. The core difference is that the system should initially be infected with Mirai malware to be connected to Mirai botnet later.

Mirai botnet refers to a “bot” of networked devices running Linux that are joint together and controlled remotely by a group of hackers. The interconnected devices are further scanned for IP address of Internet of things (IoT) devices. The scan allows the malware to identify the vulnerabilities in IoT devices (routers, cameras, DVRs, and other Internet of Things) by applying a table of 60 common factory default usernames and passwords.

Once the botnet detects vulnerable devices, they are infected with Mirai malware. Infected machines are initially hard to recognize as they keep working in a quite usual manner despite some periods of slowdowns or random crashes.
However, the Mirai is a severe IoT malware that can be used for launching DDoS attacks massively and causing real havoc on the Internet infrastructure worldwide.

Security researchers at NETSCOUT ASERT spotted[2] a new variant of Mirai which avoids IoT devices and seeks to infect Linux operated servers instead. It abuses Hadoop YARN vulnerability CVE-2017-15718[3] that can execute arbitrary shell commands on an unpatched server. According to research, there are over 1,000 vulnerable servers that are exposed.

In November alone, experts observed 225 unique attacks, from which 152 were delivered from one address. A large amount of exploit attempts coming from only a few sources led researchers to the conclusion that there is only a small number of attackers who are scanning the internet to exploit the vulnerable machines (Mirai does not rely on a botnet to propagate). This time, bad actors depend on x86 machines only, as Hadoop YARN (Yet Another Resource Negotiator) services are only running on x86 Linux servers.

One of the variants observed by researchers was called VPNFilter, although it has nothing to do with the sophisticated malware that infected 500,000 devices in May. 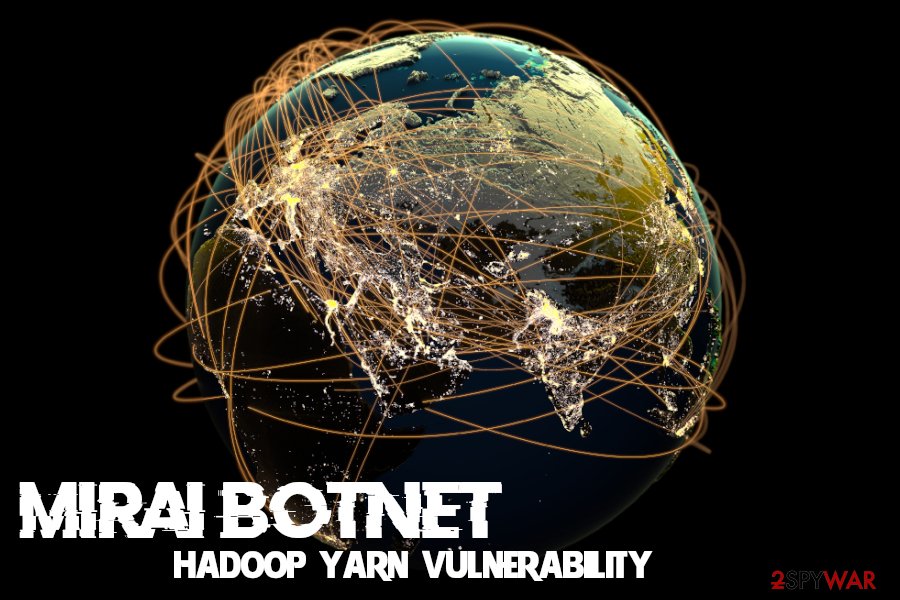 Hadoop YARN vulnerability is being used by Mirai to infiltrate Linux-based servers.

Mirai virus[4] got into the spotlight again after disrupting the Internet connection for German telecommunication company, Deutsche Telecom, users[5]. While the virus occasionally appeared here and there since then, daily Internet users might not have worried about its threatening presence. However, the attack against Deutsche Telecom has been a serious warning for the entire virtual community.

After updating its source code, hackers employed the malware for disabling the Internet connection for about million users of Deutsche Telecom customers. Specialists suspect that the cyber criminals did not plan to shut down the connection but merely steal vital information from the affected devices. However, as the server was overloaded with malware signals, the campaign did not work out as expected.

Luckily, only 5% of all clientele might have suffered from the cyber attack. Zyxel routers happen to be one of the most vulnerable devices[6]. Though virus researchers expect the malware to slow down in the following days, signs of related DDoS attacks have been traced to Africa. What is more, the origin of September attacks on Japan’s defense and SDF (Self Defense Forces) and Korea’s military cyber systems are questioned as well. Such Internet disrupting cyber assaults were not the only ones recently. Last month, several US telecommunications companies experienced a similar attack.

The origin of the Mirai

Mirai malware is supposedly originated from Japan as the title means “future” in Japanese[7]. What is more, is an author is expected to be a user under the pseudonym “Anna-senpai”[8]. The very name originated from Japanese anime culture. Though daggers are pointed to Japanese hackers, these attacks are most likely the wrongdoings of foreign cyber criminals.

However, international racketeers have joined this ominous business as the latter version of Mirai (Linux.Gafgyt.B) might have come from Brazil. Brazilian hackers have been the primary suspects for launching banking trojans. The original version of Mirai malware targets mainly IoT technologies and Linux systems. By exploiting vulnerable IoT devices, the virus turns them into a virus-distributing botnet. Mirai network has been used for delivering massive DDoS (distributed-denial-of-services) attacks as well. 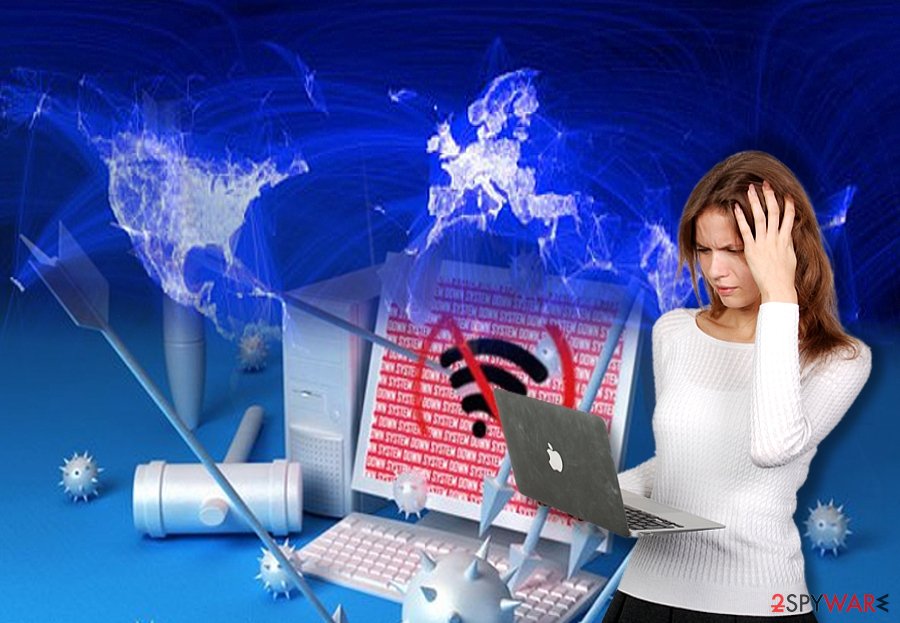 Within a year since 2016 to 2017, the group of three American programmers managed to infect more than 100,000 computing devices and connected them to a bot, later named as Clickfraud.

The Mirai and Clickfraud botnet schemes are powerful reminders that as we continue on a path of a more interconnected world, we must guard against the threats posed by cybercriminals that can quickly weaponize technological developments to cause vast and varied types of harm.

The scheme earned Jha and his team nearly 100 bitcoin, which was worth then approximately $180,000. Currently, the earning would exceed $7.5 million

Jha, the developer of Mirai malware's source code, has released it publicly a week after the massive DDoS attack was being held. It has been first published in the English-language hacking community called Hackforums. Disguised under the nickname “Anna-senpai,” the Jhas told community members:

When I first go in the DDoS industry, I wasn’t planning on staying in it long,” Anna-senpai wrote. “I made my money, there are lots of eyes looking at IOT now, so it’s time to GTFO [link added]. So today, I have an amazing release for you. With Mirai, I usually pull max 380k bots from telnet alone. However, after the Kreb [sic] DDoS, ISPs been slowly shutting down and cleaning up their act. Today, the max pull is about 300k bots and dropping.

Once the Mirai botnet source code has been unraveled, cybercriminals started exploiting it for multiple DDoS attacks against Internet infrastructure and websites.

Currently, there altered versions of Mirai have been spotted on the Internet. Mirai Okiru Botnet[10] is one of the examples. Experts spotted it at the beginning of 2018 by MalwareMustDie team. It targets ARC-based embedded devices running Linux operating system.

In February, FortiGuard Labs research team found another botnet dubbed OMG, which has been found selling credential access to the proxies for profit. According to experts,[11] OMG report uses the original Mirai module that kills processes, scan for vulnerabilities, use brute-force login attacks, and eventually cause DDoS attacks. However, it renders two random ports to set up 3proxy.

Thus, despite the fact that the initiators of the Mirai botnet have been arrested and jailed last year, the released source code allows crooks to keep distributing the malware worldwide. 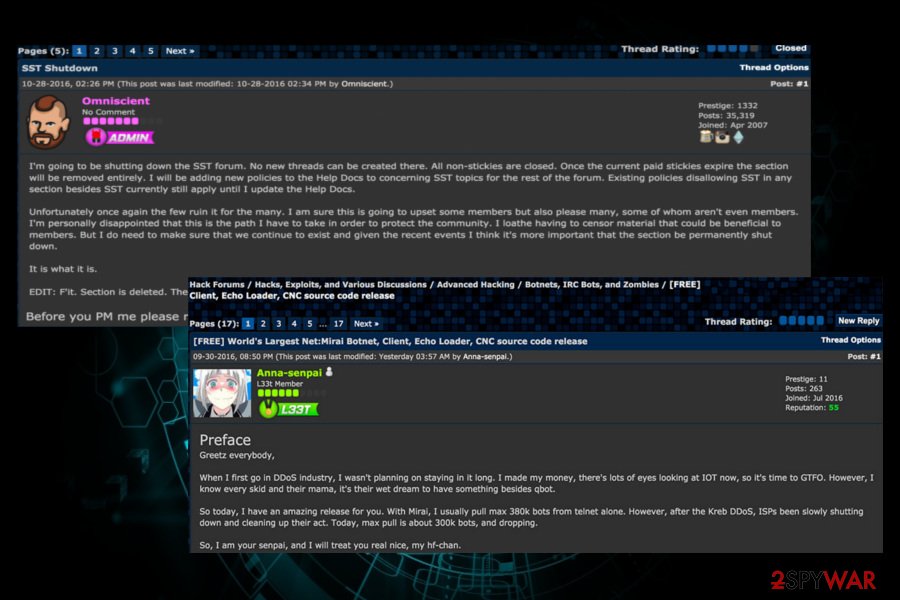 Since the malware exploits the vulnerabilities in the specific devices, manual tracking Mirai botnet might be a futile task. If you are about to purchase IoT device, look up its manual and identify its manufactured company. After obtaining the device, change the default password into a long code containing marks, characters, and numbers. You might also set an elaborate encryption technique to your Wi-FI or wired Internet network. Modifying security settings is a useful prevention method as well. Turn off Telnet login and employ SSH. Check your IoT manufacturer for latest updates.

Though Mirai virus mainly attacks IoT devices, it is destructive to think that Windows OS or Mac OS owners users are safe from this cyber misfortune. Since the developers got determined to surprise the world with unseen hijack techniques, arming with reliable protection is of primary importance. In the case of mentioned operating systems, you can remove Mirai by using Reimage Reimage Cleaner Intego or Malwarebytes.

Keep in mind that the utilities have to be updated for them to work properly. In order to terminate Mirai hijack, disconnect from the internet and enter Safe Mode with networking. Further instructions will explain in detail how to do that. They will also come in handy if you cannot complete Mirai removal.

If you suspect that Mirai worm or similar threat has invaded your device, you might enter Safe Mode and scan your system with an anti-spyware tool.

Guide which is presented above is supposed to help you remove Mirai from your computer. To recover your encrypted files, we recommend using a detailed guide prepared by 2-spyware.com security experts.

If your files are encrypted by Mirai, you can use several methods to restore them:

Finally, you should always think about the protection of crypto-ransomwares. In order to protect your computer from Mirai and other ransomwares, use a reputable anti-spyware, such as Reimage Reimage Cleaner Intego, SpyHunter 5Combo Cleaner or Malwarebytes

You can quickly scan the QR code with your mobile device and have Mirai virus manual removal instructions right in your pocket.