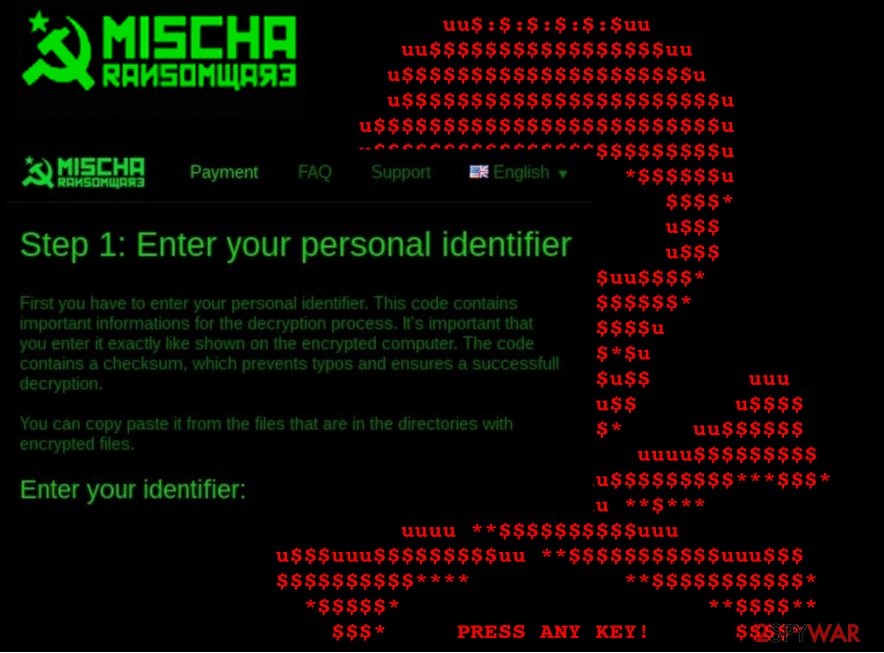 Mischa ransomware is a computer virus, affectionally addressed by its creators as a “little brother” of the infamous Petya virus[1] which recently became even more dangerous by employing a new tactic for extorting money from the infected computer users. It installs the already mentioned Mischa virus if the infiltration of the initial ransomware is unsuccessful, this way, protecting itself against failure.

If you are not yet familiar with the mechanics of the ransomware viruses, you should know that these programs infiltrate the users’ computer by deception and encrypt the containing data using an algorithm which is, to this day, impossible to crack.

Finally, the victim receives a note, in which he/she finds an indicated sum of money the ransomware developers demand in exchange of the files. It is not recommended to follow any of these instructions as you may end up with no files and robbed of your money as well. Instead, you should remove the virus from your computer immediately. Sophisticated anti-malware tools, such as ReimageIntego, may help you in the process.

Recently, the creators of Mischa and Petya viruses initiated a Janus Cybercrime Solutions campaign which offers the regular users to become affiliates in ransomware distribution. After issuing a registration fee, the user is granted the name of an official distributor and can start making money. The share affiliates receive is calculated according to the payment volume they manage to generate in a week.

The larger the volume, the more you earn. Though taking part in such shady businesses is, obviously, very dangerous and illegal, it is likely that some evil-minded individuals will sign up. Thus, these infections will become even more dangerous. We encourage you to take all measures possible to protect your system before it is too late. 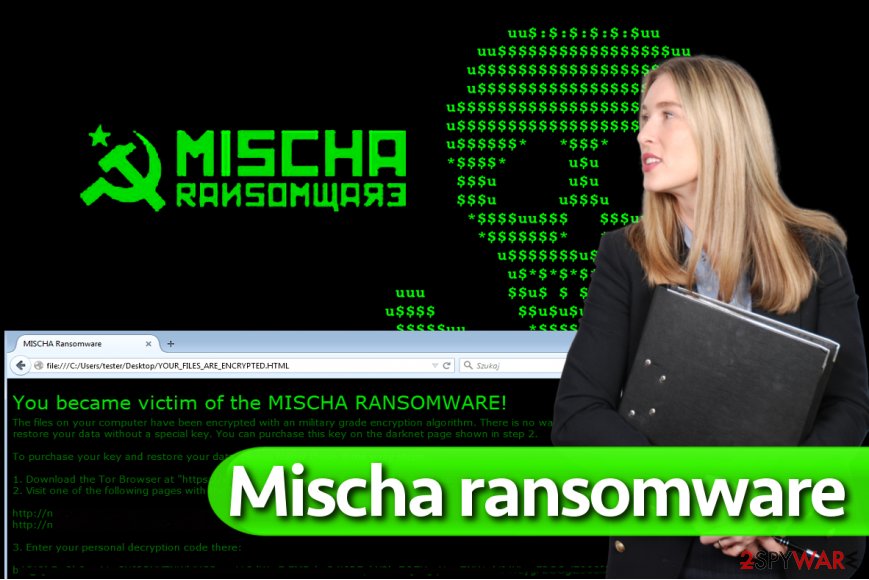 Mischa ransomware virus encrypts files and demands ransom. In most cases, Mischa is distributed in tandem with Petya ransomware.

How does this ransomware act on the infected computer?

Since the mechanics of Petya virus are much more complicated, and it requires to gain an administrative privilege to initiate its malicious processes, the rather simple way Mischa infiltrates the system is a convenient backup plan for the Petya virus.

Unlike Petya, which needs administrative privileges to modify the master boot record (MBR), Mischa is simply installed on the computer and immediately starts scanning it for files. This virus, as well as the majority of other ransomware, targets documents, videos, images, archives but may easily infect applications, i.e. the .exe files, as well.

Once the encryption is completed, an additional 4-digit extension is then added to the infected documents and applications. From this point on, the files on the computer are not accessible anymore.

As soon as the users realize that they have lost access to their data, the ransomware drops documents labeled as YOUR_FILES_ARE_ENCRYPTED.HTML and YOUR_FILES_ARE_ENCRYPTED.TXT to every folder of the corrupted device. In these documents, the ransomware developers state their conditions. At the moment, the victims are asked to pay 1.93 Bitcoins (which is equal around $875 USD) for the decryption key.

However, there is no guarantee that the sum will not be increased. Next in the ransom note are the links to TOR network websites, through which the victim must transfer payment. The user is given a special code which he/she has to submit upon paying the ransom. Unfortunately, there is no way to decrypt the locked files without paying. But transferring money to some obscure cyber criminals’ account is not the best idea either.

The best option, in this case, is to remove Mischa virus from the infected computer and recover files from a backup. You can also try to restoring them using special data recovery tools.

GoldenEye is a ransomware duo including Petya and Mischa virus. Once run, the virus saves itself in %APPDATA% folder under the name of the random system application. It automatically launches and starts encrypting victim's files.
The malware attempts to bypass UAC and to launch the second attack using Petya ransomware.

The virus easily bypasses UAC if it is set to default or lower. In case it is set to max, the UAC window keeps appearing repeatedly until the victim allows the program to make changes to the computer.

The low-level part (in case the victim doesn't allow the program to make changes via UAC) uses Petya ransomware, which performs Master File Table encryption. The ransomware then displays a yellow blinking screen with a skull on it. The  GoldenEye ransomware was later distributed via an affiliate scheme, although before it has been circulated via phishing emails mostly.

Mischa not involved in the latest global cyberattack

The cyber attack that took place on June 27-28 in 2017[2] has wreaked havoc on thousands of computers worldwide, primarily in Ukraine. Most affected countries were UK, Germany[3], France, and many others.

Presumptions that it was Petya ransomware were denied because it was actually a modified version of the virus. In fact, the developers of the real Petya/GoldenEye/Mischa viruses verified that the ransomware used in the cyber attack wasn't Petya.

Therefore, the infamous virus quickly dubbed as NotPetya or ExPetr. However, it shortly became clear that the ransomware used in June 2017 cyber attack wasn't even a ransomware – it worked as a wiper that destroys files and leaves no possibility to recover them.

It turned out that NotPetya was generated random code shown as victim's ID. It means that even cyber criminals cannot get any decryption information from such string; therefore they can't help victims even if they decide to pay the ransom. Apparently, if you became a victim, do not pay up. It won't help you to restore files no matter what.

The good thing is, after the global NotPetya attack, the developer of Petya/Mischa/GoldenEye released the master decryption key, allowing victims to retrieve their files for free. To recover files encrypted by this ransomware, use instructions provided below the article. Before you attempt to use the decrypter, take care of Mischa removal first.

How can Mischa infect your computer?

Usually, the malicious Petya-Mischa bundle travels via deceptive emails, which feature a link to an online cloud containing a PDF file of a supposed job application. In reality, there is no job application and by clicking the indicated link, the user simply downloads the executive virus file on the computer.

Once downloaded the file will look like a regular PDF document. If the user opens this file, a malicious script activates the virus, and the virus installation begins. First, the executive file will try to install Petya. If for some reason, that fails, Mischa ransomware will then be installed on the computer.

A way to avoid having your computer infected with a ransomware virus is by obtaining a reputable antivirus software, which will provide you with some extra protection against these viruses. Also, you should be especially careful with your email as well.

Stay away from the “Spam” catalog as most of the malicious emails usually end up there. You should always pay attention to the received emails, and look for clues such as grammar and spelling mistakes, insisting tone and similar suspicious characteristics. Most importantly, you should keep a backup of your files in some external storage drive and update it regularly.

However, we have to warn you not to leave the drive plugged in at all times because the Mischa virus can easily infiltrate and encrypt the files in your external drive as well.

Removing Mischa ransomware from the system

To make your PC function normally again, the only option you have is to remove Mischa virus from your computer. Unfortunately, the virus removal will not return your files, but if you want to keep using your device normally again, you must clear it of all the malicious components.

For that, you should use sophisticated and acknowledged antivirus utilities. But remember, this ransomware attempts to stop security programs from running, so your antivirus may struggle to remove the threat. In this case, you can try decontaminating the virus manually by closely following Mischa removal instructions provided below. Just do not forget to scan your computer after you remove the virus to make sure no malicious residue files are left on your PC!

Removing Mischa can be hard. We strongly suggest you to reboot your PC into Safe Mode with Networking to initiate the removal process. Otherwise, you might not be able to run your security programs at all. Remember – do not attempt to remove the virus manually unless you are a professional malware analyst.

If the first option didn't help with Mischa removal, try this one.

Guide which is presented above is supposed to help you remove Mischa from your computer. To recover your encrypted files, we recommend using a detailed guide prepared by 2-spyware.com security experts.

Lately, the developer of Petya and Mischa viruses, known as “Janus,” released a master decryption key. Soon enough malware analysts created a free decryption tool that helps to recover files encrypted by Mischa/Petya/GoldenEye. You can find its download link down below.

If your files are encrypted by Mischa, you can use several methods to restore them:

Finally, you should always think about the protection of crypto-ransomwares. In order to protect your computer from Mischa and other ransomwares, use a reputable anti-spyware, such as ReimageIntego, SpyHunter 5Combo Cleaner or Malwarebytes

You can quickly scan the QR code with your mobile device and have Mischa ransomware virus manual removal instructions right in your pocket.