Mmrac is a ransomware-type virus that was first spotted attacking Windows computers in January 2022. Just like any other malware of this kind, it gains access to a Windows computer by using some type of phishing or social engineering (usually infected emails), although insufficient security measures such as weak RDP[1] passwords, installed vulnerable software, lack of effective anti-malware software, can also be the main culprits of the infection.

As soon as it manages to enter the system, it does not immediately begin data encryption, as it needs to make several changes for that to happen successfully – removal of Shadow Copies, registry modification, establishing of malicious process, to name a few. After compromising Windows, Mmrac ransomware begins to look for files to encrypt, as its main goal is not to destroy system files but rather prevent users from accessing their documents, pictures, videos, etc.

Suchlike files are then rendered inaccessible, and they receive a .Mmrac extension. They are also stripped of their original icons, so it is very easy to notice that something is not right. Upon trying to open an encrypted file, victims would be shown an error, regardless of which program they would try to open them with. Data encryption and infection processes usually last mere seconds, so interrupting them is almost impossible.

Once the data is locked, the virus then generates a ransom note titled MRACReadMe.html and places it on the desktop and other locations. Essentially, it is the main communication method between the attackers and users, as it holds the contact details and other important information within. In this case, crooks are asking their victims to either send them an email via veronikstreem@protonmail.com or contact them via XMPP client Psi+, for which they are given login details.

Ransomware has a relatively long history under its belt and has been evolving for years now. What initially was a screenlocker is now something that manages to snatch people's files from them – which could be extremely valuable – and hold them behind a ransom request. These are always paid in Bitcoin or another cryptocurrency for anonymity purposes, and the size of these ransom payments varies greatly.

When it comes to the Mmrac files virus, it seems like the attackers took the most recent trend of firstly copying personal files before encrypting them. This action can be particularly damaging to companies and businesses, as companies' secret files could be leaked to competitors and other unauthorized parties. This is also one of the reasons why ransomware attacks are also considered data breaches – personal information of employees or customers can also be stolen. Malware can also affect the security of the breached systems, servers, and networks and make them more vulnerable to other attacks.

According to the ransom note, there is “nothing personal” about the attack, and it is all about money extortion:

Your information has been stolen and encrypted. All information may be in the public domain

There will be one added contact to which you can write.

While cooperating with the cybercriminals might seem like a good idea initially (they might not ask a lot for decryption in some cases), it is actually the worst idea to follow. They might never provide you with a decryptor after you send them money. In fact, they might not even have a working one or send you an infected file instead. The act of paying a ransom also reinforces the idea that the illegal business works as intended and only encourages crooks to create more malware and infect more people.

Ransomware victims are often puzzled on how to proceed after being infected, as they usually never had to deal with it before. It is true that certain procedures are to be followed in order to minimize the damage caused by the malware, and we are here to help you to follow the procedure correctly.

The first step that is absolutely vital for the correct Mmrac virus removal process is to disconnect the computer from the internet and the network if it was connected to it. Ransomware operators can send the commands for the virus to perform additional actions or even upload additional modules or payloads.

If your computer is not connected to a network, you can simply remove the ethernet cable or disconnect yourself from WiFi via the taskbar. Alternatively, you could simply perform the following actions to disconnect all the machines at once:

Once your system is disconnected from the device, you can then perform a full system scan with SpyHunter 5Combo Cleaner, Malwarebytes, or another powerful security software to eliminate the infection. It is true that ransomware can often self-destruct after performing its job of data encryption, although it might not always be the case. Likewise, ransomware is often propagated along with other computer infections (mostly data-stealing Trojans), which can cause additional damage to personal safety and computer security.

The final step is to attempt to recover the locked data. There are a lot of misconceptions among users about how the encryption works and what the files actually become once they get affected by ransomware. Some people believe that they can restore their files as soon as they scan their computer with anti-malware or that their files are permanently corrupted as soon as they get encrypted – none of these are true.

The truth is that encryption algorithm such as AES or RSA,[2] (or a combination of those) if applied correctly, is extremely secure and can't be broken even by the most sophisticated supercomputers. That being said, it does not mean that the data affected is corrupted – it simply needs a unique key, which is held on the attacker's servers.

This is why the best mitigation technique is to make secure backups for personal files. Unfortunately, many users are unprepared for the attack and rarely have working backups ready. In this case, there are few chances of restoring the encrypted Mmrac files successfully unless a decryptor is created by security researchers. Nonetheless, you could try using recovery software which could be successful in restoring at least some of the lost data:

Note: before you proceed with this step, please make copies of the original encrypted files to ensure they don't get corrupted.

Decryption tools might also be created for certain ransomware strains thanks to the efforts of security researchers. In some cases, law authorities seize the servers of malicious actors,[3] which allows the keys to be released by the public – this is usually done by reputable security vendors. Here are a few links you might find useful: 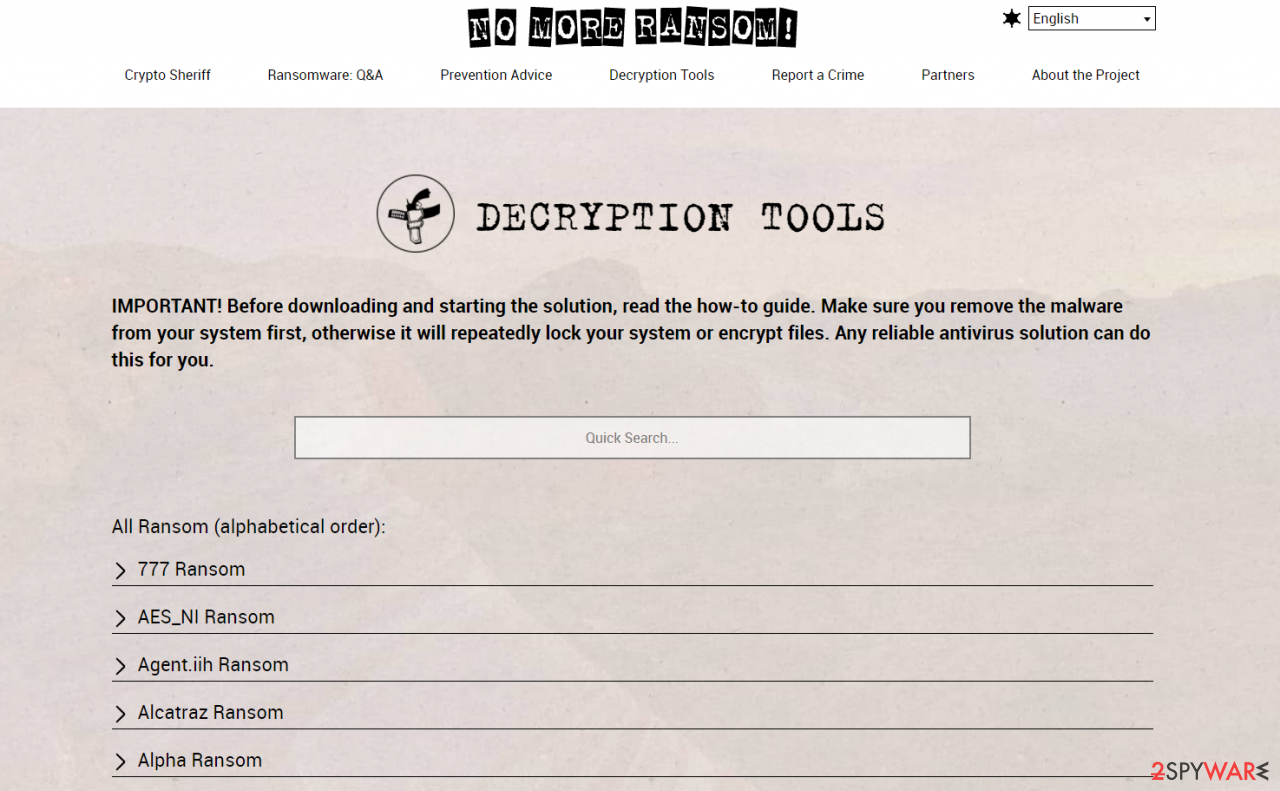 After you have removed malware from your system and attempted to recover your files, there are a few other things you could do. First of all, you should report the incident to the authorities.

Ransomware is a huge business that is highly illegal, and authorities are very involved in catching malware operators. To have increased chances of identifying the culprits, the agencies need information. Therefore, by reporting the crime, you could help with stopping the cybercriminal activities and catching the threat actors.

Make sure you include all the possible details, including how did you notice the attack, when it happened, etc. Additionally, providing documents such as ransom notes, examples of encrypted files, or malware executables would also be beneficial. Law enforcement agencies typically deal with online fraud and cybercrime, although it depends on where you come from. Here is the list of local authority groups that handle incidents like ransomware attacks, sorted by country: 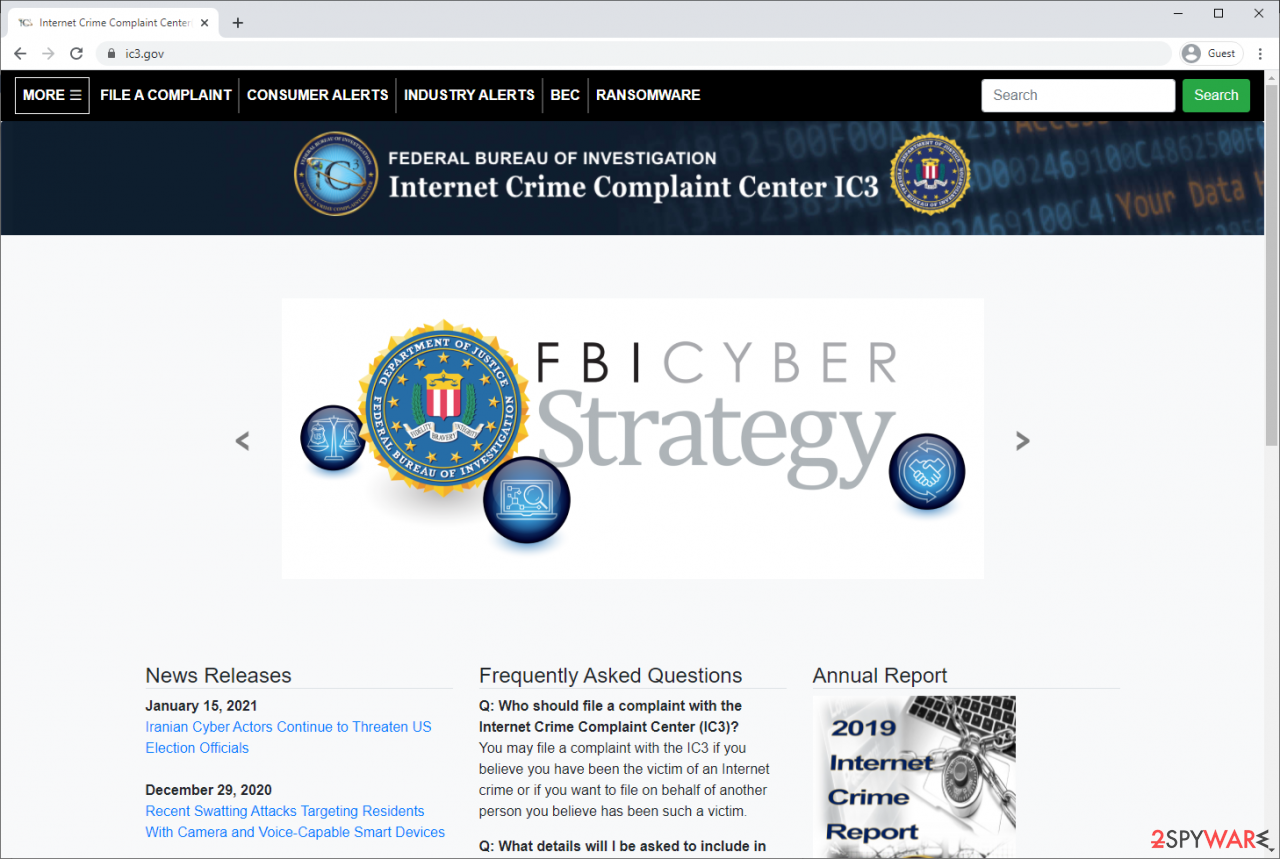 Finally, you should take care of your system integrity. Once malware compromises a Windows computer, it might damage some system files, and anti-malware is incapable of replacing or repairing them. As a result, ransomware victims might later experience all sorts of inconveniences related to computer performance – crashes, errors, lag, and similar issues are common. While reinstalling the system would fix these problems, it is not always the optimal solution.

Instead, we recommend performing a full system scan with powerful PC repair software that could fix damaged system components automatically and also clean the junk files for better performance.

Offer
do it now!
Download
Reimage Happiness
Guarantee Download
Intego Happiness
Guarantee
Compatible with Microsoft Windows Compatible with macOS What to do if failed?
If you failed to fix virus damage using Reimage Intego, submit a question to our support team and provide as much details as possible.
Reimage Intego has a free limited scanner. Reimage Intego offers more through scan when you purchase its full version. When free scanner detects issues, you can fix them using free manual repairs or you can decide to purchase the full version in order to fix them automatically.

How to prevent from getting ransomware

If this free guide helped you and you are satisfied with our service, please consider making a donation to keep this service alive. Even a smallest amount will be appreciated.